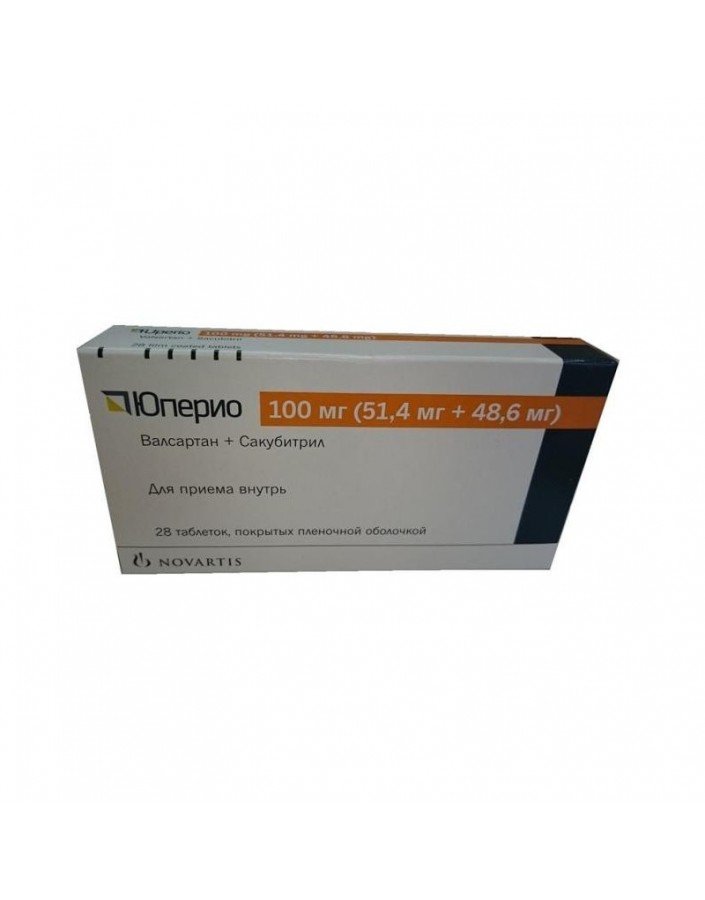 Active ingredient: sacubitrile and valsartan hydrate complex of sodium salts - 113.103 mg (in terms of acid form anhydrous 100 mg, which is equivalent to 48.6 mg of sacubitrile and 51.4 mg of valsartan);

Tablets for ingestion of 28 pieces per pack

The action of the drug Yuperio is mediated by a new mechanism, namely: the simultaneous suppression of the activity of neprilysin (neutral endopeptidase (neutral endopeptidase, NEP)) with LBQ657 (the active metabolite of sacubitrile) and blockade of receptors for angiotensin II of the 1st type (AT1) valsartan and that is a virus that is an antiviral receptor that is an antiviral receptor blockade of type 1 angiotensin II (AT1) valsartan, which is an antifungal receptor blockade. II (APA II). The mutually complementary beneficial effects of sacubitril and valsartan on the cardiovascular system and kidney condition in patients with heart failure are due to an increase in the number of peptides cleaved by neprilisin (such as natriuretic peptides (NP)), which is mediated by LBQ657, and the negative effects of angiorensin II are suppressed by valsartan.

Chronic heart failure (NYHA Class II-IV) in patients with systolic dysfunction to reduce the risk of cardiovascular mortality and hospitalization for heart failure.

The time of taking the drug Juperio does not depend on the time of eating.

In patients who have not previously received therapy with ACE or APA II inhibitors, or who have received these drugs in low doses, the patient should be given 50 mg (25.7 mg + 24.3 mg) 2 times a day with a slow dose increase ( doubling the daily dose 1 time in 3-4 weeks).

Use of the drug Yuperio is possible not earlier than 36 hours after discontinuation of the ACE inhibitor, since in case of simultaneous use, angioedema may occur.

Since ARPA II valsartan is part of the drug, it should not be used simultaneously with another drug that includes ARA II.

If patients have problems with the tolerability of the drug Yuperio (clinically pronounced decrease in blood pressure, hyperkalemia, impaired renal function), consider a temporary dose reduction or dose adjustment of concomitant medications.

At a temperature not higher than 25 ° С. Keep out of the reach of children.