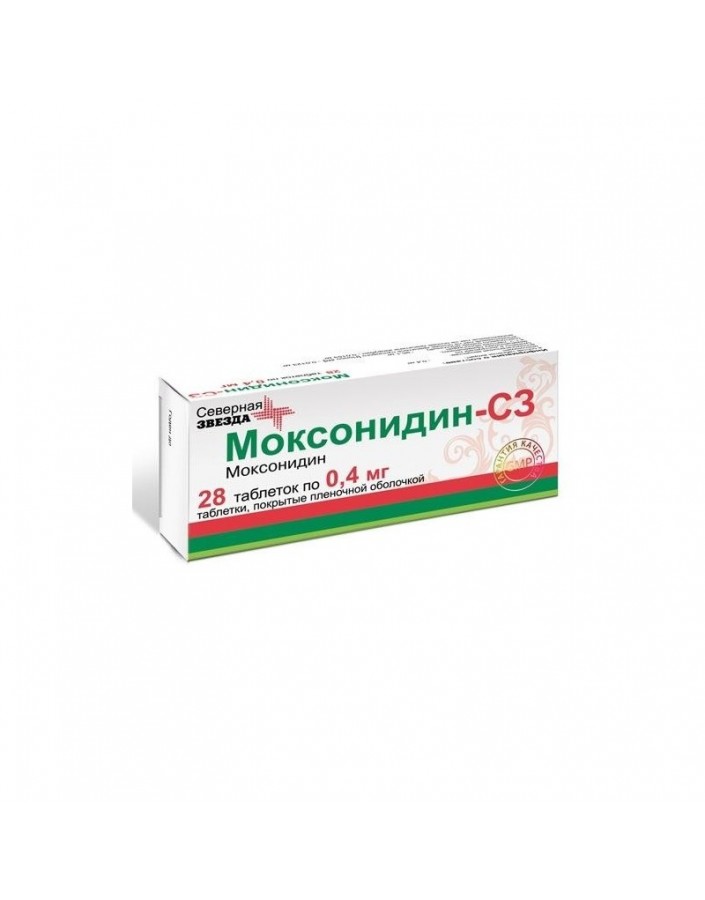 Pharmacotherapeutic group of the drug: Antihypertensive agent of central action.

Moxonidine is a hypotensive agent with a central mechanism of action. In the brain stem structures (rostral layer of the lateral ventricles), Moxonidine selectively stimulates imidazolin-sensitive receptors that are involved in the tonic and reflex regulation of the sympathetic nervous system. Stimulation of the imidazoline receptor decreases peripheral sympathetic activity and blood pressure (BP). Moxonidine differs from other sympatholytic antihypertensive drugs by its lower affinity for α2-adrenoreceptors, which explains the lower likelihood of developing a sedative effect and dry mouth. Acceptance of moxonidine leads to a decrease in systemic vascular resistance and blood pressure. Moxonidine improves by 21% the insulin sensitivity index (compared to placebo) in patients with obesity, insulin resistance, and a moderate degree of arterial hypertension. Pharmacokinetics

After oral administration, moxonidine is rapidly and almost completely absorbed in the upper gastrointestinal tract. Absolute bioavailability is approximately 88%. Time to reach maximum concentration; about 1 hourEating does not affect the pharmacokinetics of the drug.

Communication with plasma proteins is 7.2%.

Moxonidine is not recommended for use in patients younger than 18 years, and therefore in this group pharmacokinetic studies have not been conducted. Pharmacokinetics for renal failure

- hypersensitivity to the active substance and other components of the drug;

- simultaneous use with tricyclic antidepressants (see the section "Interaction with other drugs");

- age up to 18 years (due to the lack of data on safety and efficacy).

Clinical data on the use of moxonidine in pregnant women are not available. In animal studies, the embryotoxic effect of the drug was established. Moxonidine should be administered to pregnant women only after a thorough assessment of the risk-benefit ratio, when the benefit to the mother outweighs the potential risk to the fetus. Lactation period

Moxonidine passes into breast milk and therefore should not be administered during breastfeeding. If you need to use Moxonidine during lactation, breastfeeding should be stopped.

The effect of Moxonidine on the ability to drive a vehicle or control equipment has not been studied. However, taking into account the possibility of dizziness and drowsiness, patients should be careful when engaging in potentially hazardous activities that require increased attention, such as driving a vehicle or controlling equipment that requires high concentration of attention.

From the side of the central nervous system: Often: headache *, dizziness (vertigo), drowsiness. Infrequently: faint *.

On the part of the gastrointestinal tract: Very often: dryness of the oral mucosa. Often: diarrhea, nausea, vomiting, dyspepsia .

On the part of the organ of hearing and labyrinth disorders: Infrequently: ringing in the ears.

The combined use of moxonidine with other antihypertensive drugs leads to an additive effect. Tricyclic antidepressants can reduce the effectiveness of centrally acting antihypertensive drugs, and therefore they are not recommended in conjunction with moxonidine. Moxonidine can enhance the action of tricyclic antidepressants, tranquilizers, ethanol, sedatives and hypnotics. Moxonidine can moderately improve impaired cognitive function in patients receiving lorazepam. Moxonidine may enhance the sedative effect of benzodiazepine derivatives when administered concurrently. Moxonidine is secreted by tubular secretion. Therefore, its interaction with other drugs secreted by tubular secretion is not excluded. Beta-adrenergic blockers enhance bradycardia, the severity of negative insomnia and dromotropic action.

There is no specific antidote. In the case of a pronounced decrease in blood pressure, it may be necessary to restore the circulating blood volume due to the administration of fluid and dopamine (injection). Bradycardia can be stopped by atropine (injectable). In severe cases of overdose, it is recommended to carefully monitor impairment of consciousness and avoid respiratory depression. Alpha-adrenoreceptor antagonists can reduce or eliminate the paradoxical hypertensive effects of moxonidine overdose. Moxonidine is slightly excreted during hemodialysis.

In a dry, dark place, at a temperature not higher than 25 ° C. Keep out of the reach of children.

3 years. Do not use beyond the expiration date printed on the package.