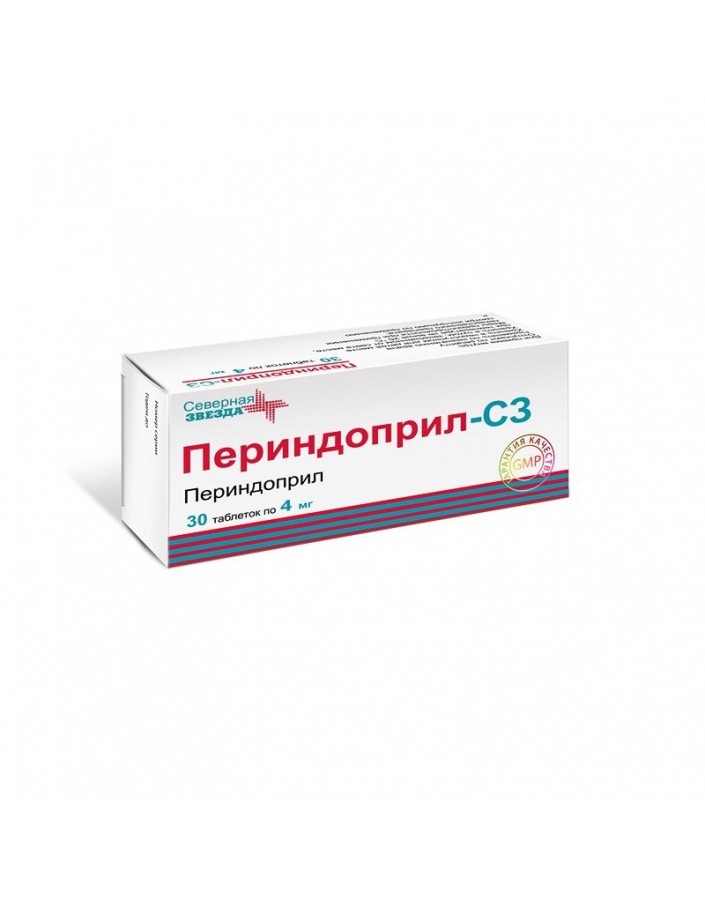 Prevention of recurrent stroke (combination therapy with indapamide) in patients who have had a stroke or transient cerebral circulation in ischemic type.

Metabolism: hypoglycemia, hyperkalemia, reversible after discontinuation of the drug, hyponatremia.

From the reproductive system: erectile disfunction.

From the laboratory indicators: increased activity of hepatic transaminases and bilirubin in the serum, increasing the concentration of urea and creatinine in the blood plasma.

Angioedema in history, simultaneous use with aliskiren and aliskiren-containing drugs in patients with diabetes mellitus or renal impairment (GFR <60 ml / min / 1.73 m2), pregnancy, lactation, children and adolescents up to 18 years of age, hypersensitivity to perindopril, hypersensitivity to other ACE inhibitors.

Perindopril is contraindicated for use during pregnancy and lactation (breastfeeding).

Cases of arterial hypotension, syncope, stroke, hyperkalemia, and impaired renal function (including acute renal failure) have been reported in susceptible patients, especially when used concomitantly with drugs that affect RAAS. Therefore, double blockade of RAAS resulting from the combination of an ACE inhibitor with an angiotensin II receptor antagonist or aliskiren is not recommended.

Before starting treatment with perindopril, renal function testing is recommended for all patients.

During treatment with perindopril, the kidney function, the activity of liver enzymes in the blood should be regularly monitored, peripheral blood tests should be carried out (especially in patients with diffuse connective tissue diseases, in patients who receive immunodepressants, allopurinol). Patients with deficiency of sodium and fluids need to correct water and electrolyte disorders before treatment.

The risk of developing hyperkalemia increases with simultaneous use of perindopril with otherdrugs that can cause hyperkalemia: aliskiren and aliskiren-containing drugs, potassium salts, potassium-sparing diuretics, ACE inhibitors, angiotensin II receptor antagonists, NSAIDs, Heparin, immunosuppressants such as cyclosporine or tacrolimus, trimethoprim.

With simultaneous use with aliskiren in patients with diabetes or impaired renal function (GFR <60 ml / min), the risk of hyperkalemia, deterioration of renal function and an increase in the incidence of cardiovascular morbidity and mortality (this combination is contraindicated in patients of these groups) increases.

Not recommended simultaneous use with aliskiren in patients who do not have diabetes or renal dysfunction, because possible increase in the risk of hyperkalemia, deterioration of kidney function and an increase in the incidence of cardiovascular morbidity and mortality.

In the literature, it has been reported that in patients with established atherosclerotic disease, heart failure or diabetes mellitus with target organ damage, concurrent therapy with an ACE inhibitor and angiotensin II receptor antagonist is associated with a higher incidence of hypotension, syncope, hyperkalemia and deterioration of kidney function (including acute renal failure) compared with the use of only one drug that affects the RAAS. Double blockade (for example, in combination with an ACE inhibitor with an angiotensin II receptor antagonist) should be limited to individual cases with careful monitoring of kidney function, potassium and blood pressure.

Simultaneous use with estramustine can lead to an increased risk of side effects, such as angioedema.

With simultaneous use of drugs lithium and perindopril may be a reversible increase in the concentration of lithium in the blood serum and the associated toxic effects (this combination is not recommended).

Simultaneous use with hypoglycemic drugs (insulin, hypoglycemic agents for oral administration) requires special care, since ACE inhibitors, incl. perindopril, can enhance the hypoglycemic effect of these drugs until the development of hypoglycemia. As a rule, this is observed in the first weeks of simultaneous therapy in patients with impaired renal function.

Baclofen enhances the antihypertensive effect of perindopril, while the application may require a dose adjustment of the latter.

In patients taking diuretics, especially those removing fluid and / or salt, at the beginning of perindopril therapy, an excessive decrease in blood pressure can be observed, the risk of which can be reduced by discontinuing the diuretic, replenishing the loss of fluid or salt before starting perindopril, and also using perindopril in low doses. the initial dose with a further gradual increase.

In chronic heart failure in the case of the use of diuretics, perindopril should be used in a low dose,perhaps after reducing the dose of a simultaneously used potassium-sparing diuretic. In all cases, renal function (creatinine concentration) should be monitored in the first weeks of use of ACE inhibitors.

The use of eplerenone or spironolactone in doses of 12.5 mg to 50 mg / day and ACE inhibitors (including perindopril) in low doses: in the treatment of heart failure II-IV functional class according to NYHA classification with left ventricular ejection fraction <40% and previously used ACE inhibitors and "loop" diuretics, there is a risk of developing hyperkalemia (possibly fatal), especially if the recommendations regarding this combination are not followed. Before using this combination, you must ensure that there is no hyperkalemia and renal dysfunction. It is recommended to regularly monitor the concentration of creatinine and potassium in the blood - weekly in the first month of treatment and monthly in the subsequent.

The simultaneous use of perindopril with NSAIDs (acetylsalicylic acid in a dose that has an anti-inflammatory effect, COX-2 inhibitors and non-selective NSAIDs) can lead to a decrease in the antihypertensive effect of ACE inhibitors. The simultaneous use of ACE inhibitors and NSAIDs can lead to a deterioration in renal function, including the development of acute renal failure, and an increase in serum potassium, especially in patients with reduced kidney function.Use this combination with care in elderly patients. Patients should receive an adequate amount of fluid; It is recommended to carefully monitor renal function, both at the beginning and during the treatment process.

Simultaneous use of gliptin (linagliptin, saxagliptin, sitagliptin, vitagliptin) with ACE inhibitors (including perindopril) may increase the risk of developing angioedema due to the suppression of dipeptidyl peptidase IV glyptin.

The simultaneous use of perindopril with tricyclic antidepressants, antipsychotics and general anesthesia drugs can lead to increased antihypertensive action.

Sympathomimetics can weaken the antihypertensive effect of perindopril.

When using ACE inhibitors, incl. perindopril, in patients receiving IV gold medication (sodium aurothiomalate), a symptom complex was described, in which there was a flushing of the skin of the face, nausea, vomiting, arterial hypotension.