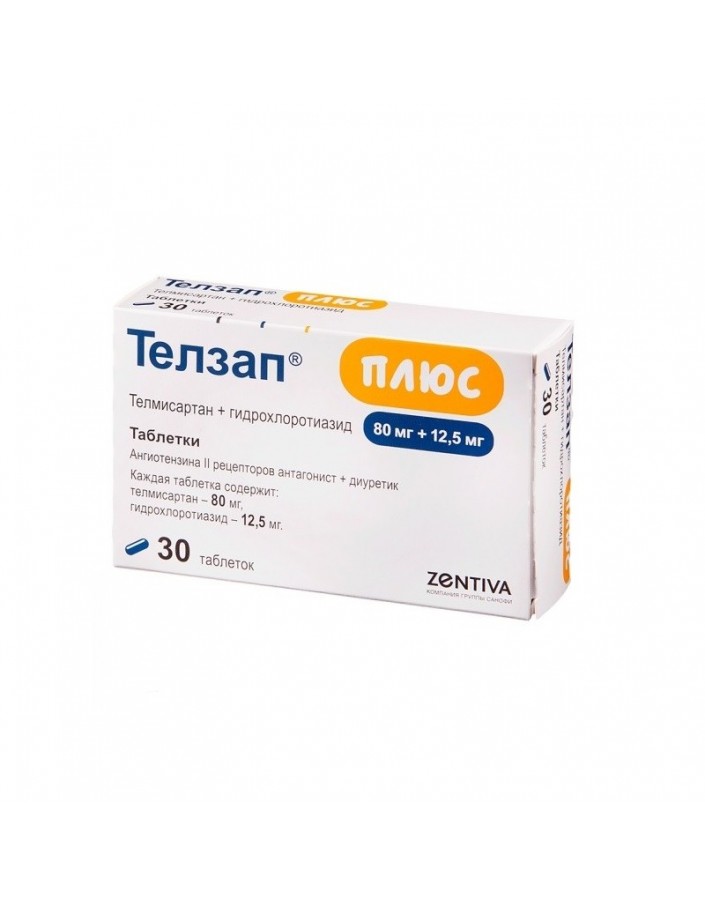 Telzap® Plus is a combination of telmisartan (angiotensin II receptor antagonist (APA II)) and hydrochlorothiazide (thiazide diuretic). The combination of these components provides a more pronounced antihypertensive effect, while the level of blood pressure decreases more than against the background of monotherapy with these components.

In healthy people, telmisartan at a dose of 80 mg almost completely blocks the hypertensive effect of angiotensin II. The overwhelming effect lasts more than 24 hours and lasts up to 48 hours.

The onset of the antihypertensive effect is observed within the first 3 hours after ingestion of telmisartan inside. The duration of the therapeutic effect of the drug is more than 24 hours and includes the last 4 hours before taking the next dose according to the daily monitoring of blood pressure. This is confirmed by measurements made at the time of maximum effect and immediately before taking the next dose (the ratio of the residual effect to the maximum above 80% for dosages of 40 and 80 mg of telmisartan in placebo-controlled studies). The maximum antihypertensive effect develops after 4-8 weeks of regular intake of telmisartan and persists during long-term therapy.

In patients with arterial hypertension, telmisartan reduces both systolic and diastolic pressure without affecting heart rate. According to the results of clinical studies, the effectiveness of the antihypertensive effect of telmisartan is comparable to the therapeutic effect of other classes of drugs, such as Amlodipine, Atenolol, Enalapril, hydrochlorothiazide, and lisinopril. In the case of abrupt cessation of treatment with telmisartan, the blood pressure gradually returns to baseline,without the development of "withdrawal" syndrome.

The incidence of dry cough was significantly lower during the use of telmisartan, in contrast to ACE inhibitors.

Hydrochlorothiazide is a thiazide diuretic. Thiazides affect the reabsorption of electrolytes in the renal tubules, thereby increasing the excretion of sodium ions and chlorides in approximately equivalent amounts. The diuretic effect of hydrochlorothiazide leads to a decrease in BCC, an increase in plasma renin activity, an increase in aldosterone production, followed by an increase in potassium and bicarbonate levels in the urine and a decrease in the potassium content in blood plasma. The simultaneous use of telmisartan helps to reduce the loss of potassium caused by this diuretic, probably due to the blockade of the RAAS. After taking hydrochlorothiazide diuresis increases after 2 hours, the maximum effect develops after about 4 hours, the effect lasts about 6-12 hours.

In epidemiological studies, it has been established that prolonged therapy with hydrochlorothiazide reduces the risk of cardiovascular morbidity and mortality.

Patients of childhood and adolescence

The safety and efficacy of telmisartan in children and adolescents under the age of 18 years has not been established.

In healthy people, the simultaneous use of hydrochlorothiazide and telmisartan does not affect the pharmacokinetics of each of the components of the drug.

After oral administration, Telmisartan is rapidly absorbed. WITHmax telmisartan after ingestion is achieved in 0.5-1.5 h. The absolute bioavailability when taking 40 and 160 mg is 42% and 58%, respectively. Meal slightly reduces the bioavailability of telmisartan, a decrease in the AUC value ranges from 6% (dose 40 mg) to 19% (dose 160 mg). After 3 hours after administration, the plasma concentration levels out regardless of whether the drug was taken with food or on an empty stomach. A slight decrease in AUC does not cause a decrease in the therapeutic efficacy of the drug.

The pharmacokinetics of telmisartan after oral administration is not linear. After repeated use, there was no significant accumulation of telmisartan in the blood plasma.

Telmisartan metabolism occurs by conjugation with glucuronic acid and the formation of a pharmacologically inactive metabolite acylglucuronide. After a single dose of telmisartan, labeled14C, acylglucuronide made up approximately 11% of the total amount of radioactive substance in the blood plasma. The cytochrome P450 isoenzymes do not participate in the metabolism of telmisartan.

After ingestion or in / in the introduction14C-tagged telmisartan most of the dose (> 97%) is excreted through the intestine with bile; a small amount of the substance is excreted by the kidneys (less than 2%).The total plasma clearance of telmisartan after oral administration is> 1500 ml / min. T1/2 telmisartan is more than 20 h.

Plasma concentration of telmisartan in women is 2-3 times higher than in men, while in women there is no increase in the antihypertensive effect. There is no need for dose adjustment.

The pharmacokinetics of telmisartan in elderly patients (over 70 years old) is not different from younger patients.

Excretion of telmisartan occurs with little or no kidney involvement (less than 2%). Given the experience of using the drug for the treatment of patients with mild to moderate renal insufficiency (CK 30-60 ml / min, on average - about 50 ml / min), there is no need for dose adjustment in patients with impaired renal function. Telmisartan is not displayed during hemodialysis.

Pharmacokinetic studies in patients with impaired liver function showed an increase in absolute bioavailability up to 100%. In patients with hepatic insufficiency T1/2 did not change.

After ingestion Cmax Hydrochlorothiazide in plasma is reached after approximately 1–3 hours. With cumulative renal excretion of hydrochlorothiazide, the absolute bioavailability is about 60%.

Hydrochlorothiazide is not metabolized in humans.

Women have a tendency to higher plasma concentrations of hydrochlorothiazide, this finding is not clinically significant.

In patients with renal insufficiency, the rate of elimination of hydrochlorothiazide is reduced. Patients with remote or single kidney T1/2 is about 34 h.

- arterial hypertension (in the absence of the effectiveness of monotherapy with telmisartan or hydrochlorothiazide).

The drug is taken orally 1 time / day, squeezed liquid, regardless of the meal.

Patients whose blood pressure cannot be adequately controlled with monotherapy with telmisartan or hydrochlorothiazide should be given Telzap® A plus. Before switching to a fixed dose combination, an individual dose titration of each component is recommended. In some clinical situations, a direct transition from monotherapy to treatment with a fixed-dose combination can be considered.

Drug Telzap® Plus, 80 mg + 12.5 mg, can be used 1 time / day in patients whose blood pressure can not be properly controlled while taking telmisartan in a dose of 80 mg / day.

Concomitant use of telmisartan with aliskiren is contraindicated in patients with renal insufficiency (GFR less than 60 ml / min / 1.73 m2).

Forelderly patients (over 70 years old) dose adjustment is not required.

Drug Telzap® Plus is contraindicated for use inchildren and adolescents under the age of 18 due to lack of safety and efficacy data.

Telzap Plus 80 mg + 12.5 mg: the overall incidence of adverse reactions was comparable to that on the background of telmisartan monotherapy. The dependence of the development of adverse reactions on the dose of the drug has not been established, there was no correlation with gender, age or race of patients.

On the part of the immune system: rarely, an increase in symptoms or an exacerbation of systemic lupus erythematosus (during post-registration observation).

From the organ of hearing: infrequently - vertigo.

On the part of the respiratory system: infrequently - shortness of breath; rarely, respiratory distress syndrome (including pneumonitis and pulmonary edema).

From the genital and breast organs: infrequently - erectile dysfunction.

The side effects noted when using one of the components, the development of which can be expected when using a combination of telmisartan and hydrochlorothiazide.

On the part of the immune system: rarely - hypersensitivity reactions, Anaphylactic reactions.

From the nervous system: rarely - drowsiness.