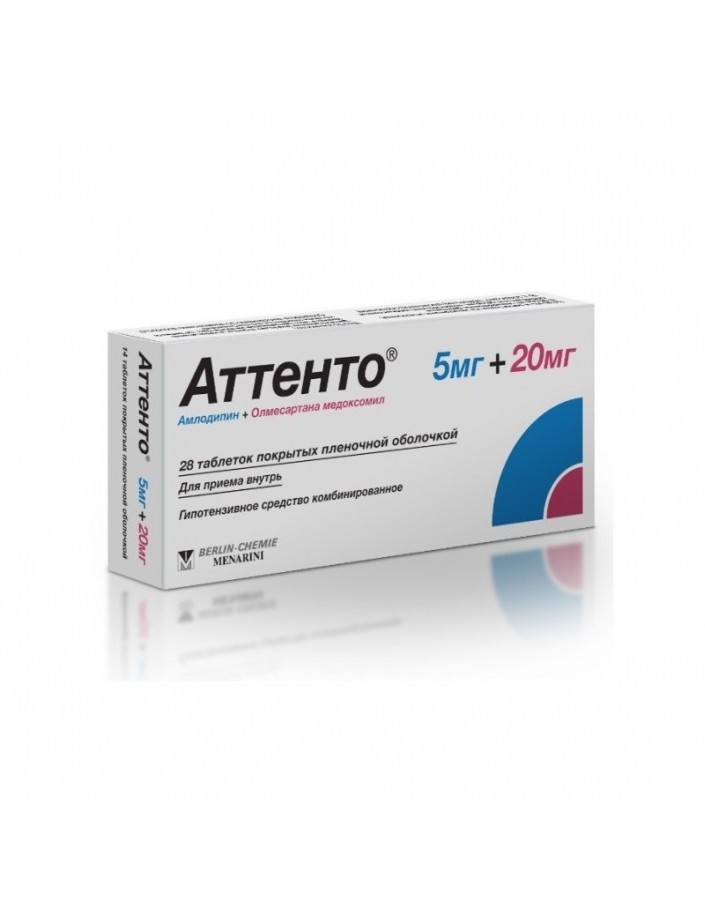 Amount in a package

The drug Attento® is a combined antihypertensive drug, which consists of angiotensin II receptor antagonist (ARA II) - olmesartan medoxomil and the slow Calcium channel blocker (BMCC) - amlodipine.The combination of the two active substances has a synergistic antihypertensive effect, as a result of which the arterial pressure (BP) decreases to a greater extent than when each one is taken separately.

In an 8-week double-blind, randomized, placebo-controlled study involving 1940 patients, it was shown that the antihypertensive effect of Attento® develops, as a rule, during the first 2 weeks of therapy. As was shown in three studies, when using the drug 1 time per day, the antihypertensive effect of Attento® is maintained for 24 hours, while the residual / peak ratio for systolic blood pressure (MAP) and diastolic blood pressure (DAD) ranged from 71% to 82%.. The antihypertensive effect was confirmed during outpatient monitoring of blood pressure and was not dependent on age and gender, as well as on the presence of diabetes in patients. In two open non-randomized extended studies, the sustained efficacy of Attento® at a dosage of 5 mg + 40 mg was shown for 49-67% of patients within one year of use.

Olmesartan medoxomil, which is a part of Attento®, is a powerful specific APA II (AT1 type). Angiotensin II is the primary vasoactive component of the renin-angiotensin-aldosterone system and plays a significant role in the pathophysiology of arterial hypertension by acting on AT1 receptors. Olmesartan, preventing the binding of angiotensin II to AT1 receptors in tissues (including vascular smooth muscle and adrenal glands), blocks its vasoconstrictor action, as well as the effects associated with the effect of angiotensin II on the secretion of aldosterone. The specific antagonism of olmesartan in relation to AT1 receptors leads to an increase in the activity of renin, angiotensin I and II in the blood plasma, and also contributes to a decrease in the plasma concentration of aldosterone.

Taking olmesartan medoxomil once a day provides an effective and mild decrease in blood pressure over 24 hours. Dividing the daily dose into two doses has an antihypertensive effect similar to that seen when taking the same daily dose at a time. The antihypertensive effect of olmesartan medoxomil occurs, as a rule, already after 2 weeks, and the maximum effect develops approximately 8 weeks after the start of therapy.

To date, data on the effect of olmesartan medoxomil on mortality and morbidity are not available.

In a randomized ROADMAP study involving 4447 patients with type 2 diabetes mellitus, normoalbuminuria and at least one additional cardiovascular risk factor, the ability of olmesartan to increase the time until microalbuminuria appeared. During the study period (median follow-up was 3.2 g), patients took olmesartan or placebo in addition to other antihypertensive drugs (with the exception of angiotensin-converting enzyme inhibitors (APF) or other ARA II). The study showed a 23% reduction in risk with respect to the primary endpoint (time before microalbuminuria appeared) in favor of olmesartan (ODF 0.770; 95.1% CI: 0.630-0.941; p = 0.0104).Cardiovascular complications (secondary endpoints) were reported in 96 patients (4.3%) in the olmesartan group and in 94 patients (4.2%) in the placebo group.

In a randomized ORIENT study conducted in Japan and China, the effect of olmesartan on renal and cardiovascular outcomes was studied in 577 patients with type 2 diabetes and severe nephropathy. During the study (median follow-up was 3.1 years), patients received olmesartan or placebo in addition to other antihypertensive drugs, including ACE inhibitors.

Amlodipine, which is a part of Attento®, is BMCA, blocking the incoming transmembrane current of calcium ions into cardiomyocytes and vascular smooth muscle cells through potential-dependent L-type channels. Experimental data suggest that amlodipine interacts with both the dihydropyridine and non-dihydropyridine binding sites. Amlodipine has a relative vasoselectivity and has a greater effect on vascular smooth muscle cells than on cardiomyocytes. The mechanism of antihypertensive action of amlodipine is associated with a direct relaxing effect on vascular smooth muscle, causing a decrease in peripheral vascular resistance and a decrease in blood pressure.

Amlodipine causes a dose-dependent, prolonged decrease in blood pressure in patients with arterial hypertension. There is no data on the development of arterial hypotension after taking the first dose of amlodipine, on tachyphylaxis during long-term treatment or on the "withdrawal" syndrome.

When used in therapeutic doses in patients with arterial hypertension, amlodipine causes dilation of blood vessels, leading to a decrease in blood pressure (in the patient's position "lying", "sitting" and "standing"). With prolonged use, a decrease in blood pressure is not accompanied by a significant change in heart rate (HR) and catecholamine concentration in plasma. In hypertension in patients with normal renal function, the use of amlodipine in therapeutic doses leads to a decrease in renal vascular resistance, an increase in glomerular filtration rate and an increase in effective renal blood flow without changing the filtration fraction and the level of proteinuria.

In a placebo-controlled study (PRAISE) with the participation of patients with heart failure (III-IV functional class according to the NYHA classification),treated with Digoxin , diuretics and ACE inhibitors, it has been shown that amlodipine does not increase the risk of complications and / or mortality (both from cardiovascular causes) in patients with heart failure.

In a long-term placebo-controlled study (PRAISE-II) involving patients with heart failure (NYHA Class III-IV functional class) without clinical symptoms or objective evidence of coronary heart disease, taking ACE inhibitors, digoxin and diuretics, that the use of amlodipine did not affect the overall mortality and mortality from cardiovascular causes.

In a double-blind, randomized study (ALLHAT), we compared the efficacy of amlodipine at a dose of 2.5–10 mg / day or lisinopril at a dose of 10–40 mg / day as the first choice therapy and the use of thiazide diuretic chlortalidone at a dose of 12.5 - 25 mg / day for mild to moderate hypertension. A total of 33,357 patients with hypertension aged 55 years and older were included in the study and were followed up for an average of 4.9 years. The combined primary endpoint included death in patients with ischemic heart disease or non-fatal myocardial infarction. There were no statistically significant differences in the effect on the primary endpoint of the study in the amlodipine and chlorthalidone groups.There was also no significant difference in all-cause mortality between these groups.

Cmax of olmesartan in plasma is, on average, achieved 2 hours after taking olmesartan medoxomil by mouth and increases approximately linearly with an increase in a single dose to 80 mg.

Olmesartan is characterized by a high degree of binding to plasma proteins (99.7%), however, the potential for a clinically significant shift in protein binding when olmesartan interacts with other highly binding and simultaneously used drugs is low (a confirmation of this is the absence of clinically significant interaction between olmesartan and warfarin). Communication olmesartan with blood cells is negligible. The average volume of distribution after intravenous administration is low (16–29 l).

There were no clinically significant differences in pharmacokinetic parameters of olmesartan depending on gender.

Absorption and distribution: after oral administration in therapeutic doses, amlodipine is well absorbed, the time to reach the maximum concentration (TCmax) is 6-12 hours after administration. Absolute bioavailability is about 64-80%. The volume of distribution is about 21 l / kg. In vitro plasma protein binding for circulating amlodipine is approximately 97.5%. A simultaneous meal does not have a significant effect on the absorption of amlodipine.

Metabolism and excretion: after a single dose of T1 / 2 from plasma in the terminal phase is about 35-50 hours. Amlodipine is largely metabolized in the liver to form inactive metabolites, 10% of the original substance and 60% of metabolites excreted by the kidneys.

Pharmacokinetics in patients aged 65 and over

In patients of elderly (65-75 years) and senile age (75 years and older) with arterial hypertension, the area under the concentration-time curve (AUC) (in equilibrium) for olmesartan is 35% more and approximately 44% more, compared with the AUC of olmesartan in younger patients, which may be partly due to the age-related decline in renal function.

The time to achieve Cmax amlodipine in plasma does not differ in elderly patients and in young patients. In elderly patients, there is a tendency to a decrease in the clearance of amlodipine, which leads to an increase in AUC and a prolongation of T1 / 2.

Pharmacokinetics in Patients with Renal Insufficiency

Compared with healthy volunteers, patients with mild, moderate, and severe severity of renal insufficiency have increased the AUC of olmesartan by approximately 62%, 82%, and 179%, respectively.

Renal failure has no significant effect on the pharmacokinetics of amlodipine. Changes in the concentration of amlodipine in the blood plasma do not correlate with the degree of renal dysfunction. Amlodipine is not excreted during dialysis.

Pharmacokinetics in Patients with Hepatic Insufficiency

After a single oral administration, the AUC values ​​of olmesartan were 6% and 65% higher in patients with mild to moderate hepatic insufficiency, respectively, compared with healthy volunteers. The unbound fraction of olmesartan 2 hours after ingestion of a single dose of the drug in healthy volunteers, in patients with mild and moderate hepatic insufficiency was 0.26