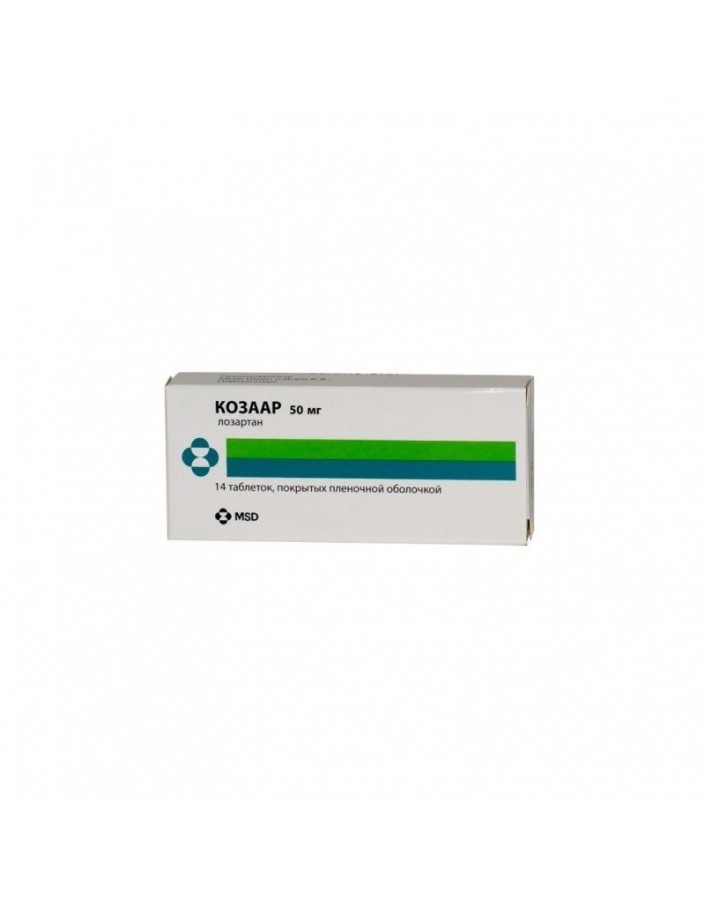 White coated tablets, oval, engraved with "952" on one side and notched - on the other contain: Losartan potassium 50 mg in 1 tablet

Cozaar is a specific angiotensin II receptor antagonist (AT1 type) for oral administration. Angiotensin II binds selectively to AT1 receptors found in many tissues (in smooth muscle tissue of the vessels, in the adrenal glands, kidneys, and heart) and performs several important biological functions, including vasoconstriction and the release of aldosterone. Angiotensin II also stimulates the growth of smooth muscle cells. Losartan and its pharmacologically active metabolite (Е 3174), both in vitro and in vivo, block all physiological effects of angiotensin II, regardless of the source or route of synthesis. Unlike some angiotensin II peptide antagonists, losartan does not have agonist effects.

Losartan binds selectively to AT1 receptors and does not bind or block the receptors of other hormones and ion channels, which play an important role in regulating the function of the cardiovascular system. In addition, losartan does not inhibit ACE, which contributes to the degradation of bradykinin. Therefore, effects that are not directly related to the blockade of AT1 receptors, in particular, increased effects associated with the effects of bradykinin or the development of edema (losartan - 1.7%, placebo - 1.9%), are not related to the action of losartan.

With long-term (6-week) treatment of patients with arterial hypertension with losartan at a dose of 100 mg / day, a 2-3-fold increase in the level of angiotensin II was observed at the time of reaching Cmax of the drug in blood plasma; some patients showed an even greater increase in the concentration of losartan, especially with a short duration of treatment (2 weeks). However, antihypertensive activity and a decrease in plasma aldosterone concentration were manifested after 2 and 6 weeks of therapy, which indicates an effective blockade of angiotensin II receptors. After the abolition of losartan, plasma renin activity and the level of angiotensin II after 3 days decreased to baseline values ​​observed before the start of the drug.

The concentrations of losartan and its active metabolite in the blood plasma, as well as the antihypertensive effect of losartan increase with increasing dose of the drug. Since Losartan and its active metabolite are antagonists of angiotensin II receptors, they both cause an antihypertensive effect. In the study with a single dose of 100 mg of losartan by healthy volunteers (men), the use of the drug by both patients on a diet with a limited content of table salt and patients consuming a lot of table salt did not affect the glomerular filtration rate, effective renal plasma flow and filtration fraction. Losartan has a natriuretic effect, which was more pronounced on a low-salt diet and, apparently, was not associated with the suppression of early sodium reabsorption in the proximal renal tubules. Losartan also caused a transient increase in uric acid excretion by the kidneys.

In patients with arterial hypertension, proteinuria (more than 2 g / 24 h), not suffering from diabetes and taking losartan for 8 weeks at a dose of 50 mg to 100 mg, there was a significant decrease in proteinuria by 42%, fractional excretion of albumin and IgG. In these patients, losartan stabilized the glomerular filtration rate and reduced the filtration fraction.

In postmenopausal women with arterial hypertension, who took potassium losartan at a dose of 50 mg / day for 4 weeks, there was no effect of therapy on the renal and systemic prostaglandins.

Losartan does not affect vegetative reflexes and does not have a lasting effect on the level of norepinephrine in the blood plasma.

In patients with arterial hypertension, losartan in doses up to 150 mg / day does not cause clinically significant changes in fasting triglycerides, total cholesterol and cholesterol - HDL. In the same doses, losartan does not affect the fasting blood glucose concentration.

In general, losartan caused a decrease in the serum concentration of uric acid (usually less than 0.4 mg / dL), which was maintained during long-term therapy. In controlled clinical trials in which patients with arterial hypertension were included, no cases of drug withdrawal due to an increase in serum creatinine or potassium levels were registered.

- Arterial hypertension.
- Reducing the risk of cardiovascular diseases and mortality in patients with arterial hypertension and left ventricular hypertrophy.
- Protection of kidney function in patients with diabetes mellitus type 2 with proteinuria to reduce the likelihood of increasing creatinine levels, stabilizing kidney disease (preventing the need for dialysis or renal transplantation), reducing proteinuria.
- Chronic heart failure with the failure of treatment with ACE inhibitors.

- Pregnancy.
- Hypersensitivity to the drug.

The use of Cozaar during pregnancy is contraindicated.

When used in the II and III trimesters of pregnancy, drugs acting on the renin-angiotensin system can cause damage or even death to the developing fetus, therefore, when establishing pregnancy, Cozaar should be stopped immediately. In the fetus, renal perfusion, depending on the development of the renin-angiotensin system, appears in the second trimester; the risk to the fetus increases if Cozaar is prescribed in the second or third trimester of pregnancy.

Do not take Cozaar during lactation. Experience of losartan use during breastfeeding is not, and it is not known whether losartan is excreted in breast milk. Since many drugs are excreted in breast milk and may have an adverse effect on infants, taking into account the need for a mother's drug, a decision should be made to discontinue breastfeeding or to discontinue the drug.

Cozaar is taken orally, regardless of the meal, it can be used both as monotherapy and in combination with other antihypertensive drugs.

- Appointment in patients with type 2 diabetes mellitus and proteinuria: To protect kidney function in patients with type 2 diabetes and proteinuria, the standard initial dose of the drug is 50 mg 1 time / day.In the future, it is recommended to increase the dose of Cozaar to 100 mg 1 time / day, taking into account the degree of decrease in blood pressure. Cozaar can be prescribed together with other antihypertensive agents (diuretics, Calcium channel blockers, alpha and beta blockers, centrally acting drugs), insulin and other hypoglycemic agents (sulfonylurea derivatives, glitazones and glucosidase inhibitors).

In controlled clinical trials of the drug in patients with essential arterial hypertension, the only side effect associated with taking the drug was dizziness, which was observed more often than when prescribing a placebo and occurred in more than 1% of patients receiving Cozaar. In addition, less than 1% of patients had orthostatic reactions depending on the dose of the drug. Rarely reported on the occurrence of rash, but the frequency of its occurrence was less than when receiving a placebo.

Controlled clinical studies have shown that Cozaar is generally well tolerated by patients with left ventricular hypertrophy, patients with type 2 diabetes and proteinuria.The most frequent side effects associated with taking the drug were systemic and non-systemic vertigo, asthenia / weakness, decreased blood pressure, and hyperkalemia.

In the course of these studies, the following side effects in patients receiving Cozaar (n = 2085) and placebo (n = 535) occurred in more than 1% of patients:

- The following adverse reactions were noted in broad clinical practice.
- Allergic reactions
- Patients treated with losartan rarely experienced angioedema, including laryngeal swelling, glottis, causing airway obstruction, and / or swelling of the face, lips, pharynx, and / or tongue. Some of these patients had indications of a history of angioedema in the history of ACE inhibitors. The occurrence of vasculitis has been rarely reported, including Schoenlein-Henoch purpura.

- From the hemopoietic system
- Anemia.
- Thrombocytopenia.

- From the musculoskeletal system
- Mialgia.
- Arthralgia.

- From the side of the central nervous system
- Migraine.

- On the part of the respiratory system
- Cough.

- On the laboratory side: When conducting controlled clinical trials in patients with essential arterial hypertension, clinically significant changes in standard laboratory parameters were rarely associated with taking Cozaar. Hyperkalemia was noted in 1.5% of patients (serum potassium was more than 5.5 meq / l). In a study on patients with type 2 diabetes mellitus with proteinuria, hyperkalemia developed in 9.9% of patients treated with Cozaar and in 3.4% of patients treated with placebo. An increased level of ALT was observed in rare cases and usually returned to normal after discontinuation of therapy.

In general, Cozaar is well tolerated, side effects are mild and transient, and do not require discontinuation of the drug. The cumulative incidence of cozar side effects is comparable to that given with placebo.

Use for impaired renal function: Due to inhibition of the renin-angiotensin system in some susceptible patients, changes in renal function, including renal failure, have been noted; these changes may disappear after cessation of therapy.

Perhaps the manifestation of this symptom of hypersensitivity as angioedema.In patients with reduced BCC (for example, receiving treatment with large doses of diuretics), symptomatic arterial hypotension may occur. Correction of such conditions should be carried out before the appointment of Cozaar or start treatment with a lower dose. Disruption of water and electrolyte balance is characteristic of patients with renal insufficiency with or without diabetes mellitus, therefore, in the appointment of the drug in this category of patients should be especially careful. In clinical trials involving patients with type 2 diabetes mellitus with proteinuria, the number of cases of hyperkalemia was higher in the Cozaar group than in the placebo group. Several patients had to discontinue therapy due to hyperkalemia. These pharmacokinetic studies indicate that the concentration of losartan in the blood plasma of patients with cirrhosis of the liver increases significantly, so patients with a history of liver disease should be prescribed a lower dose of the drug. As a result of inhibition of the renin-angiotensin system, some susceptible patients have had changes in renal function, including renal failure; these changes may disappear after cessation of therapy. Some drugs that affect the renin-angiotensin system may increase the level of blood urea and serum creatinine in patients with bilateral renal artery stenosis or arterial stenosis of a single kidney.Reported the occurrence of similar effects when taking Cozaar; changes in renal function may disappear when therapy is stopped.

- Use in Pediatrics. Safety and efficacy of the drug in children have not been established.

No clinically significant interaction was noted.

Overdose information is limited.The most likely symptoms of overdose: marked reduction in blood pressure and tachycardia; bradycardia may occur due to parasympathetic stimulation.

Treatment Symptomatic therapy. Losartan and its active metabolite are not removed from the bloodstream during hemodialysis.

The preparation should be stored in tightly closed packaging, protected from light, out of reach of children at a temperature not exceeding 30 ° C.