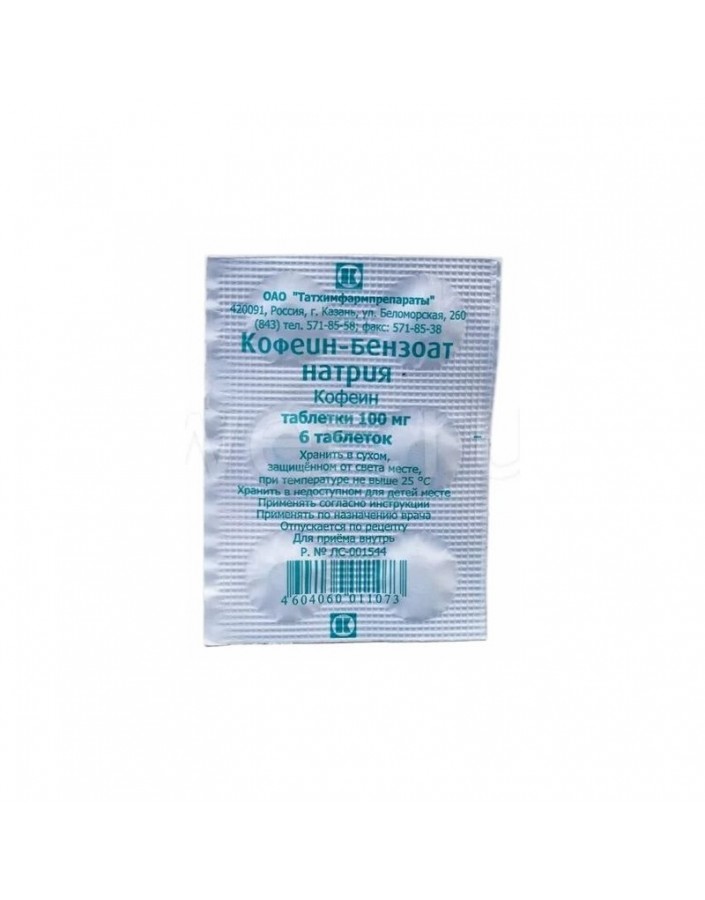 Psychogogic and analeptic, a derivative of methylxanthine. Competitively blocks the central and peripheral A1 and A2 adenosine receptors. Inhibits PDE activity in the central nervous system, heart, smooth muscle organs, skeletal muscles, adipose tissue, promotes the accumulation of cAMP and cGMP in them (this effect is observed when used only in high doses). Stimulates the centers of the medulla oblongata (respiratory and vasomotor), as well as the center of n.vagus, and has a direct stimulating effect on the cerebral cortex. In high doses, it facilitates interneuronal conduction in the spinal cord, enhancing spinal reflexes.

Increases mental and physical performance, stimulates mental activity, motor activity, shortens the reaction time, temporarily reduces fatigue and drowsiness. In small doses, the effect of stimulation prevails, and in large doses - the effect of suppression of the nervous system.

Increases and deepens breathing. Usually it has a positive in-, chrono, batmo-and dromotropic effect (since the effect on the CVS is the direct stimulating effect on the myocardium and the simultaneous exciting effect on the n.vagus centers, the resulting effect depends on the prevalence of one or another action).Stimulates the vasomotor center and has a direct relaxing effect on the vascular wall, which leads to the expansion of heart vessels, skeletal muscles and kidneys, while the tone of cerebral arteries increases (causes narrowing of the brain vessels, which is accompanied by a decrease in brain blood flow and oxygen pressure in the brain).

Blood pressure changes under the action of vascular and cardiac mechanisms of caffeine influence: at normal baseline blood pressure, caffeine does not change or slightly increase it, and during arterial hypotension it normalizes.

It has an antispasmodic effect on smooth muscles (including bronchodilating effect), on striated muscle - stimulating.

Increases the secretory activity of the stomach.

It has a moderate diuretic effect due to a decrease in the reabsorption of sodium and water ions in the proximal and distal renal tubules, as well as dilation of the renal vessels and an increase in filtration in the renal glomeruli.

Reduces platelet aggregation and the release of histamine from mast cells.

Diseases accompanied by inhibition of the central nervous system, functions of the cardiovascular and respiratory systems (including poisoning with opioid analgesics, infectious diseases), spasms of cerebral vessels, reduced mental and physical performance, drowsiness.

From the side of the central nervous system: sleep disturbance, agitation, anxiety; with prolonged use may addictive.

May be used in the form of mono-or in combination therapy.

With simultaneous use decreases the effect of hypnotic drugs and anesthesia.

With simultaneous use may enhance the action of analgesics, antipyretic, salicylamide, Naproxen.

With the simultaneous use of estrogens (hormonal contraceptives, drugs for hormone replacement therapy), it is possible to increase the intensity and duration of caffeine by inhibiting the isoenzyme CYP1A2 by estrogens.

With the simultaneous use of adenosine, caffeine reduces increased heart rate and changes in blood pressure caused by infusion of adenosine; reduces vasodilation due to the action of adenosine.

With simultaneous use may increase bioavailability, absorption rate and plasma concentration of Acetylsalicylic acid.

With simultaneous use of meksiletin reduces caffeine clearance and increases its concentration in plasma, apparently, due to inhibition of caffeine metabolism in the liver by meksiletin.

Metoksalen reduces the excretion of caffeine from the body with a possible increase in its effect and the development of toxic action.

Due to the induction of microsomal liver enzymes under the influence of phenytoin, with its simultaneous use, there is an acceleration of metabolism and elimination of caffeine.

The most pronounced increase in AUC and decrease in clearance are observed with simultaneous use of caffeine with enoxacin, Ciprofloxacin, pipemidovoy acid; less pronounced changes - with pefloxacin, norfloxacin, fleroxacin.

With simultaneous use of caffeine accelerates the absorption of ergotamine.