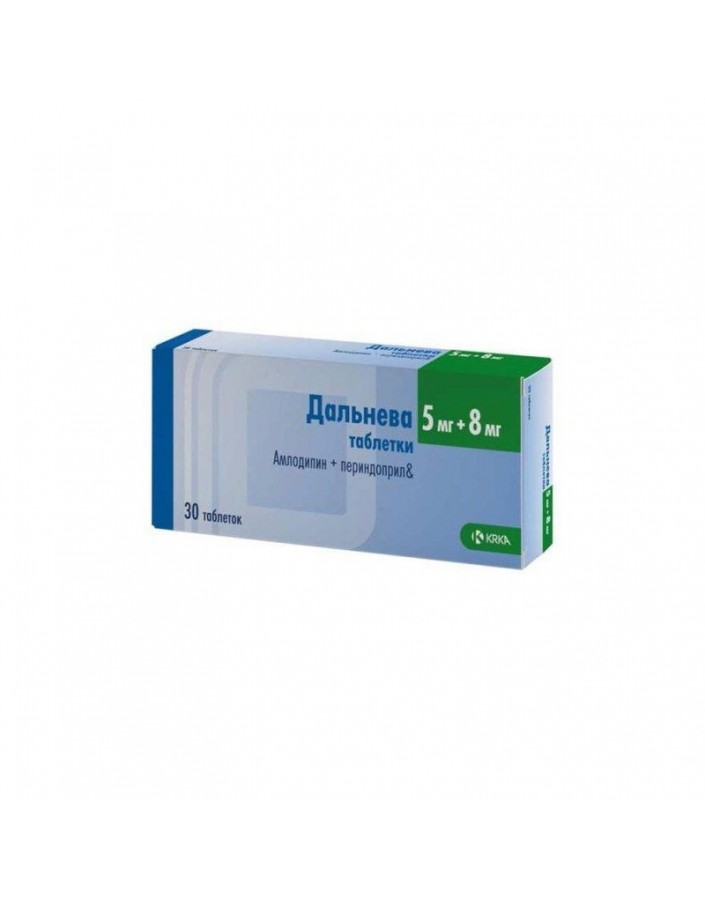 Combined antihypertensive drug.
Amlodipine. A derivative of dihydropyridine - a blocker of slow Calcium channels, has antianginal and hypotensive effects. It blocks calcium channels, reduces the transmembrane transition of calcium ions into the cell (to a greater extent in vascular smooth muscle cells than in cardiomyocytes). The antianginal effect is due to the expansion of coronary and peripheral arteries and arterioles: in angina pectoris reduces the severity of myocardial ischemia; expanding peripheral arterioles reduces General peripheral vascular resistance (OPS) - vascular resistance to blood flow, resulting from blood viscosity, friction against the walls of blood vessels and vortex movements. OPSS is mainly determined by the degree of narrowing of resistive vessels, which include arterioles and venules located in the pre- and postcapillary regions of the vascular bed., reduces the afterload of the myocardium, reduces the myocardial oxygen demand, expanding the coronary arteries and arterioles in the unchanged and ischemic areas of the myocardium, increases the flow of oxygen into the myocardium (especially with vasospastic angina); prevents spasm of the coronary arteries (including caused by smoking).In patients with stable angina, a single daily dose increases exercise tolerance, increases the time before the onset of an attack of angina pectoris and "ischemic" depression of the ST segment on an ECG, reduces the frequency of attacks of stenocardia and the consumption of Nitroglycerin and other nitrates. It has a long dose-dependent hypotensive effect. The hypotensive effect is due to the direct vasodilating effect on vascular smooth muscle. In case of arterial hypertension, a single dose provides a clinically significant reduction in blood pressure for 24 hours (in the patient's position "lying" and "standing"). Orthostatic hypotension is one of the most frequent manifestations of dysfunction of the cardiovascular system in autonomic failure, manifested by a decrease in blood pressure (when going from a horizontal position to a vertical or prolonged standing), dizziness, blurred vision, headache or heaviness in the cervical-occipital region, fatigue, pre-unconscious (lipotic) condition, fainting, angina attacks (in patients with coronary artery stenosis). O.'s diagnostics is carried out on the basis of clinical signs, orthostatic test, differential diagnosis of the underlying disease. Treatment is symptomatic, in addition to treatment of the underlying disease. See the article Vegetative insufficiency for details. with the appointment of amlodipine is quite rare. It does not cause a decrease in the left ventricular ejection fraction.
Reduces the degree of hypertrophy of the left ventricular myocardium. Does not affect the contractility and conductivity of the myocardium, does not cause a reflex increase Heart rate (HR) is the number of contractions of the heart muscle (myocardium) per unit of time (1 minute). The pulsation of the arteries occurs synchronously with the heartbeats, which allows to measure the heart rate when determining the pulse (for example, on the wrist)., inhibits platelet aggregation, increases GFR, has a weak natriuretic effect. In diabetic nephropathy does not increase the severity of microalbuminuria. It does not have any adverse effect on the metabolism and plasma lipid concentration and can be used in the treatment of patients with bronchial asthma, diabetes mellitus and gout. A significant decrease in blood pressure is observed after 6-10 hours, the duration of the effect is 24 hours.

Perindopril. Perindopril - an ACE inhibitor. ACE or kininase II is an exopeptidase that converts angiotensin I into a vasoconstrictor, angiotensin II, and also ACE destroys bradykinin, which has a vasodilator, to an inactive hectapeptide. Suppression of the activity of ACE leads to a decrease in angiotensin II, an increase in the activity of renin in the blood plasma and a decrease in the secretion of aldosterone. Since ACE also destroys bradykinin, ACE suppression also leads to an increase in the activity of the kallikrein-kinin system.
Perindopril acts through its active metabolite, perindoprilat.Other metabolites have no inhibitory effect on ACE in vitro. Perindopril has a therapeutic effect for any degree of arterial hypertension, reducing systolic and diastolic blood pressure in the "lying" and "standing" positions.
Decreases Total Peripheral Vascular Resistance (OPS) - resistance of blood vessels to blood flow, resulting from blood viscosity, friction against the walls of blood vessels and vortex movements. OPSS is mainly determined by the degree of narrowing of resistive vessels, which include arterioles and venules located in the pre- and postcapillary regions of the vascular bed., as a result of which the peripheral blood flow increases unchanged. Heart rate (HR) is the number of contractions of the heart muscle (myocardium) per unit of time (1 minute). The pulsation of the arteries occurs synchronously with the heartbeats, which allows to measure the heart rate when determining the pulse (for example, on the wrist)..
The kidney blood flow usually increases, while the SCF does not change.
The antihypertensive effect reaches its maximum 4-6 h after a single dose of perindopril inside and persists for 24 hours. The hypotensive effect 24 hours after a single dose of oral administration is about 87-100% of the maximum hypotensive effect. The decrease in blood pressure develops quickly. The therapeutic effect occurs less than 1 month from the start of therapy and is not accompanied by tachycardia. The cessation of therapy does not lead to the development of withdrawal syndrome.and also reduces left ventricular hypertrophy.

Use during pregnancy and lactation
The use of the drug Dalnev contraindicated in pregnancy.
The drug Dalneva should not be used in the first trimester of pregnancy. When planning a pregnancy or when it occurs on the background of the use of the drug, it is necessary to stop taking it as soon as possible and to prescribe another antihypertensive therapy allowed for use during pregnancy. Appropriate controlled studies of the use of ACE inhibitors in pregnant women have not been conducted. The limited data available on the effects of the drug on the fetus in the first trimester of pregnancy indicate that the use of ACE inhibitors does not lead to fetal malformations, but an increase in risk cannot be excluded. It is known that the effect of ACE inhibitors on the fetus in the second and third trimesters of pregnancy can lead to impaired development (reduced kidney function, oligohydramnios, slowing down the ossification of the skull bones) and the development of complications in the newborn (renal failure, arterial hypotension, hyperkalemia). If the patient received ACE inhibitors in the II or III trimester of pregnancy, it is recommended to conduct an ultrasound examination to assess the state of the bones of the skull and the kidney function of the fetus.
Newborns whose mothers received ACE inhibitors during pregnancy should be under close medical supervision because of the risk of arterial hypotension, oliguria and hyperkalemia.
It is not recommended to use the drug Dalnev during lactation, because there is no relevant clinical experience with the use of amlodipine and perindopril both in monotherapy and in combination therapy. If necessary, the use of the drug Dalneva during lactation breastfeeding should be stopped.

Use in special clinical situations
The drug Dalnev can be prescribed to patients with CC more than 60 ml / min. The drug Far is contraindicated for use in patients with QA less than 60 ml / min. Such patients are recommended individual selection of doses of perindopril and amlodipine. Changes in the concentration of amlodipine in the blood plasma do not correlate with the severity of renal failure.

Care must be taken
When using the drug Dalnev in patients with liver failure, because there are no recommendations for the doses of the drug in these patients.

When using the drug Dalnev in elderly patients, dose adjustment is not required.

Dalnev's drug should not be prescribed to children and adolescents under 18 years, because there are no data on the efficacy and safety of perindopril and amlodipine in these groups of patients both in monotherapy and as part of combination therapy.