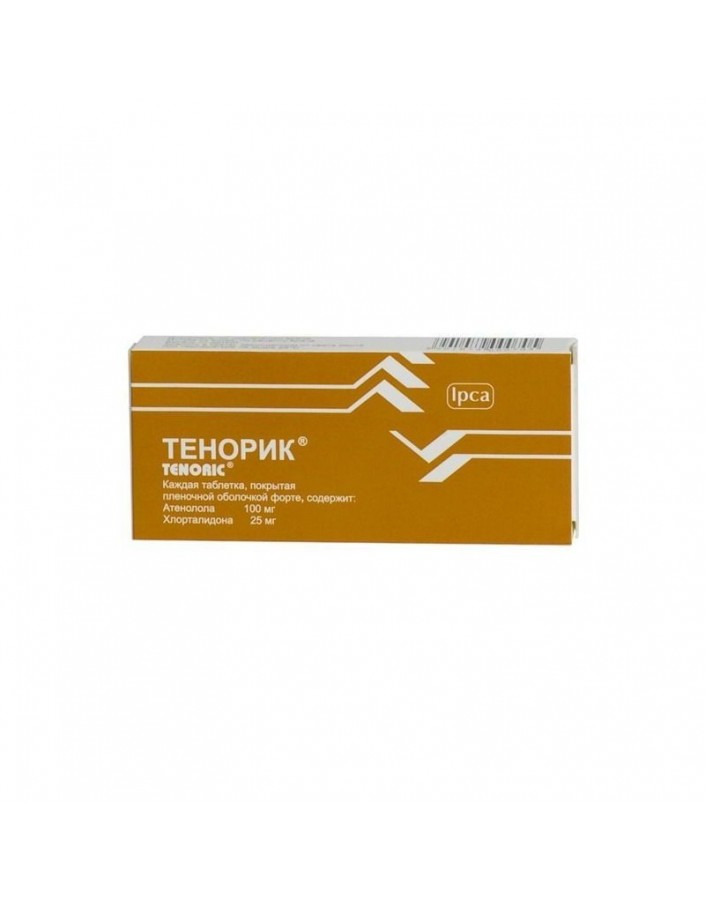 The drug Tenoric is usually well tolerated. Side effects are rare, mild and transient in nature.

On the part of the blood system: Leukopenia, purpura, thrombocytopenia, agranulocytosis, eosinophilia.

On the part of the respiratory system: Bronchospasm (in patients with bronchial asthma or with a history of bronchospasm).

On the part of laboratory parameters: Hyperuricemia, hyponatremia (associated with taking chlorthalidone), hypokalemia.

Others: Increase in the number of anti-nuclear antibodies (the clinical significance is unclear), decrease in potency, impaired glucose tolerance.

Conditioned by beta-adrenergic blocker Atenolol, which is part of the drug Tenoric: With caution prescribed to patients with AV-blockade I degree. It should be borne in mind that the use of the drug may mask the effects of thyrotoxicosis and hypoglycemia. When developing against the background of the use of the drug bradycardia (heart rate up to 50 beats / min) with clinical symptoms, reduce the dose or discontinue the drug. Do not abruptly cancel Tenoric in patients with coronary artery disease. Smokers may experience a decrease in the therapeutic effect of the drug. Special attention should be paid in cases where surgery is required with general anesthesia. The drug should be discontinued 48 hours before surgery, and as an anesthetic one should choose a drug with the least possible negative inotropic effect. While taking the drug, it is possible to increase the sensitivity to allergens and the development of severe Anaphylactic reactions, in connection with which patients receiving desensitization therapy,should take the drug with great care. Such patients may not respond to the average dose of epinephrine (adrenaline) used to treat allergic reactions. Caution should be given to patients with broncho-obstructive syndrome, and in case of worsening bronchial conduction, therapy with beta-adrenomimetics. With the use of atenolol, it is possible to reduce the production of tear fluid, which is important for patients using contact lenses.

Use for violations of the liver: The drug is contraindicated in acute hepatitis.

Application for violations of renal function: When prescribing the drug to patients with impaired renal function, reduce the frequency of taking the drug. Contraindicated in acute renal failure.

Use in pediatrics: The efficacy and safety of using Tenorica in children and adolescents under 18 years of age have not been established, therefore, the drug should not be administered to patients in this age group.

Simultaneous use of tenoric with dihydropyridine derivatives (nifedipine) may increase the risk of arterial hypotension, and patients with latent heart failure may experience signs of circulatory disorders.

It is necessary to carefully appoint a beta-blocker in combination with class I antiarrhythmic agents (disopyramide), since cardiodepressive effect can be added up.

The concomitant use of sympathomimetic drugs, such as epinephrine (adrenaline), norepinephrine (norepinephrine), can neutralize the effect of beta-blockers and lead to a significant increase in blood pressure.

Salicylates and NSAIDs (ibuprofen, indomethacin), estrogens can reduce the hypotensive effect of beta-blockers, and the use of salicylates in a high dose may increase the toxic effect of salicylates on the central nervous system.

Preparations containing lithium should not be used with diuretics, since they can reduce the renal clearance of lithium.

In the application of the drug Tenoric with MAO inhibitors may increase blood pressure (this combination should be avoided).

With simultaneous use of the drug Tenoric with ACE inhibitors (captopril, enalapril) at the beginning of therapy, a sharp increase in the antihypertensive effect is possible.

When combined with tenoric corticosteroids, amphotericin B, Furosemide may increase the excretion of potassium.

When combined with Tenoric, the effect of insulin and oral hypoglycemic agents may decrease (the level of glucose in the blood should be monitored).

The use of beta-blockers in combination with Calcium channel blockers that have a negative inotropic effect, such as Verapamil, diltiazem, can lead to an increase in this effect, especially in patients with reduced myocardial contractility and / or with impaired sinoatrial or AV conduction, which can become the cause of severe arterial hypotension, severe bradycardia and heart failure (calcium channel blocker should not be used in / for 48 hours after withdrawal of the beta-adrenergic block ora).

With the simultaneous appointment of Tenoric with reserpine, clonidine, guanfacine, the occurrence of severe bradycardia may occur.

Symptoms: severe bradycardia, hypotension, acute heart failure, bronchospasm, convulsions, increased drowsiness.
Treatment: careful monitoring of the patient's condition, if necessary - hospitalization in an ICU, gastric lavage, the use of Activated carbon and laxatives; in case of arterial hypotension and shock, administration of plasma or plasma substitutes; with brochospasm - the use of bronchodilators, with significant diuresis - the introduction of fluid and electrolytes. Hemodialysis or hemoperfusion is possible.

The drug should be stored in a dry, cool, dark place at temperatures not above 25 ° C.