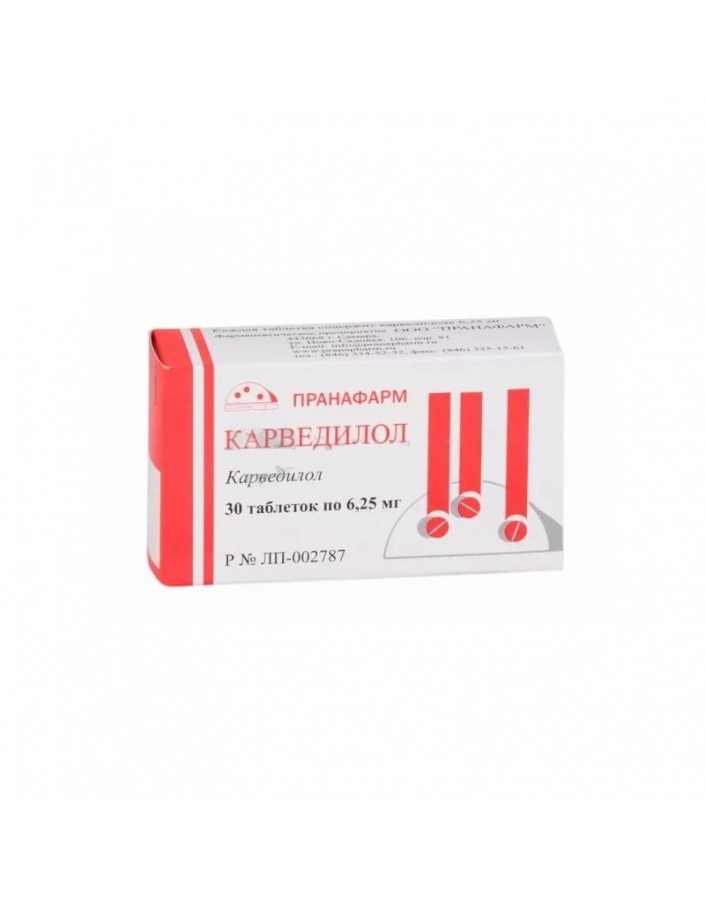 Description:
Tablets are round, flat-cylindrical, with a facet and face, white or almost white. Minor marbling is allowed.

Carefully:
With caution, the drug is used for aggravated allergic history, chronic obstructive pulmonary disease (COPD), depression, myasthenia,hypoglycemia, atrioventricular block I degree, thyrotoxicosis, with extensive surgical interventions and general anesthesia, Prinzmetal angina pectoris, diabetes mellitus, occlusive peripheral vascular diseases, suspected pheochromocytoma, renal failure, psoriasis.
Use during pregnancy and during breastfeeding
Beta-blockers reduce placental blood flow, which can lead to fetal death and premature birth. In addition, unwanted reactions may occur in the fetus and newborn, in particular, hypoglycemia and bradycardia, complications of the heart and lungs. Animal studies have not revealed a teratogenic effect in carvedilol.
There is not enough experience with carvedilol in pregnant women. Carvedilol Canon is contraindicated during pregnancy, unless it is absolutely necessary, if the potential benefit to the mother outweighs the risk to the fetus.
Carvedilol and its metabolites penetrate into breast milk, therefore, if taking the drug is necessary during lactation, breastfeeding should be stopped.

Overdose:
Symptoms: a marked decrease in blood pressure, bradycardia, heart failure, cardiogenic shock, cardiac arrest; respiratory disorders, bronchospasm, vomiting, confusion, and generalized convulsions are possible.
Treatment: in addition to general measures, it is necessary to monitor and correct vital signs, if necessary in the intensive care unit. You can use the following activities:

If a marked reduction in blood pressure dominates the clinical picture of overdose, norepinephrine (norepinephrine) is administered; it is prescribed under conditions of continuous monitoring of blood circulation parameters. In case of treatment-resistant bradycardia, the use of an artificial pacemaker is indicated. In case of bronchospasm, beta-adrenomimetics are administered in the form of an aerosol (with intravenous inefficiency) or aminophylline intravenously. For convulsions, diazepam or clonazepam is slowly injected intravenously. Since severe overdose with symptomatic shock may prolong the half-life of carvedilol and remove the drug from the depot, it is necessary to continue maintenance therapy for a long time. The duration of maintenance / detoxification therapy depends on the severity of the overdose, it should be continued until the patient’s clinical condition stabilizes.