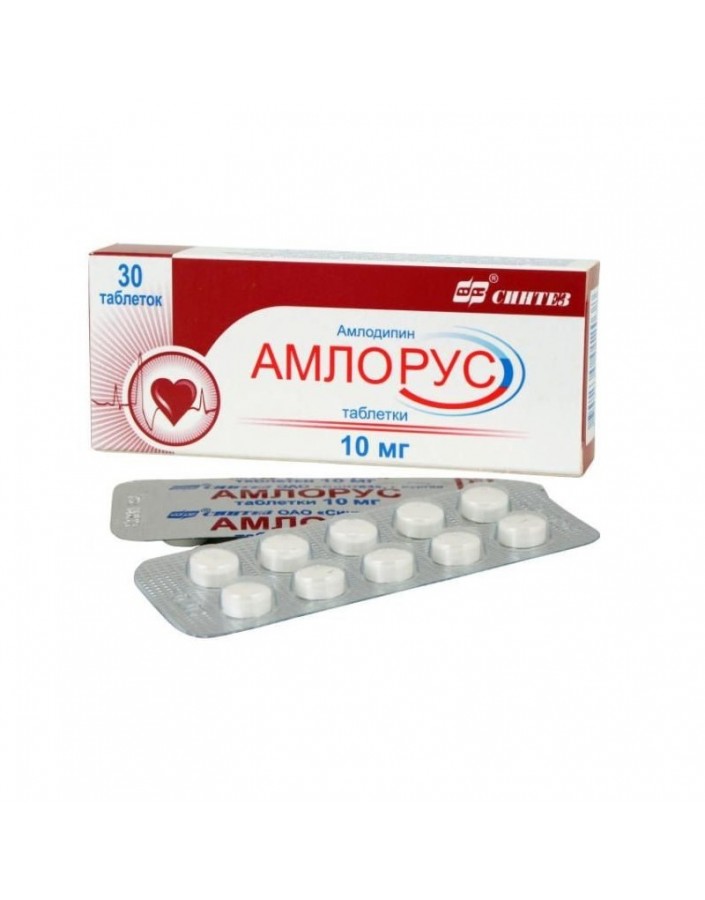 The dihydropyridine derivative is a blocker of "slow" calcium channels, has antihypertensive and antianginal effects. Blocks calcium channels, reduces the transmembrane transition of calcium ions into the cell (to a greater extent in vascular smooth muscle cells than in cardiomyocytes). The antihypertensive effect is due to the direct vasodilating effect on vascular smooth muscle. It has a long dose-dependent antihypertensive effect. Amlodipine reduces myocardial ischemia (has antianginal effect) in two ways: 1) expands the peripheral arterioles and thus reduces the total peripheral vascular resistance, reduces the afterload on the heart, while the heart rate remains almost unchanged,which leads to a decrease in energy consumption and myocardial oxygen demand; 2) expands the coronary and peripheral arteries and arterioles in unchanged and ischemic areas of the myocardium, which increases the oxygen supply to the myocardium (especially for vasospastic angina), reduces the severity of myocardial ischemia and prevents the development of a spasm of the coronary arteries (including caused by smoking). In hypertension, a single dose provides a clinically significant reduction in blood pressure for 24 hours (in the position of the patient "lying" and "standing"). Due to the slow onset of action, amlodipine does not cause a sharp decrease in blood pressure. It does not reduce exercise tolerance and left ventricular ejection fraction. In patients with angina, a single daily dose of amlodipine increases exercise time, slows the development of angina and ischemic depression of the ST segment (1 mm), reduces the frequency of strokes and consumption of Nitroglycerin and other nitrates. Reduces the degree of left ventricular myocardial hypertrophy, has anti-atherosclerotic and cardioprotective effects in coronary heart disease (CHD). In patients with coronary artery disease (including coronary atherosclerosis with a lesion of one vessel and up to stenosis of three or more arteries and atherosclerosis of the carotid arteries) who have suffered a myocardial infarction, percutaneous transluminal angioplasty of the coronary arteries (TLAP) or suffering from angina pectoris,amlodipine prevents the development of thickening intima-media carotid arteries significantly reduces mortality from cardiovascular causes, myocardial infarction, stroke, PTCA, coronary artery bypass surgery, reduces the number of hospitalizations for unstable angina and progression of chronic heart failure, reduces the frequency of interventions to restore coronary blood flow. Amlodipine does not increase the risk of death or the development of complications leading to death in patients with chronic heart failure (III-IV functional class according to the classification of the New York Heart Association (NYHA)) during therapy with Digoxin, diuretics and angiotensin-converting enzyme inhibitors (ACF). In patients with chronic heart failure (III-IV functional class according to the NYHA classification) of non-ischemic etiology when using amlodipine, there is a likelihood of pulmonary edema. Does not affect the contractility and conductivity of the myocardium, does not cause a reflex increase in heart rate (HR), inhibits platelet aggregation, increases the glomerular filtration rate, has a weak natriuretic effect. In diabetic nephropathy does not increase the severity of microalbuminuria. It does not adversely affect the metabolism and the concentration of lipids in the blood plasma and can be used in the treatment of patients with bronchial asthma, diabetes mellitus and gout.The onset of the effect of the drug - 2-4 hours, the duration of the effect - 24 hours. With prolonged therapy, the maximum reduction in blood pressure occurs within 6-12 hours after taking amlodipine inside. If, after prolonged treatment, amlodipine is withdrawn, an effective reduction in blood pressure persists for 48 hours after taking the last dose. Then the blood pressure indicators gradually return to the initial level within 5-6 days.

Absorption is slow, does not depend on food intake, is about 90%. Bioavailability is 60-90%, the maximum concentration in serum is observed after 6-12 hours after administration. The volume of distribution is approximately 21 l / kg of body weight, which indicates that most of the drug is in the tissues, and relatively less in the blood. Most of the drug in the blood (95-97%) is bound to plasma proteins. Amlodipine penetrates the blood-brain barrier. Hemodialysis is not removed. The equilibrium concentration of amlodipine in the blood plasma (Css) is reached after 7-8 days of continuous administration of the drug. Amlodipine undergoes a slow but extensive metabolism (90%) in the liver with the formation of inactive metabolites, has the effect of "primary" passage through the liver. Metabolites do not have significant pharmacological activity. After a single intake, the half-life (T1 / 2) varies from 31 to 48 hours, with repeated administration of T1 / 2 is approximately 45 hours - which corresponds to the purpose of the drug 1 time per day.The total clearance of amlodipine is 0.116 ml / s / kg (7 ml / min / kg, 0.42 l / h / kg). In elderly patients (over 65), the elimination of amlodipine is slow (T1 / 2 increases to 65 hours) compared with younger patients. In elderly and young patients, the time required to achieve the maximum concentration of amlodipine in the blood plasma is almost the same. In patients with hepatic insufficiency and with severe chronic heart failure, T1 / 2 increases to 56-60 hours. T1 / 2 from blood plasma in patients with renal insufficiency increases to 60 hours. The change in plasma amlodipine concentration does not correlate with the degree of renal impairment. About 60% of the ingested dose is excreted by the kidneys mainly in the form of metabolites, 10% in unchanged form, with bile and through the intestines - 20-25% in the form of metabolites.

Hypersensitivity to amlodipine, other derivatives of dihydropyridine and other components of the drug;
- severe hypotension (systolic blood pressure less than 90 mm Hg);
- cardiogenic shock;
- acute myocardial infarction during the first 28 days;
- unstable angina (with the exception of vasospastic);
- obstruction of the outflow tract of the left ventricle (including clinically significant aortic stenosis);
- age up to 18 years;
- lactose intolerance, lactase deficiency, glucose-galactose malabsorption.

The safety of use of amlodipine during pregnancy has not been established, therefore, use during pregnancy is possible only when the use of the drug for the mother outweighs the potential risk to the fetus. There is no evidence of excretion of amlodipine in breast milk. However, it is known that other blockers of "slow" calcium channels - derivatives of dihydropyridine, are excreted in breast milk. In this connection, if necessary, the appointment of the drug Amlorus® during lactation should decide on the termination of breastfeeding. Women of childbearing age should use reliable methods of contraception.

Tablets are taken once inside with a necessary volume of water (up to 100 ml).
For treatmentarterial hypertension and angina pectoris the initial dose is 5 mg of the drug 1 time per day. Depending on the individual response of the patient, if necessary, the dose may be increased to a maximum of 10 mg once a day.
In hypertension, the maintenance dose may be 5 mg per day. With vasospastic angina (Prinzmetal's angina) - 5-10 mg per day, once.
No dose changes are required when administered concomitantly with thiazide diuretics, beta-blockers and ACE inhibitors.
In patients with hepatic insufficiency, elderly patients, a dose change may be required, the initial dose for hypertension may be 2.5 mg.
When prescribing the drug to patients with renal insufficiency, no changes in dosage regimen are required.

Symptoms: pronounced decrease in blood pressure with the possible development of reflex tachycardia and excessive peripheral vasodilation (there is a likelihood of severe and persistent arterial hypotension, including with the development of shock and death).


Treatment: gastric lavage, the appointment of Activated carbon, maintaining the function of the cardiovascular system, monitoring indicators of heart function and lungs, the elevated position of the lower extremities, control over the volume of circulating blood and diuresis. To restore vascular tone - the use of vasoconstrictor drugs (in the absence of contraindications to their use); to eliminate the effects of calcium channel blockade, intravenous administration of Calcium gluconate. Since amlodipine is largely bound to serum proteins, hemodialysis is ineffective.

Use with other drugs

When treating arterial hypertension, Amlorus® can be used in combination with thiazide diuretics, alpha-blockers, beta-blockers, and ACE inhibitors.For the treatment of stenocardia, Amlorus® can be combined with other antianginal agents, for example, with prolonged or short-acting nitrates, beta-blockers. Amlorus® can also be used in cases when the patient is prone to vascular spasm (vasoconstriction). Amlorus® does not affect plasma concentrations of potassium ions, glucose, triglycerides, total cholesterol, low density lipoproteins, uric acid, creatinine and urea nitrogen and can be used in the treatment of patients with bronchial asthma, diabetes mellitus and gout. Patients with low body mass, patients of short stature and patients with severe liver dysfunction as an antihypertensive agent Amlorus® are prescribed in an initial dose of 2.5 mg, as an antianginal medication - 5 mg. During treatment, it is necessary to control body weight and sodium intake, indicated the appointment of an appropriate diet, observation at the dentist (to prevent pain, bleeding and gingival hyperplasia). Although the drug has no “withdrawal” syndrome, a gradual reduction in doses is recommended before discontinuing treatment. Impact on the ability to drive motor vehicles and control mechanisms During the period of treatment, care should be taken when driving and engaging in potentially hazardous activities that require increased concentration and psychomotor reactions.

In a dry, dark place, at a temperature not higher than 25 ° C. Keep out of reach of children.