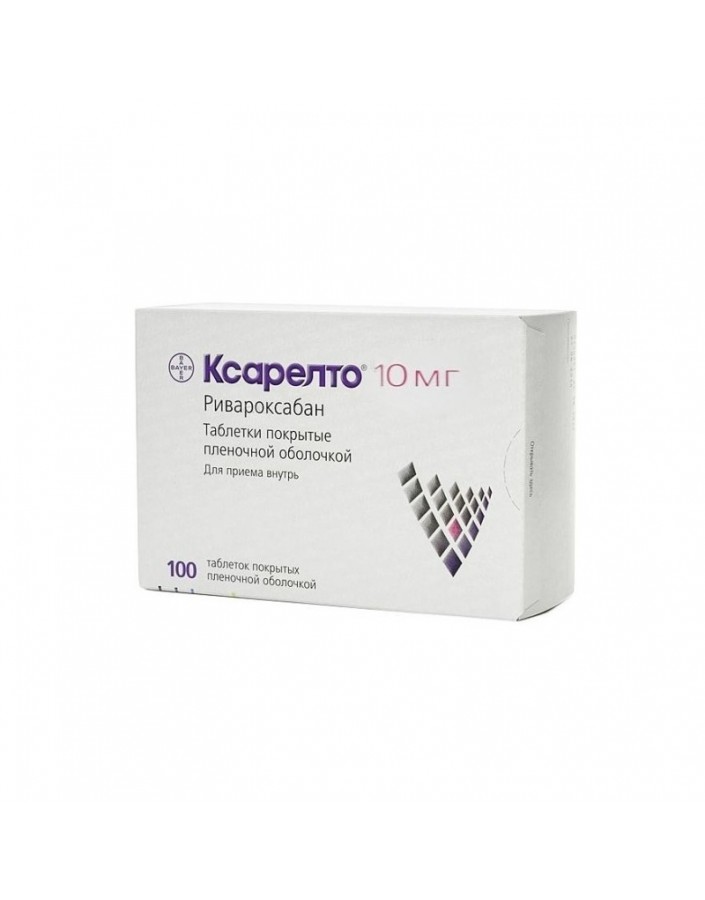 pink webs coated with film; extruded by engraving: on one side - a triangle designation

Type of pills in a break: homogeneous mass of white color, surrounded by a pink shell.

Rivaroxaban is a highly selective direct inhibitor of factor Xa, with high bioavailability when administered.

Activation of factor X to form factor Xa through the internal and external coagulation pathway plays a central role in the coagulation cascade.

In humans, dose-dependent inhibition of factor Xa was observed. Rivaroxaban has a dose-dependent effect on prothrombin time and closely correlates with plasma concentrations (r = 0.98) if the Neoplastin kit is used for analysis. When using other reagents, the results will differ. Prothrombin time should be measured in seconds, because the INR (international normalized ratio) is calibrated and certified only for coumarin derivatives and cannot be used for other anticoagulants. In patients undergoing large orthopedic surgeries, 5/95 percent for prothrombin

After two to four hours after taking the pill (i.e., at the maximum effect), they vary from 13 to 25 seconds.

Also, rivaroxaban dose-dependently increases the activated partial thromboplastin time (ACTV) and the result of HepTest; however, these parameters are not recommended for evaluating the pharmacodynamic effects of rivaroxaban. During treatment with rivaroxaban, monitoring of blood clotting parameters is not required.

However, if there is a clinical justification for this

(for example, in case of an overdose of the drug or, if necessary, emergency surgery), the concentration of rivaroxaban can be measured using a calibrated quantitative test

In healthy men and women over 50, the QT interval is longer

under the influence of rivaroxaban was not observed.

The absolute bioavailability of rivaroxaban after a dose of 10 mg is high (80-100%).

Rivaroxaban is rapidly absorbed; The maximum concentration (Сmax) is reached in 2-4 hours after taking the pill.

When receiving rivaroxaban in a dose of 10 mg with food, no changes were noted

AUC (area under the curve "concentration - time") and Cmax (maximum concentration). Rivaroxaban in a dose of 10 mg can be prescribed for admission during meals or regardless of the meal.

The absorption of rivaroxaban depends on the place of release in the gastrointestinal tract (GIT). A decrease of 29% and 56% in AUC and Cmax, respectively, compared to taking the whole tablet, was observed when rivaroxaban granulate was released in the distal small intestine or ascending colon.

It is necessary to avoid the introduction of Riva aroxaban into the gastrointestinal tract distal to the stomach, since this may entail a decrease in the absorption and, accordingly, the exposure of the drug.

ban taken orally in the form of a crushed pill in a mixture with applesauce or suspended in water, as well as introduced through a gastric tube, followed by a liquid intake, in comparison with the intake of a whole tablet. The results demonstrated a predictable dose-dependent pharmacokinetic profile of rivaroxaban, while the bioavailability at the above mentioned dosage was consistent with that of the lower

In humans, a large part of rivaroxaban (92-95%) binds to plasma proteins, with serum albumin as the main binding component. The volume of distribution is moderate, Vss is approximately 50 liters.

When ingested approximately 2/3 of the prescribed dose, rivaroxaban is metabolized and subsequently excreted in equal parts.

by the kidneys and through the intestines.

The remaining 1/3 dose is eliminated by direct renal excretion unchanged, mainly due to active renal secretion.

Rivaroxaban is metabolized by isoenzymes CYP3A4, CYP2J2, as well as through mechanisms independent of the cytochrome system. The main sites of biotransformation are the oxidation of the morpholine group and the hydrolysis of amide bonds.

According to in vitro data, rivaroxaban is a substrate for P-gp (P-glycoprotein) and Bcrp (protein resistance protein

Unchanged rivaroxaban is the only active compound in human plasma, and no significant or active circulating metabolites are found in plasma. Rivaroxaban, the systemic clearance of which is approximately 10 l / h, can be attributed to drugs with a low level of clearance. When removing rivaroxaban from plasma, the final half-life is from 5 to 9 hours in young patients and from 11 to 13 hours in elderly patients.

In elderly patients, plasma concentrations of rivaroxaban are higher than in younger patients, the average value of AUC is approximately 1.5 times

exceeds the corresponding values ​​in young patients, mainly due to the apparent decrease in total and renal clearance.

In men and women, clinically significant differences in pharmacokinetics were not found.

Too small or large body weight (less than 50 kg and more than 120 kg) only slightly affects the concentration of rivaroxaban in plasma (the difference is less than 25%).

Data for this age category are not available.

the dynamics of pharmaco-dynamics in patients of Caucasian, African American, Latin American, Japanese or Chinese ethnicity were not observed.

Rivaroxaban is contraindicated in patients with liver disease that occurs with coagulopathy, causing a clinically significant risk of bleeding. In patients with cirrhosis of the liver with a mild degree of liver failure (class A for Child-Pugh), the pharmacokinetics of rivaroxaban differed only slightly (on average, there was an increase in AUC

rivaroxaban 1.2 times) of the corresponding indicators in the control group of healthy subjects. There were no significant differences in pharmacodynamic properties between the groups.

In patients with cirrhosis and liver failure of moderate severity (Child-Pugh class B), the average AUC of rivaroxaban was significantly increased (2.3 times) compared with healthy volunteers due to significantly reduced clearance of the drug substance,indicating serious liver disease. The suppression of the activity of factor Xa was more pronounced (2.6 times) than in healthy volunteers. The prothrombin time is also 2.1 times higher than in healthy

I, which are synthesized in the liver. Patients with moderate hepatic insufficiency are more sensitive to rivaroxaban, which is a consequence of a closer relationship between pharmacodynamic effects and pharmacokinetic parameters, especially between concentration and prothrombin time.

Data for patients with hepatic insufficiency of class C according to the Child-Pu classification are not available.

In patients with renal failure, an increase in plasma rivaroxaban concentration was observed, inversely proportional to the decrease in renal function, as measured by creatinine clearance.

The corresponding increase in pharmacodynamic effects was more pronounced.

Data on the use of rivaroxaban in patients with creatinine clearance

Inside, regardless of the meal. In order to prevent VTE during large orthopedic operations, it is recommended to prescribe 1 pill of 10 mg 1 time per day.

The initial dose should be taken 6-10 hours after surgery, provided hemostasis is achieved.

If the patient is not able to swallow the pill whole, Xarelto may be crushed and mixed with water or liquid food, such as applesauce, just before ingestion.

The crushed Xarelto pill can be administered via a gastric tube. The position of the probe in the gastrointestinal tract must be further coordinated with the doctor before taking Xarelto. The crushed pill should be administered through a stomach tube in a small amount of water, after which a small amount of water must be introduced in order to wash off the remnants of the preparation from the probe walls.

If a patient misses a dose, rivaroxaban should be taken immediately and the next day, continue with treatment, 1 pill per day, as before.

Dose adjustment depending on the age of the patient (over 65 years), gender, body weight or ethnic group is not required.

Rivaroxaban is contraindicated in patients with liver disease, accompanied by coagulopathy, which causes a clinically significant risk of bleeding.

Patients with other liver diseases are not required to change the dose.

B on Child-Pugh), indicate a significant increase in the pharmacological activity of the drug.

When prescribing rivaroxaban in patients with renal insufficiency

Rivaroxaban should be used to treat this category of patients.

The use of rivaroxaban is not recommended in patients with creatinine clearance <15 ml / min.

Transfer of patients from vitamin K (AVK) antagonists to Xarelto

When transferring a patient from AVK to Xarelto, the value of the INR value will falsely increase after taking Xarelto. In this regard, the indicator of INR can not be used to control the anticoagulant effect of Xarelto.

Transfer of patients with Xarelto to vitamin K antagonists (AVK)

When transferring a patient from Xarelto to AVK, both drugs should

Assign simultaneously until the INR reaches ≥2.0. In the first two days of the transition period, a standard dose of AVK should be used, and subsequently, be guided by the value of the INR. During the period of joint administration of Xarelto and AVC, the INR should be determined not earlier than 24 hours (after the previous one, but before taking the next dose of Xarelto).After the cancellation of Xarelto, the definition of INR with a sufficient degree of reliability

(see "Interaction with other medicinal products and other forms of interaction").

Transfer of patients from parenteral anticoagulants to Xarelto

When transferring a patient from parenteral anticoagulants to Xarelto

Transfer of patients with Xarelto on a pair of oral coagulants

Stop taking Xarelto and inject the first dose of the parenteral anticoagulant during the intended use of the next dose of Xarelto.