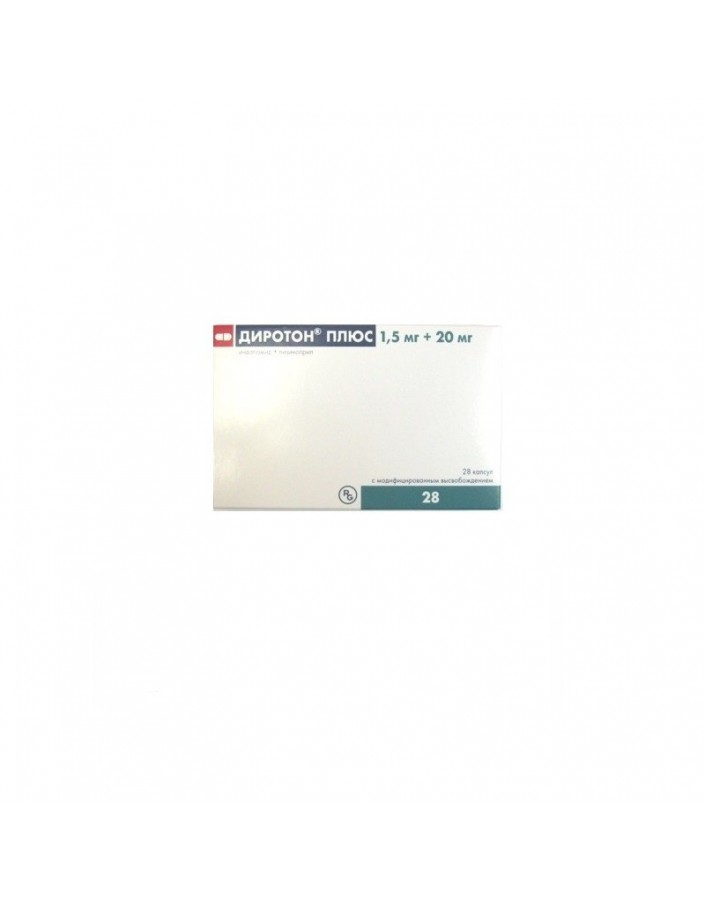 Combined preparation with fixed doses of lisinopril and Indapamide.

It is an ACE inhibitor that inhibits the conversion of angiotensin I to angiotensin II. A decrease in the concentration of angiotensin II leads to a direct decrease in the secretion of aldosterone. Lisinopril suppresses the degradation of bradykinin and increases the synthesis of prostaglandins. Reduces the OPSS, blood pressure, preload and pressure in the pulmonary capillaries. In patients with chronic heart failure, lisinopril increases the minute volume of blood and increases the tolerance of the myocardium to stress. Expands arteries to a greater extent than veins. Some effects are attributed to effects on tissue renin-angiotensin systems. With prolonged use, hypertrophy of the myocardium and the walls of resistive arteries is reduced. Lisinopril improves blood supply to the ischemic myocardium.

Lisinopril begins to act within 1 h after ingestion.The maximum effect is achieved within 6-7 hours; effect duration 24 hours. In patients with arterial hypertension, the effect appears during the first days after the start of treatment; stable effect occurs within 1-2 months of treatment. Cases of a marked increase in blood pressure after abrupt withdrawal of the drug are not registered. Lisinopril reduces both blood pressure and albuminuria. In patients with hyperglycemia, lisinopril helps to restore impaired function of the glomerular endothelium. In patients with diabetes, lisinopril has no effect on plasma glucose concentration; taking the drug is not associated with an increased risk of hypoglycemia.

It is a derivative of sulfonamide. By its pharmacological properties, indapamide is close to thiazide-like diuretics. Indapamide inhibits the reabsorption of sodium ions in the cortical segment of the loop of Henle. This is accompanied by an increase in the excretion of sodium, chlorine and potassium ions and, to a lesser extent, Magnesium ions, which leads to increased diuresis and antihypertensive effect. In clinical studies of phase II and phase, the use of indapamide as monotherapy in doses that did not cause a pronounced diuretic effect caused a 24-hour antihypertensive effect.

The antihypertensive activity of indapamide leads to an improvement in the elasticity index of the large arteries and to a decrease in the total peripheral and arteriolar resistance. Indapamide reduces left ventricular hypertrophy.In certain doses, the optimal therapeutic effect of thiazide and thiazide-like diuretics is achieved, however, with a further increase in the dose, the frequency of side effects increases. Thus, the dose should not be increased if the therapeutic effect is not observed when using the drug at the recommended therapeutic doses.

In short-term, medium-term and long-term studies, in which hypertensive patients took part, it was shown that indapamide does not affect lipid metabolism (including the concentration of triglycerides, cholesterol, LDL and HDL) and carbohydrate metabolism, including in patients with diabetes.

When receiving lisinopril inside of the digestive tract absorbed about 25% of the drug. Food intake does not affect absorption. The average level of absorption is 30%; bioavailability - 29%. Cmax in blood plasma is achieved 6-8 hours after ingestion. The degree of binding to plasma proteins is low. Lisinopril poorly penetrates the BBB.

Lisinopril does not undergo biotransformation in the human body. T1/2 - 12 hours

Indapamide is quickly and completely absorbed from the gastrointestinal tract. Meal slightly increases the time of absorption of indapamide, while not affecting the amount of suction. WITHmax indapamide is achieved 12 hours after a single dose. With repeated use of the drug changes in drug concentration in the blood plasma between doses of the drug smoothed out.Individual variability of the magnitude of absorption is noted.

Approximately 79% of the drug is bound to plasma proteins. Css achieved 7 days after the start of therapy. Repeated administration does not lead to drug accumulation.

The drug is taken orally, regardless of the meal, preferably in the morning, at the same time every day.

Drug is prescribed for adults patients who have achieved adequate control of hypertension against the background of the use of lisinopril and indapamide, which the patient takes at the same time in the same doses as in the combined preparation. If necessary, dose selection should be applied indapamide and lisinopril separately.

Have patients with impaired renal function against the background of drug therapy, it is necessary to control the kidney function, as well as the content of potassium and sodium in the blood plasma. If the renal function deteriorates, the drug should be withdrawn.

Safety and efficacy of the drug in children and adolescents under the age of 18 not installed.

It should be used with caution in elderly patients (> 65 years). It is necessary to monitor the concentration of creatinine in the blood plasma and assess its consistency with age, body weight and sex.

The following undesirable drug reactions have been reported with isolated administration of lisinopril and indapamide.

From the genital and breast organs: infrequently - a decrease in potency.

Most of the adverse reactions (laboratory and clinical changes) are dose-dependent.

From the skin and subcutaneous tissue: often - makulo-papular rash; infrequently - hemorrhagic vasculitis. Cases of photosensitivity reactions have been reported.

Impact on the results of laboratory and instrumental studies: frequency is unknown - an increase in the concentration of uric acid and glucose (in patients with gout and diabetes, treatment with thiazide and thiazide-like diuretics should be carried out with caution).In clinical studies, hypokalemia was observed in 10% of patients (the content of potassium in the blood plasma was less than 3.4 mmol / l) and in 4% of patients - 3.2 mmol / l after 4-6 weeks of treatment. After 12 weeks, the content of potassium in the blood plasma decreased, on average, by 0.23 mmol / l; very rarely, hypercalcemia; frequency is unknown - a decrease in the potassium content and the development of hypokalemia, especially significant for patients at risk; hyponatremia, accompanied by hypovolemia, dehydration and orthostatic hypotension. A concomitant decrease in the chloride content may lead to a compensatory metabolic alkalosis, but its frequency and severity are insignificant.

The use of the drug is contraindicated in pregnancy and lactation.

Contraindicated use of the drug for hepatic encephalopathy or severe abnormal liver function.

Use of the drug is contraindicated in severe renal failure (CC <30 ml / min).

The drug is contraindicated at the age of 18 years (efficacy and safety have not been established).

Precautions should be prescribed medication to elderly patients.

If thiazide and thiazide-like diuretics are prescribed to patients with impaired liver function, hepatic encephalopathy may develop, especially in the presence of electrolyte imbalance. In this case, it is necessary to stop the use of diuretics.

When using thiazide and thiazide-like diuretics, photosensitization has been reported. With the development of photosensitivity during therapy shows the abolition of these drugs. If necessary, continue the treatment recommended protection of the skin from sunlight or artificial UV radiation.

The content of sodium in the blood plasma must be determined before the start of treatment. During the entire period of therapy is shown regular monitoring of this parameter. All diuretics can cause hypo