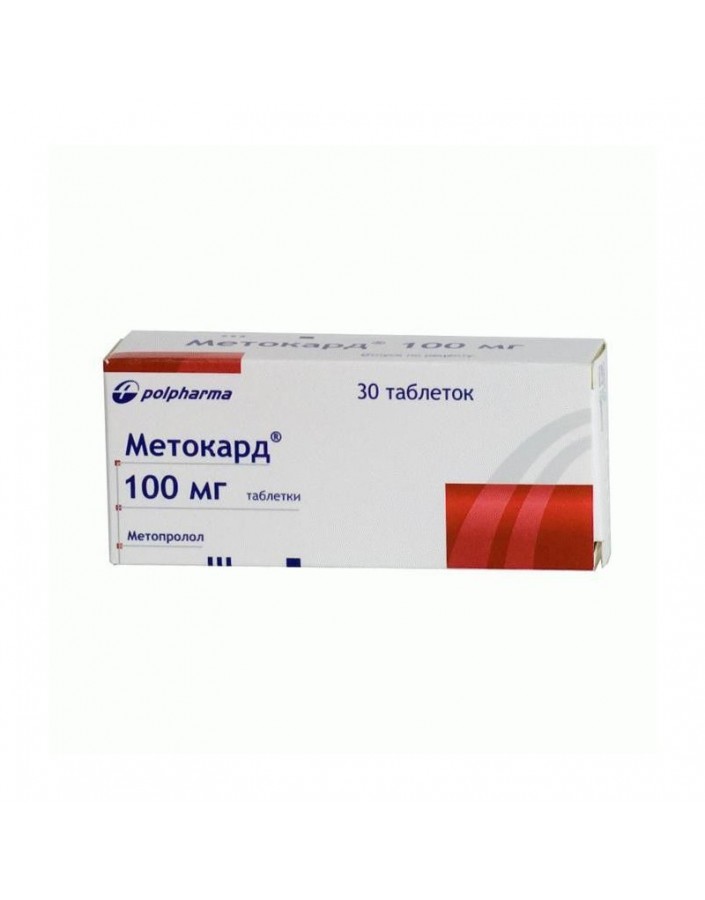 In 1 blister 10 tablets. In a cardboard bundle 3 blisters.

Metocard is a cardioselective beta 1 -blocker with no internal sympathomimetic activity and membrane stabilizing properties. It has antihypertensive, antianginal, antiarrhythmic effect.

OPS at the beginning of the use of A-adrenergic blockers (in the first 24 hours after oral administration) increases (as a result of the reciprocal increase in the activity of β-adrenoreceptors and the elimination of stimulation of A2-adrenoreceptors), which after 1-3 days returns to the original, and with long-term administration going down.

The acute antihypertensive effect is due to a decrease in cardiac output, a stable antihypertensive effect develops within 2-3 weeks and is due to a decrease in renin synthesis and accumulation of plasma renin,inhibition of the activity of the renin-angiotensin system (it is of great importance in patients with initial renin hypersecretion) and the central nervous system, restoration of the sensitivity of the baroreceptors of the aortic arch (there is no increase in their activity in response to a decrease in blood pressure) and, as a result, a decrease in peripheral sympathetic influences. Reduces increased blood pressure at rest, with physical exertion and stress.

Blood pressure decreases after 15 minutes, as much as possible after 2 hours and the decrease continues for 6 hours, diastolic blood pressure changes more slowly: a steady decrease is observed after several weeks of regular use.

Antiarrhythmic effect is due to the elimination of arrhythmogenic factors (tachycardia, increased sympathetic nervous system activity, increased cAMP levels, hypertension), decrease the rate of spontaneous excitation of the sinus and ectopic pacemaker and deceleration atrioventricular conduction (preferably antegrade and to a lesser extent, in the retrograde direction through the AV node) and along additional paths.

When supraventricular tachycardia, atrial fibrillation, sinus tachycardia with functional heart disease and hyperthyroidism, the drug slows heart rate or may even lead to the restoration of sinus rhythm. Prevents migraine development.

When used in moderate therapeutic doses, in contrast to non-selective beta-blockers, it has a less pronounced effect on organs containing A2-adrenoreceptors (pancreas, skeletal muscles, smooth muscles of the peripheral arteries, bronchi and uterus) and carbohydrate metabolism. When used in large doses (more than 100 mg / day), it has a blocking effect on both A-adrenoreceptor subtypes.

Precautions should be prescribed when:

In pregnancy, Metocard should be used only when the intended benefit to the mother outweighs the potential risk to the fetus.

Metoprolol penetrates the placental barrier. If necessary, the use of the drug during pregnancy due to the possible development of newborn bradycardia, hypotension, hypoglycemia, it is necessary to ensure careful monitoring of the development of the fetus. After delivery, it is necessary to ensure strict monitoring of the condition of the newborn within 48-72 hours.

Metoprolol is excreted in breast milk. The effect of metoprolol on a newborn has not been studied, so if you need to use Metocardia during lactation, breastfeeding should be stopped.

The drug is taken orally at the same time with a meal or immediately after a meal. pills can be divided in half, but not chewed, and drink down with liquid.

The dose is determined individually depending on the tolerance and therapeutic efficacy. The maximum dose is 400 mg / day.

In hypertension, the initial dose is 50-100 mg / day. in 1-2 doses. If necessary, the daily dose is gradually increased to 100-200 mg. In the absence of a satisfactory therapeutic effect, Metocard may be administered in combination with other antihypertensive agents. The maximum daily dose is 200 mg.

For angina, arrhythmias, prevention of migraine attacks, 100-200 mg / day is prescribed. in 2 doses (in the morning and in the evening).

In the secondary prevention of myocardial infarction prescribed in a dose of 200 mg / day. in 2 doses (in the morning and in the evening).

When functional disorders of the heart, accompanied by tachycardia, the drug is prescribed at a dose of 100 mg / day. in 2 doses (in the morning and in the evening).

Elderly patients, with impaired renal function, as well as with the need for hemodialysis, do not require dose adjustment.

In case of abnormal liver function, the dose should be reduced depending on the clinical condition.

On the part of the respiratory system: nasal congestion, difficulty breathing out (bronchospasm when administered at high doses - loss of selectivity and / or in predisposed patients), shortness of breath.

On the part of the endocrine system: hyperglycemia in patients with insulin-dependent diabetes mellitus, hypothyroidism.

Other: back pain or joint pain; in rare cases - a slight increase in body weight, decreased libido and / or potency.

Side effects depend on the individual sensitivity of the patient. Usually they are minor and disappear after discontinuation of the drug.

The patient should be trained in the method of counting heart rate and instructed on the need for medical consultation with a heart rate less than 50 beats / min. When you receive a dose higher than 200 mg / day. decreases cardioselectivity.

In heart failure, treatment with metoprolol begins only after reaching the stage of compensation.

It is possible to increase the severity of hypersensitivity reactions (against the background of an aggravated allergic history) and the lack of effect from the administration of usual doses of epinephrine (adrenaline).

The abolition of the drug is carried out gradually, reducing the dose within 10 days.

With a sharp cessation of treatment may cause withdrawal (increased angina attacks, increased blood pressure). Particular attention in case of drug withdrawal should be given to patients with angina.

In case of angina pectoris, the selected dose of the drug should provide the heart rate at rest within 55-60 beats / min, with a load - no more than 110 beats / min.

Patients using contact lenses should take into account that during treatment with beta-blockers it is possible to reduce the production of tear fluid.

Metoprolol may mask some clinical manifestations of hyperthyroidism (for example, tachycardia). Sharp cancellation in patients with thyrotoxicosis is contraindicated, as it can strengthen the symptoms.

In diabetes metocology, Metocardia may mask tachycardia caused by hypoglycemia. Unlike non-selective beta-adrenergic blockers, insulin-induced hypoglycemia practically does not increase and does not delay the restoration of blood glucose concentration to normal levels.

If necessary, the appointment of patients with asthma as a concomitant therapy using stimulants? 2 -adrenoreceptors; with pheochromocytoma - alpha-blockers.

If surgery is necessary, the anesthesiologist should be warned about the therapy being conducted (the choice of anesthetics for general anesthesia with minimal negative inotropic effects), and it is not recommended to cancel the drug.

Drugs that reduce the supply of catecholamines (for example, reserpine) can enhance the effect of beta-blockers, so patients taking such combinations of drugs should be under constant medical supervision to detect excessive blood pressure and bradycardia.

In elderly patients, it is recommended to regularly monitor liver function.Correction of the dosing regimen is required only if an increasing bradycardia (less than 50 beats / min) appears in the elderly patient, a pronounced decrease in blood pressure (systolic blood pressure below 100 mm Hg), AV blockade, bronchospasm, ventricular arrhythmias, and severe liver function disorders It is sometimes necessary to discontinue treatment.

Special monitoring should be carried out for patients with depressive disorders taking metoprolol; in case of development of depression caused by taking beta-blockers, it is recommended to stop therapy.

With caution should use the drug for severe violations of the liver.

With caution should use the drug for pronounced impaired renal function.

The safety and efficacy of the drug in children and adolescents under the age of 18 years has not been established.

At the beginning of treatment with metoprolol, patients may experience dizziness, fatigue. In this case, they should refrain from driving vehicles and engaging in potentially hazardous activities that require increased concentration and psychomotor speed. In the future, this issue should be resolved after evaluating the patient's individual response to the therapy being conducted.

Not recommended simultaneous use with MAO inhibitors due to a significant increase in the hypotensive effect.The interval between taking MAO and metoprodol inhibitors should be at least 14 days.

Simultaneous i / v verapamil may cause cardiac arrest. The simultaneous appointment of Nifedipine leads to a significant reduction in blood pressure.

Against the background of simultaneous use with Metocardia, agents for general inhalation anesthesia (hydrocarbon derivatives) increase the risk of inhibition of myocardial function and development of arterial hypotension; beta-adrenergic stimulants, theophylline, cocaine, estrogens (sodium retention), Indomethacin and other NSAIDs (sodium retention and blocking the synthesis of prostaglandin by the kidneys) weaken the hypotensive effect.

There is an increase in the inhibitory effect on the central nervous system, while applying with ethanol; the sum of the cardiodepressive effect - with the means for general anesthesia; increased risk of peripheral circulatory disorders - with ergot alkaloids.

When taken together with oral hypoglycemic agents, their effect may be reduced; with insulin - increasing the risk of hypoglycemia, increasing its severity and duration, masking some of the symptoms of hypoglycemia (tachycardia, sweating, increased blood pressure).

When combined with antihypertensive drugs, diuretics, Nitroglycerin or slow Calcium channel blockers, a sharp decrease in blood pressure may develop (special caution is necessary when combined with prazosin).

If metoprolol and clonidine are taken at the same time, then if you cancel metoprolol, clonidine is canceled after a few days (due to the risk of withdrawal syndrome).

Metoprolol with simultaneous use reduces the clearance of xanthine (except for difillina), especially with initially increased clearance of theophylline under the influence of smoking; reduces Lidocaine clearance, increases the concentration of lidocaine in the blood plasma.

The method of simultaneous application enhances and prolongs the action of anti-depolarizing muscle relaxants, prolongs the anticoagulant effect of coumarins.

The combined use of Metocard with ethanol increases the risk of a pronounced decrease in blood pressure.

Symptoms: severe severe sinus bradycardia, dizziness, nausea, vomiting, cyanosis, marked reduction in blood pressure, arrhythmia, ventricular extassistoliya, bronchospasm, syncope, in acute overdose - cardiogenic shock, loss of consciousness, coma, AV blockade heart), cardialgia. The first signs of overdose appear within 20 min-2 h after taking the drug.
Treatment: gastric lavage and the appointment of adsorbing agents, symptomatic therapy: with a marked decrease in blood pressure, the patient should be in the Trendelenburg position; in case of excessive decrease in blood pressure, bradycardia and heart failure - in / in the introduction (with an interval of 2-5 minutes) beta-adrenostimulyatorov to achieve the desired effect or in / in the introduction of 0.5-2 mg atropine sulfate. In the absence of a positive effect, administration of dopamine, dobutamine or norepinephrine (norepinephrine). As a follow-up, perhaps, the appointment of 1-10 mg of glucagon, staging transvenous intracardial electrostimulator. In case of bronchospasm, a2-adrenoreceptor stimulants should be administered intravenously.

Metoprolol is poorly excreted by hemodialysis.

The drug should be stored in a dry, dark place at temperatures not above 25 ° C.