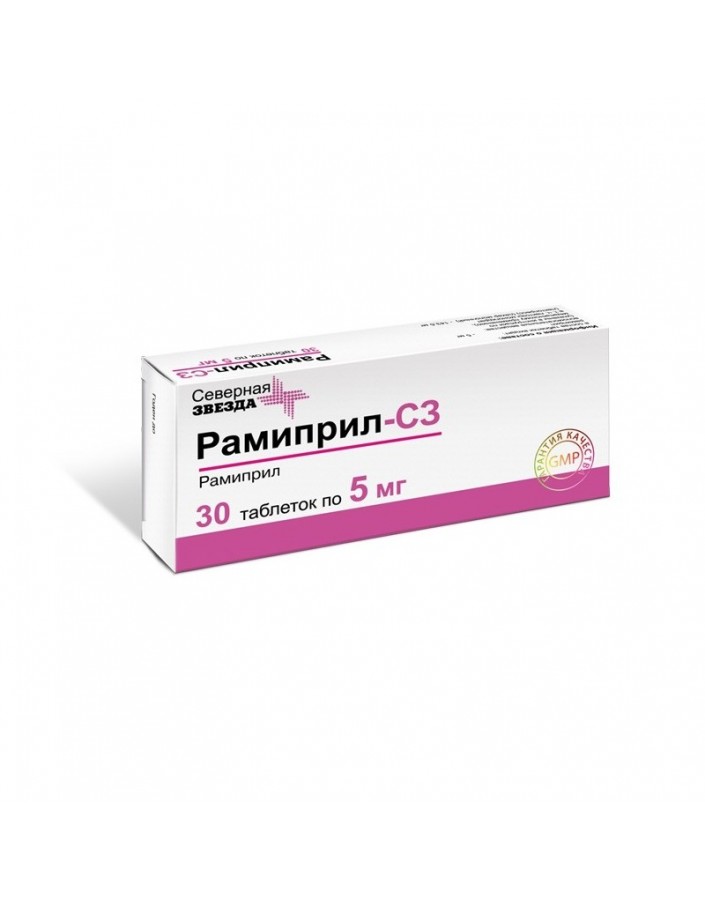 pills of white or white with a grayish shade of color, round, flat-cylindrical, with a chamfer.

Pharmacodynamics.
The active metabolite of ramipril, ramiprilat, formed under the influence of “liver” enzymes, is a long-acting ACE inhibitor, which is a peptidyl dipeptidase. ACE in plasma and tissues catalyzes the conversion of angiotensin I to angiotensin II and the breakdown of bradykinin.
Therefore, when ramipril is taken orally, the formation of angiotensin II is reduced and the accumulation of bradykinin occurs, which leads to the expansion of blood vessels and a decrease in the arterial pressure (BP). The increased activity of the kallikrein-kinin system in the blood and tissues causes the cardioprotective and endothelioprotective action of ramipril due to the activation of the prostaglandin system and, accordingly, an increase in the synthesis of prostaglandins,stimulating the formation of nitric oxide (NO) in endotheliocytes.
Angiotensin II stimulates the production of aldosterone, so taking ramipril leads to a decrease in the secretion of aldosterone and an increase in serum concentrations of potassium ion.
By reducing the concentration of angiotensin II in the blood, its inhibitory effect on renin secretion by the type of negative feedback is eliminated, which leads to an increase in plasma renin activity.
It is assumed that the development of some undesirable reactions (in particular, "dry" cough) is also associated with an increase in the concentration of bradykinin.
In patients with arterial hypertension taking ramipril leads to a decrease in blood pressure in the prone position and standing, without a compensatory increase in heart rate (HR). Ramipril significantly reduces total peripheral vascular resistance (OPS), almost without causing changes in the renal blood flow and glomerular filtration rate. The antihypertensive effect begins to appear within 1-2 hours after ingestion of a single dose of the drug, reaching its highest value in 3-9 hours, and persists for 24 hours. In exchange intake, the hypotensive effect may gradually increase, usually stabilizing by 3-4 weeks of regular use of the drug and then persisting for a long time. A sudden stop of taking the drug does not lead to a rapid and significant increase in blood pressure (no withdrawal syndrome).
In patients with arterial hypertension, ramipril slows down the development and progression of myocardial and vascular wall hypertrophy.
In patients with chronic heart failure ramipril reduces round fistula (reduced afterload on the heart), increases the capacity of the venous bed and reduces the filling pressure of the left ventricle, which, respectively, leads to a decrease in preload on the heart. In these patients, when receiving ramipril, there is an increase in cardiac output, ejection fraction, and improvement in exercise tolerance.
With diabetic and non-diabetic nephropathy reception of ramipril slows down the rate of progression of renal failure and the time of onset of end-stage renal failure, and thereby reduces the need for hemodialysis procedures or kidney transplantation. In the initial stages of diabetic or non-diabetic nephropathy, ramipril reduces the severity of albuminuria.
In patients at high risk of developing cardiovascular disease due to the presence of vascular lesions (diagnosed ischemic heart disease, history of peripheral arterial disease, history of stroke) or diabetes mellitus with at least one additional risk factor (microalbuminaria, arterial hypertension, increased concentrations of total cholesterol (OX), reduction of high-density lipoprotein cholesterol (HDL-C) cholesterol,smoking) joining ramipril to standard therapy significantly reduces the incidence of myocardial infarction, stroke and mortality from cardiovascular causes. In addition, ramipril reduces overall mortality, as well as the need for revascularization procedures, and slows the onset or progression of chronic heart failure.
In patients with heart failure that developed in the first days of acute myocardial infarction (2-9 days), when taking ramipril, starting from 3 to 10 days of acute myocardial infarction, the risk of mortality decreases (by 27%), the risk of sudden death (by 30%), the risk of progression of chronic heart failure to severe (III-IV functional class according to NYHA classification ) / resistant to therapy (by 27%), the likelihood of subsequent hospitalization due to the development of heart failure (by 26%).
In the general population of patients, as well as in patients with diabetes mellitus, both with arterial hypertension and with normal blood pressure, ramipril significantly reduces the risk of nephropathy and microalbuminuria.

Additional contraindications when using the drug ramipril in the acute stage of myocardial infarction:

Ramipril is contraindicated during pregnancy, as it can have an adverse effect on the fetus: impaired development of the kidneys of the fetus, lowering blood pressure of the fetus and newborns, impaired renal function, hyperkalemia, hypoplasia of the bones of the skull, oligohardramnion, contracture of the extremities, deformation of the bones of the skull, hypoplasia of the lungs.
Therefore, before starting the drug in women of childbearing age, pregnancy should be excluded.
If a woman is planning a pregnancy, the treatment with ACE inhibitors should be stopped.
If pregnancy occurs during ramipril treatment, it should, as soon as possible, stop taking it and transfer the patient to other drugs, the use of which will have the lowest risk for the child.
If ramipril treatment is necessary during breastfeeding, breastfeeding should be discontinued.

pills must be swallowed whole (do not chew) and drink plenty of water (1/2 cup) of water, regardless of the meal (that is, pills can be taken both before and during or after meals). The dose is selected depending on the therapeutic effect and tolerability of the drug to patients. To ensure the following dosing regimen (dose 1.25 mg), it is necessary to use the drug Rami-prila in another dosage form: 2.5 mg pills with a risk.
Treatment with the drug ramipril is usually long, and its duration in each case is determined by the doctor.
Unless otherwise prescribed, the following dosing regimens are recommended for normal kidney and liver function.
With hypertension
Usually the initial dose is 2.5 mg 1 time per day in the morning. If, when taking the drug in this dose for 3 weeks or more, it is not possible to normalize blood pressure, then the dose may be increased to 5 mg of ramipril per day.With insufficient effectiveness of the dose of 5 mg in 2-3 weeks, it can be doubled to the maximum recommended daily dose of 10 mg per day (1 pill 5 mg 2 times a day is possible).
As an alternative to increasing the dose to 10 mg per day with insufficient hypotensive efficacy of a daily dose of 5 mg, other antihypertensive agents, in particular diuretics or “slow” Calcium channel blockers, can be added to the treatment.
In chronic heart failure
Recommended initial dose: 1.25 mg 1 time per day. Depending on the response to the patient's therapy, the dose may increase. It is recommended to double the dose at intervals of 1-2 weeks.
The maximum recommended daily dose is 10 mg.
With diabetic or non-diabetic nephropathy
Recommended initial dose: 1.25 mg 1 time per day. The dose may be increased to 5 mg once a day.
To reduce the risk of myocardial infarction, stroke or cardiovascular mortality in patients with high cardiovascular risk
The recommended initial dose: 2.5 mg 1 time per day. Depending on the patient's tolerance of the drug, the dose can be gradually increased. It is recommended to double the dose after 1 week of treatment, and in the next 3 weeks of treatment to increase it to the usual maintenance dose of 10 mg 1 time per day.
The use of the drug in patients with QA less than 0.6 ml / sec has not been studied enough.
In case of heart failure that developed during the first few days (from the 2nd to the 9th day) after acute myocardial infarction
The recommended initial dose is 5 mg per day, divided into two single doses of 2.5 mg, one of which is taken in the morning and the second in the evening. If the patient does not tolerate this initial dose (there is an excessive decrease in blood pressure), then it is recommended that he give 1.25 mg 2 times a day for two days.
Then, depending on the response of the patient, the dose may be increased. It is recommended that the dose with its increase doubled with an interval of 1-3 days. Later, the total daily dose, which was initially divided into two doses, can be given once.
The maximum recommended dose is 10 mg.
Currently, the experience of treating patients with severe heart failure (III-IV functional class according to the NYHA classification), which arose immediately after an acute myocardial infarction, is insufficient. If such patients decide to administer ramipril, it is recommended that treatment should be started with the lowest possible dose - 1.25 mg 1 time per day and special care should be exercised at each dose increase.
The use of the drug ramipril in certain groups of patients
Patients with impaired renal function
When QA is from 50 to 20 ml / min per 1.73 m2 of body surface, the initial daily dose is usually 1.25 mg. The maximum permissible daily dose is 5 mg.
Patients with incompletely corrected fluid and electrolyte loss, patients with severe arterial hypertension, as well as patients for whom excessive blood pressure reduction presents a certain risk (for example, in severe atherosclerotic lesions of the coronary and cerebral arteries)
The initial dose is 1.25 mg per day.
Patients with prior diuretic therapy
It is necessary, if possible, to cancel diuretics in 2-3 days (depending on the duration of the diuretic action) before starting treatment with ramipril, or at least reduce the dose of diuretics taken. Treatment of such patients should begin with the lowest dose of 1.25 mg of ramipril, taken once a day, in the morning. After taking the first dose and each time after increasing the dose of ramipril and (or) "loopback" diuretics, patients should be under medical supervision for at least 8 hours to avoid an uncontrolled hypotensive reaction.
Elderly patients (over 65)
The initial dose is reduced to 1.25 mg per day.
Patients with impaired liver function
The response of blood pressure to taking the drug ramipril can either increase (by slowing the removal of ramiprilat) or decrease (by slowing down the conversion of low-active ramipril to active ramiprilat). Therefore, at the beginning of treatment requires careful medical observation. The maximum permissible daily dose is 2.5 mg.

Symptoms: excessive peripheral vasodilation with the development of a pronounced decrease in blood pressure, shock; bradycardia, impaired water-electrolyte balance, shock, acute renal failure, stupor.
Treatment: in mild cases of overdose: gastric lavage, the introduction of adsorbents, sodium sulfate (preferably within the first 30 minutes after ingestion). The function of vital organs should be monitored. In more severe cases, measures aimed at stabilizing blood pressure: intravenous administration of a 0.9% sodium chloride solution, plasma substitutes, installation of a temporary artificial pacemaker for drug-resistant bradycardia, hemodialysis. With a marked decrease in blood pressure, the introduction of alpha-adrenergic agonists (norepinephrine, dopamine) can be added to the therapy to replenish the circulating blood volume and restore the water-electrolyte balance. In the case of bradycardia, atropine is recommended or prescribed