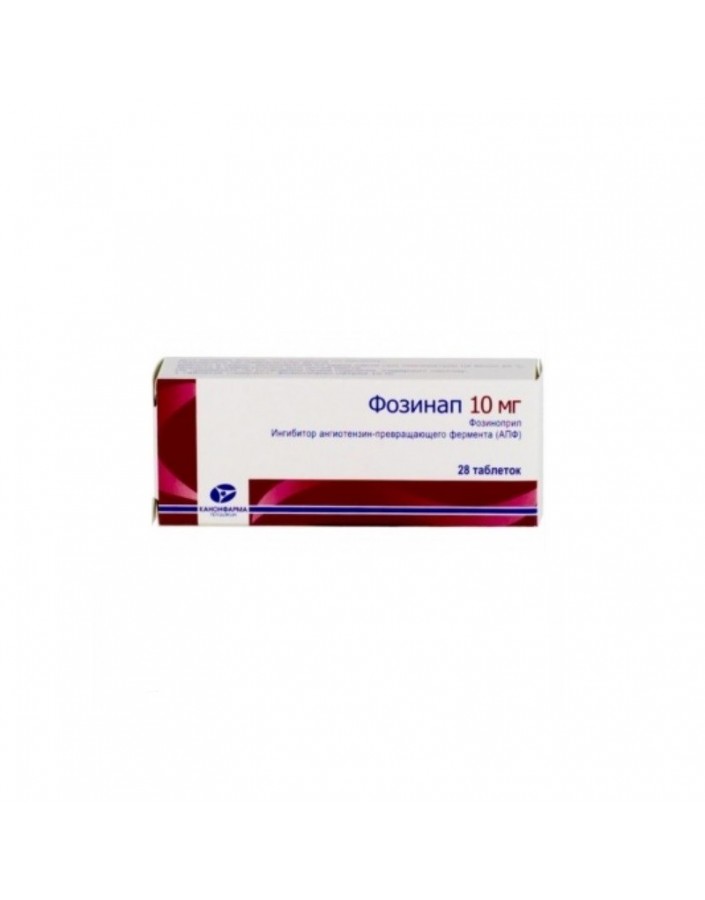 ACE inhibitor. It has a hypotensive, vasodilating, diuretic and potassium-sparing effect. Fosinopril prevents the conversion of angiotensin I to the angiotensin II vasoconstrictor, as a result of which vasopressor activity and aldosterone secretion decrease, which can lead to a slight increase in the content of potassium ions in the blood serum with simultaneous loss of sodium and fluid by the body. As a result, OPSS and systemic blood pressure are reduced. Suppresses the synthesis of aldosterone, inhibits tissue ACE. Fosinopril inhibits the metabolic degradation of bradykinin, which has a powerful vasopressor effect; due to this, the antihypertensive effect of the drug may increase.

Reduction of blood pressure is not accompanied by a change in the bcc, cerebral and renal blood flow, blood supply to the internal organs, skeletal muscles, skin, and myocardial reflex activity. In case of arterial hypertension and left ventricular hypertrophy, treatment leads to a decrease in the mass of the left ventricle and a decrease in the thickness of the interventricular septum. Long-term therapy does not lead to metabolic disorders.After ingestion, the hypotensive effect develops within 1 hour, reaches a maximum after 3–6 hours and persists for 24 hours.

In chronic heart failure, the positive effects of fosinopril are mainly achieved by suppressing the activity of the renin-aldosterone system. Inhibition of ACE leads to a decrease in both preload and afterload on the myocardium. Fosinopril helps to increase exercise tolerance, reduce the severity of chronic heart failure.

After ingestion, absorption from the gastrointestinal tract is about 30–40%. The degree of absorption does not depend on food intake, but the rate of absorption can be slowed down.

Fosinopril metabolism under the action of enzymes with the formation of fosinoprilat occurs mainly in the liver and gastrointestinal mucosa.

Tmax in blood plasma - 3 hours and does not depend on the dose taken.

Communication with plasma proteins - more than 95%. Fozinoprilat has a relatively small Vd and is slightly associated with cellular components of the blood. Does not penetrate the BBB.

Fosinopril is eliminated from the body equally by the kidneys and through the liver. In hypertension in patients with normal kidney function and liver T1/2 Fosinoprilata is about 11.5 hours. With chronic heart failure T1/2 is 14 hours

arterial hypertension (monotherapy or as part of combination therapy);

hypersensitivity to fosinopril or other components of the drug;

angioedema with the use of other ACE inhibitors (in history);

Fosinap is contraindicated for use in pregnancy. The use of the drug in the II and III trimesters of pregnancy causes damage or death of the developing fetus. For newborns whose mothers took ACE inhibitors during pregnancy, it is recommended to conduct careful monitoring for the timely detection of arterial hypotension, oliguria and hyperkalemia. Since fosinoprilat is excreted in breast milk, if you need to use the drug during lactation, breastfeeding should be stopped.

From the side of blood-forming organs: lymphadenitis.

Effect on the fetus and newborns: impaired development of the kidneys of the fetus, reduction of fetal and newborn blood pressure, impaired renal function, hyperkalemia, hypoplasia of the cranial bones, oligohydramnios, contractures of the extremities, lung hypoplasia.

The simultaneous use of antacids (including aluminum and Magnesium hydroxide) can reduce the absorption of fosinopril (fosinopril and these funds should be taken at least 2 hours apart).

When prescribing fosinopril, it should be borne in mind that Indomethacin and other NSAIDs (including Acetylsalicylic acid in a dose exceeding 3 g, and COX-2 inhibitors) can reduce the antihypertensive effect of ACE inhibitors, especially in patients with low-root hypertension.

With the combined use of fosinopril with diuretics or in combination with a strict diet limiting sodium intake or with hemodialysis, severe arterial hypotension may develop, especially in the 1st hour after taking the fosinopril initial dose.

Fosinopril enhances the hypoglycemic effect of sulfonylurea and insulin derivatives.

With simultaneous use with Allopurinol, cytotoxic drugs, immunosuppressants, procainamide increases the risk of leukopenia.

Estrogens weaken the hypotensive effect of fosinopril (due to its ability to retain fluid).

The bioavailability of fosinopril with simultaneous use with chlorthalidone, Nifedipine, propranolol, hydrochlorothiazide, cimetidine, Metoclopramide, propanthelin bromide, Digoxin, acetylsalicylic acid and Warfarin does not change.

Inside irrespective of meal, without chewing, washing down with a small amount of liquid. Dose set individually.

With hypertension: The recommended starting dose is 10 mg / day. The dose should be selected depending on the dynamics of lowering blood pressure. Doses range from 10 to 40 mg / day. The maximum dose is 40 mg / day.

Patients with impaired renal and / or liver function, as well as elderly patients: correction of the dosing regimen is not required.

Treatment: taking the drug should be stopped, gastric lavage, taking of sorbents (for example, activated carbon), vasopressor agents, infusion of 0.9% sodium chloride solution and further symptomatic and supportive treatment are indicated. The use of hemodialysis is ineffective.

Before starting treatment, it is necessary to analyze the previously conducted antihypertensive therapy, the degree of increase in blood pressure, dietary restrictions on salt and / or fluids, and other clinical situations.

If possible, antihypertensive treatment should be discontinued earlier a few days before the start of treatment with Fosinap.

To reduce the likelihood of arterial hypotension, diuretics should be canceled 2-3 days before the start of treatment with Fosinap.

Before and during treatment with Fosinap, it is necessary to control blood pressure, kidney function, the content of potassium ions, creatinine, urea, electrolyte concentrations and activity of hepatic transaminases in the blood.

It was reported on the development of angioedema in patients with fosinopril. With pervasive edema of the tongue, pharynx, or larynx, an airway obstruction may develop with possible fatal outcome. In case of development of such reactions, it is necessary to stop taking the drug and take emergency treatment measures, including subcutaneously inject the solution of epinephrine (adrenaline) (1: 1000).

During therapy with ACE inhibitors, Anaphylactic reactions may develop during hemodialysis through high-flow membranes, as well as during plasma exchange of LDL with adsorption on dextran sulfate. In such cases, the use of another type of dialysis membrane or other drug treatment should be considered.

Perhaps the development of agranulocytosis and suppression of bone marrow function during treatment with ACE inhibitors. These cases are more common in patients with impaired renal function, especially in the presence of systemic connective tissue diseases (including systemic lupus erythematosus or scleroderma). Before starting therapy with ACE inhibitors and in the process of treatment, the total number of leukocytes and leukocyte formula are monitored (1 time per month for the first 3–6 months of treatment and for the first year of use of the drug in patients with an increased risk of neutropenia).

Symptomatic arterial hypotension during the use of ACE inhibitors most often develops in patients after intensive treatment with diuretics, a diet restricting the intake of salt, or during kidney dialysis. Transient arterial hypotension is not a contraindication for further use of the drug.

In patients with arterial hypertension with bilateral renal artery stenosis or arterial stenosis of a single kidney, as well as the simultaneous use of diuretics in patients with unchanged kidney function during treatment with ACE inhibitors, the concentration of urea nitrogen and serum creatinine may increase. If these effects do not disappear after discontinuation of treatment, then it is necessary to reduce the dose of the drug Fosinap and / or diuretic.

In some cases, in patients with severe chronic heart failure, treatment with ACE inhibitors can cause a more pronounced antihypertensive effect, which can lead to oliguria or azotemia with a fatal outcome.Therefore, in the treatment of chronic heart failure with Fosinap, patient monitoring is necessary, especially during the first 2 weeks of treatment, as well as with any increase in the dose of Fosinap or diuretic.

With the appearance of noticeable jaundice and a pronounced increase in the activity of hepatic transaminases, therapy with Fosinap should be stopped and appropriate treatment should be prescribed.

ACE inhibitors can enhance the hypotensive effect of agents used for general anesthesia. Before surgery (including dentistry), an anesthesiologist should be warned about the use of ACE inhibitors. Caution must be exercised when performing physical exercises or in hot weather (due to the risk of dehydration and arterial hypotension due to a decrease in the BCC).

Influence on ability to drive vehicles and work with mechanisms. Care must be taken when driving or doing other work that requires increased attention, because dizziness may develop, especially after taking the initial dose of the drug Fosinap.