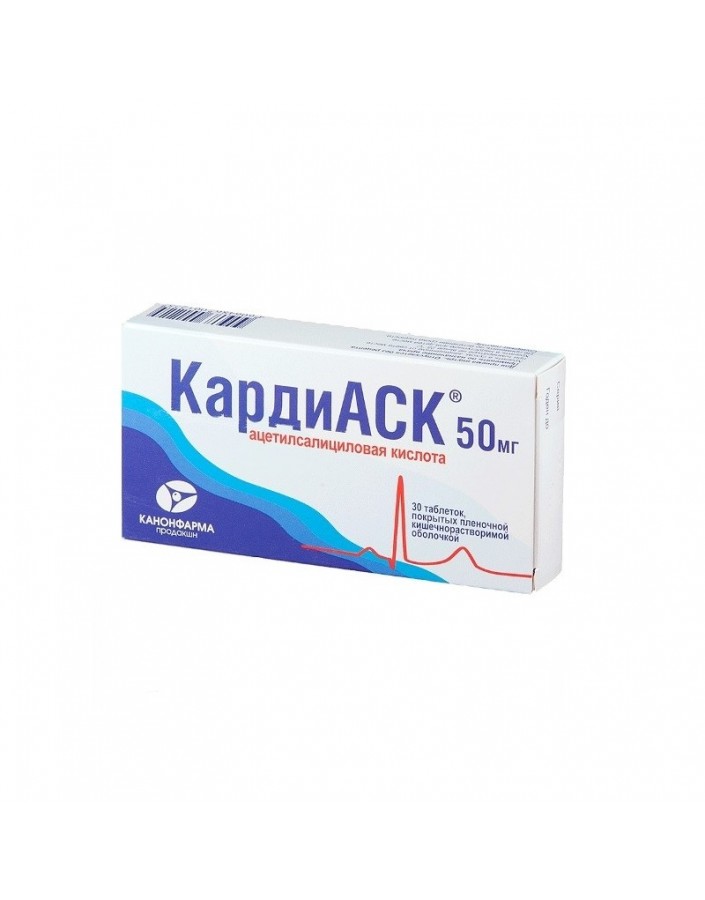 white color, round, biconvex, with a smooth shiny surface, light roughness is allowed.

- NSAID antiagregant. The main mechanism of action of the drug CardiAc is irreversible inactivation of the enzyme cyclooxygenase (COX-1), as a result of which the synthesis of thromboxane A2 is blocked and platelet aggregation is inhibited. CardiASK also has anti-inflammatory, antipyretic and analgesic effects.

WITH caution: prescribed for gout, hyperuricemia, as well as patients with a history of indications of ulcerative lesions of the gastrointestinal tract or Gastrointestinal bleeding, bronchial asthma, chronic diseases of the respiratory system, hay fever, polyposis of the nasal mucosa, allergic reactions to drugs, when used together with methotrexate in doses of less than 15 mg per week, with a deficiency of vitamin K and glucose-6-phosphate dehydrogenase.

CardiASK should be taken orally, before meals with plenty of fluids.
CardiASK is designed for long-term use. The duration of therapy is determined by the attending physician.

Allergic reactions: urticaria, angioedema.
From the digestive tract: nausea, heartburn, vomiting, pain in the abdomen, ulcers of the mucous membrane of the stomach and duodenum, including perforative, gastrointestinal bleeding, increased activity of "liver" enzymes.
On the part of the respiratory system: bronchospasm.
On the part of the immune system: anaphylactic reactions.
From the hemopoietic system: anemia (rare), increased bleeding.
From the side of the central nervous system: dizziness, tinnitus.

When combined, CardiASK enhances the effects of methotrexate by reducing its renal clearance and displacement of plasma blood proteins.
With simultaneous use CardiASK enhances the effect of Heparin and indirect anticoagulants due to dysfunction of platelets and the displacement of indirect anticoagulants from bonds with plasma proteins.
CardiASK with combined use enhances the action of thrombolytic and antiplatelet drugs (including ticlopidine).
CardiASK increases the concentration of Digoxin in the blood plasma by reducing renal excretion and enhances its effects.
CardiASK enhances the action of hypoglycemic drugs (insulin and sulfonylurea derivatives) due to the hypoglycemic effect of acetylsalicylic acid (in high doses) and the removal of sulfonylurea derivatives from the association with plasma proteins.
CardiASK enhances the action of valproic acid by displacing the latter from binding to plasma proteins.
When combined, CardiASK reduces the effect of uricosuric drugs (benzbromarone) due to competitive tubular elimination of uric acid.
With simultaneous use of GCS enhance the excretion of salicylates and weakens their effect.
When used simultaneously with ethanol, an additive effect is noted.

The use of the drug CardiAAS can provoke bronchospasm and attacks of bronchial asthma and other hypersensitivity reactions. Risk factors include a history of bronchial asthma, hay fever, polyposis of the nasal mucosa, chronic diseases of the respiratory tract, allergic reactions to other drugs (including skin reactions, itching, urticaria).
The drug can cause bleeding of varying severity during and after surgery.
Combined use of CardiASK with anticoagulants, thrombolytics, antiplatelet drugs is associated with an increased risk of bleeding.
Low-dose cardiAASK can trigger the development of gout in susceptible patients (with reduced uric acid excretion).
The combined use of CardiASK and methotrexate is accompanied by an increased incidence of side effects from the blood-forming organs.
The use of CardiAASK in high doses may have a hypoglycemic effect, which must be considered when prescribing the drug to diabetics who receive hypoglycemic therapy.
With the combined use of GCS and salicylates, it should be remembered that during treatment, the level of salicylates in the blood is reduced, and after GCS is canceled, an overdose of salicylates may develop.
The combined use of CardiASK with Ibuprofen is not recommended.
The use of CardiAASK in high doses is associated with the risk of gastrointestinal bleeding.
When used while taking the drug alcohol increases the risk of damage to the gastrointestinal mucosa and lengthening the bleeding time.

In a dry, dark place at a temperature not higher than 25 ° C. Keep out of reach of children.

- 2 years. Do not use the drug after the expiration date printed on the package.