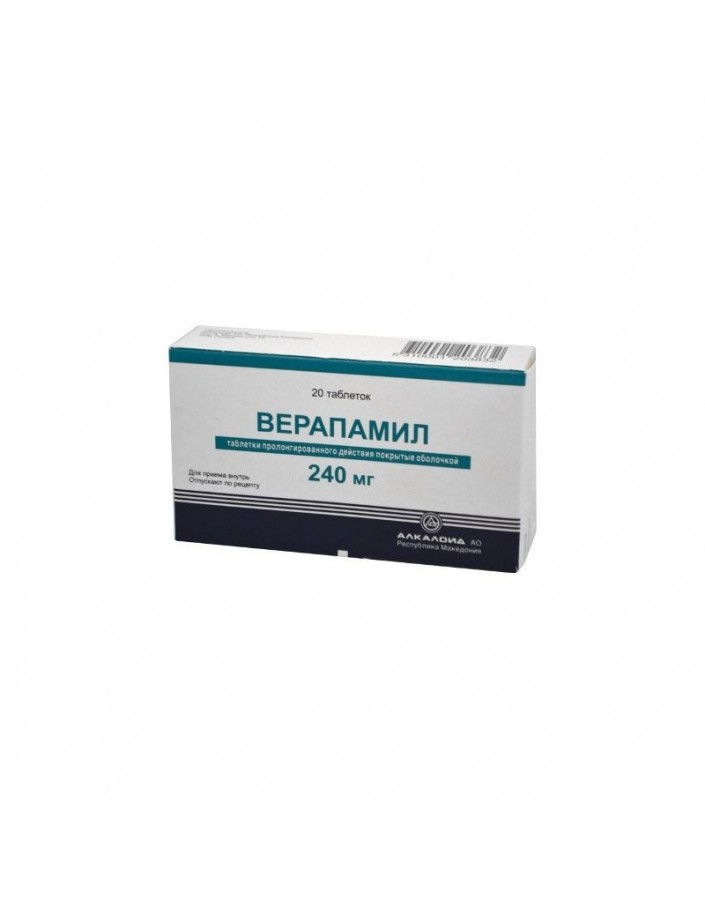 In 1 pill of the prolonged action, coated contains:

In the blister of 10 tablets. In packing 2 blisters.

When ingested, about 90-92% of Verapamil is absorbed in the gastrointestinal tract, however, bioavailability is low and is approximately 20% due to intensive metabolism during the "first pass" through the liver.

Relatively high therapeutic plasma concentrations (51.6 ng / ml) are detected after 24 hours after ingestion. About 90% of the drug is bound to plasma proteins.

The half-life of a single dose is an average of 2.8-7.4 hours; when taking repeated doses - 4.5-12 hours. The elimination half-life from plasma in the elderly is increasing.

Metabolized by the “first pass” through the liver. 12 metabolites detected. The main metabolite is norverapamil, which has pharmacological activity, other metabolites are mostly inactive.

Verapamil is one of the main drugs of the “slow” Calcium channel blocker group.

It has antiarrhythmic, antianginal and antihypertensive activity.

Causes dilatation of the coronary vessels of the heart and increases coronary blood flow; reduces the tone of the smooth muscles of the peripheral arteries and the total peripheral vascular resistance.

Verapamil significantly slows down the atrioventricular (AV) conduction, suppresses the automatism of the sinus node, which allows the use of the drug for the treatment of supraventricular arrhythmias.

Verapamil is the drug of choice for treating angina pectoris of vasospastic genesis (Prinzmetal stenocardia).

It has an effect on exertional angina, as well as in the treatment of angina pectoris with supraventricular rhythm disturbances.

Since the cardiovascular system

From the side of the central nervous system

From the digestive tract

Increased activity of "liver" enzymes, alkaline phosphatase, an increase in the level of prolactin.

It was reported about cases of galactorrhea and impotence, gynecomastia, gum hyperplasia.

With the simultaneous appointment of the drug Verapamil

The prescription of verapamil to patients who receive lithium for a long time increases the risk of a neurotoxic effect of lithium drugs.

Simultaneous use with rifampicin or phenobarbital reduces the effectiveness of verapamil.

Cimetidine enhances the action of verapamil.

Combined use with other antihypertensive drugs, diuretics, vasodilators leads to mutual enhancement of their action.

While taking the drug Verapamil and Digoxin, theophylline, cyclosporine or quinidine, it is possible to increase the blood concentration of the above drugs during therapy with Verapamil.

Lipid-lowering drugs: Atorvastatin (an increase in serum levels of atorvastatin), lovastatin (an increase in serum levels of lovastatin), Simvastatin (an increase of AUC about 2.6 times and a maximum concentration of about 4.6 times simvastatin). Patients receiving verapamil, treatment with HMG-CoA reductase inhibitors should begin with the lowest possible doses, which gradually increase. If it is necessary to prescribe verapamil to patients already receiving HMG-CoA reductase inhibitors, their dose should be reconsidered according to the concentration of cholesterol in the blood serum.

Fluvastatin, pravastatin and Rosuvastatin are not metabolized by the action of CYP3A4 isoenzymes, therefore their interaction with verapamil is less likely.

Grapefruit juice - an increase in AUC and maximum concentration of verapamil.

St. John's wort - decreases the AUC of verapamil with a corresponding decrease in the maximum concentration.

Treatment: with early detection (it must be borne in mind that the active substance is released and absorbed in the intestine within 48 hours after taking the drug inside) - gastric lavage is recommended in all cases, if at least 12 hours have passed since taking the drug, and also later terms with reduced GI motility (lack of intestinal noise during auscultation). The treatment is symptomatic and depends on the clinical picture of the overdose. Calcium is a specific antidote: 10-30 ml of 10% solution of Calcium gluconate is administered as an intravenous injection (2.25-4.5 mmol), if necessary, re-administered or as a slow drip infusion (for example, 5 mmol / hour). In the case of atrioventricular block II or III, sinus bradycardia, cardiac arrest: atropine, isoprenaline, ortsiprenalin or stimulation of the heart. In case of arterial hypotension: dopamine, dobutamine, norepinephrine (norepinephrine). Hemodialysis is not effective.

To accept during food or right after food, washing down with a small amount of water. Tablets do not chew. Doses of the drug are selected individually.

In patients with arterial hypertension, the dose of the drug varies from 240 mg to 360 mg. In the case of patients who show a slow reduction in blood pressure, treatment should be started with a long-acting Ug pill in the morning.

The maximum daily dose of 360 mp The increase in the daily dose to 480 mg should be carried out only in the hospital.

Usually, prolonged-acting verapamil is prescribed in an average daily dose of 240 mg (1 tablet) 1 time a day in the morning, if necessary 240 mg in the morning and 120 mg (½ tablet) in the evening at 12-hour intervals. Lower initial doses of 120 mg are prescribed to patients with impaired liver and kidney function, elderly patients.

At the beginning of treatment, the drug is prescribed at 120 mg with a dose rate of 1-2 times per day with an interval of 12 hours. The maximum daily dose of 240 mg.

The average single dose is 120 mg with a frequency rate of 1-2 times a day.

In patients with impaired liver function

The effect of verapamil increases and becomes longer (as a result of a slower metabolism of the drug, which depends on the severity of liver dysfunction). In such cases, you should set the dose carefully and start treatment with lower doses of verapamil, using verapamil in other dosage forms (40 mg tablets).

Influence on ability to drive and work with mechanisms

Depending on the individual response to treatment, the patient's ability to drive or work with mechanisms may be reduced, which is especially important at the beginning of therapy.