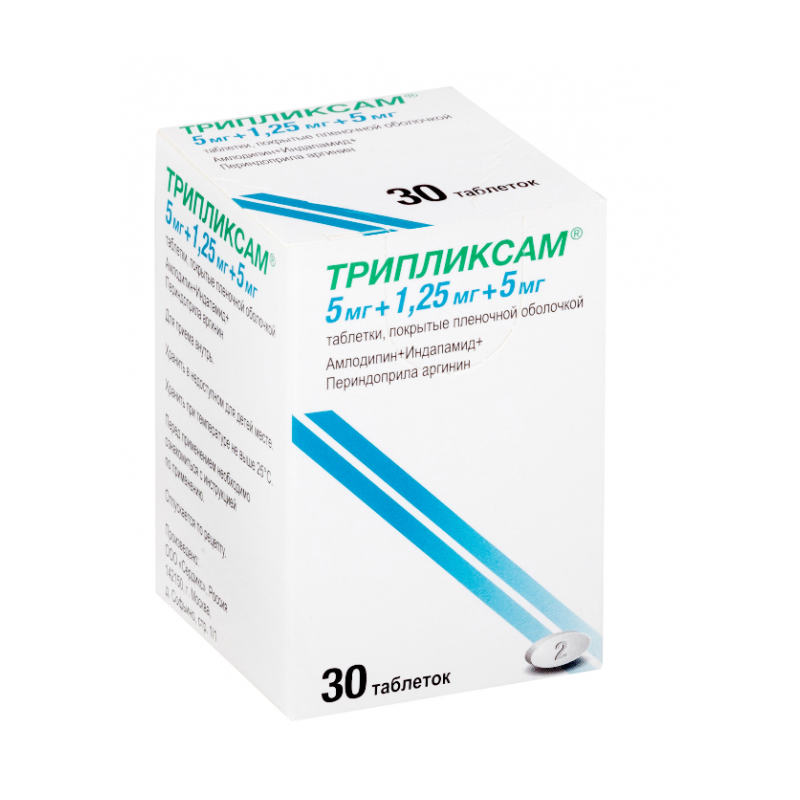 Triplixam ® is indicated for the treatment of arterial hypertension in patients who need treatment with perindopril, indapamide and amlodipine in a dose that is available in a fixed combination.

Use for patients on hemodialysis;

use in patients with untreated decompensated heart failure,

Hypersensitivity to the active substances, other sulfonamide preparations, dihydropyridine derivatives, any other ACE inhibitor, or to any excipients listed in the “Composition” section;

pregnant women or women planning to become pregnant (see section “Use during pregnancy or lactation”);

breastfeeding period (see the section “Use during pregnancy or lactation”);

obstruction of exit from the left ventricle (for example, severe aortic stenosis);

simultaneous use with preparations containing the active ingredient aliskiren, in patients with diabetes mellitus or renal insufficiency (glomerular filtration rate <60 ml / min / 1.73 m 2) (see section "Interaction with other drugs and other types of interactions").

1 pill Tripliksam ® once a day, preferably in the morning before meals.

The use of a fixed combination is not intended for initial therapy.

If necessary, the dose of the fixed combination Triplixam ® can be changed or the individual selection of doses can be recommended separately for each component.

On the part of the ear and the labyrinth of the ear. Tinnitus: perindopril - often amlodipine - infrequently.

There are no data on drug overdose Triplixam ®.

For the combination of perindopril / indapamide, frequent undesirable reactions in overdose are hypotension, which can sometimes be accompanied by nausea, vomiting, cramps, dizziness, drowsiness, confusion, oliguria, which can progress to anuria (due to hypovolemia). Disorders of water and electrolyte balance (decrease in the level of potassium and sodium in the blood plasma) may occur.

First aid measures include the rapid elimination of the drug from the body: gastric lavage and / or the appointment of activated charcoal, and then the restoration of water and electrolyte balance in the hospital, until these figures return to normal.

In the event of significant hypotension, the patient should be given a horizontal position with a low head. If necessary, isotonic solution is administered intravenously or any other method of blood volume recovery is used.

Perindopril, the active form of perindopril, can be removed from the body through hemodialysis (see the Pharmacokinetics section).

Data on a conscious overdose of amlodipine are limited.

According to available data, it can be assumed that taking very large doses will lead to excessive peripheral vasodilation and reflex tachycardia. It was reported about the expressed, probably long-term systemic hypothesis and shock with a fatal outcome.

Clinically pronounced hypotension caused by an overdose of amlodipine requires active cardiovascular care, in particular, frequent monitoring of heart function and respiratory function, elevation of the extremities, as well as monitoring of circulating blood volume and urination.

Appointment of a vasoconstrictor may be useful to restore vascular tone and blood pressure, if there are no contraindications. The introduction of Calcium gluconate can help eliminate the effects of calcium channel blockade.

In some cases, gastric lavage is advisable. A study with healthy volunteers showed that as a result of the use of Activated carbon 2:00 after taking 10 mg of amlodipine, the rate of absorption of amlodipine in the body decreases. Since amlodipine has a high level of binding to blood proteins, hemodialysis is considered ineffective.

Perindopril. The use of ACE inhibitors is contraindicated in pregnancy. Epidemiological data on the risk of a teratogenic effect due to the use of ACE inhibitors during the first trimester of pregnancy are inconclusive, so a slight increase in risk cannot be ruled out. The drug should not be used by pregnant women or women who are planning to become pregnant. If pregnancy is confirmed during drug treatment, its use must be immediately discontinued and replaced with another drug approved for use in pregnant women.