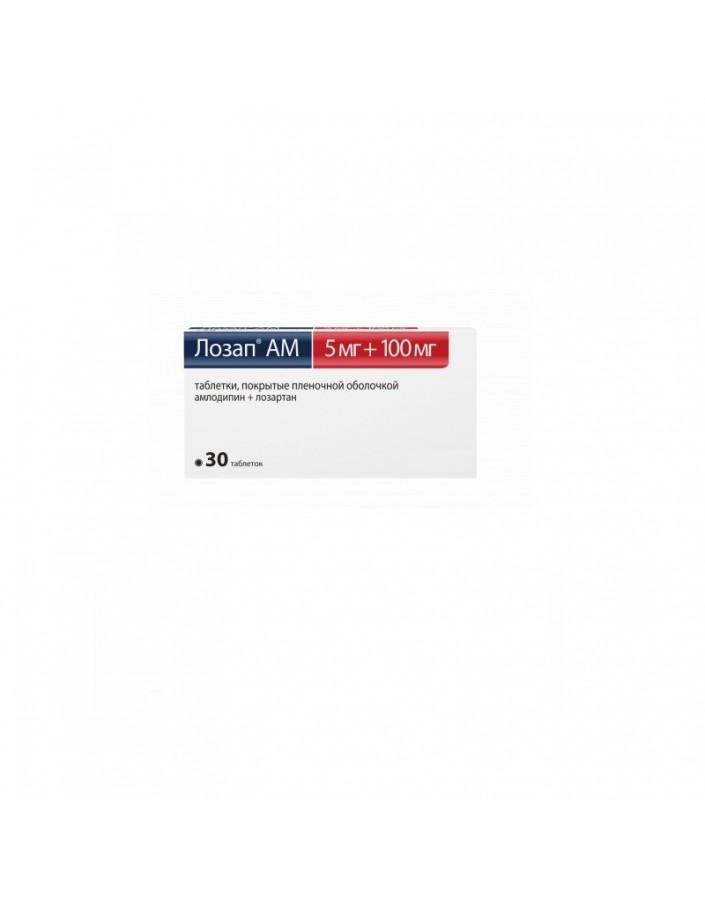 Tablets 5 mg + 50 mg: white or almost white, oblong, biconvex, film-coated, with the engraving “AT1” on one side.

The results of two bioequivalence studies involving healthy volunteers showed that Lozap® AM in doses of 5 + 50 mg and 5 + 100 mg of bioequivalent to the combined use of the corresponding doses of amlodipine camsylate and losartan potassium in the form of separate tablets.

The bioequivalence of amlodipine besylate and amlodipine camsilate was evaluated in a randomized blind crossover comparative study involving healthy volunteers.

Drug lozap® AM The composition of the drug Lozap® AM includes 2 active ingredients with a complementary mechanism of action to improve blood pressure control in patients with arterial hypertension (AH): losartan potassium, an angiotensin II receptor antagonist (ARA II), and amlodipine (BPC). Losartan blocks the vasoconstrictor effect of angiotensin II and the stimulation by the latter of the release of aldosterone by selectively inhibiting the binding of angiotensin II to the AT receptors1 in many tissues. Amlodipine is a peripheral arterial vasodilator that acts directly on vascular smooth muscle, which leads to a decrease in peripheral vascular resistance and a decrease in blood pressure.

Losartan. Angiotensin II is a powerful vasoconstrictor, the main active hormone RAAS, as well as the crucial pathophysiological link in the development of hypertension. Angiotensin II binds to AT1-receptors located in many tissues (vascular smooth muscle tissue, adrenal glands, kidneys and heart), and performs several important biological functions, including vasoconstriction and the release of aldosterone. In addition, angiotensin II stimulates the growth of smooth muscle cells. AT2-receptors - the second type of receptor, which binds to angiotensin II, but its role in regulating the function of the CAS is unknown. Losartan is a selective antagonist of APA II (AT1-receptors), highly effective by ingestion. Losartan and its pharmacologically active carboxylated metabolite (E-3174) as in vitroso and in vivo block all the physiological effects of angiotensin II, regardless of its source or route of synthesis. Unlike some peptide APA II, losartan does not possess agonist properties. Losartan binds selectively to AT1-receptors and does not bind and does not block the receptors of other hormones and ion channels, which play an important role in regulating the function of the CAS. In addition, losartan does not inhibit ACE (kininase II), which is responsible for the destruction of bradykinin.

Consequently, effects not directly related to the blockade of AT1-receptors, such as enhancing bradykinin-mediated effects or the development of edema (losartan 1.7%, placebo 1.9%), are not related to the effect of losartan.

In vitro a negative inotropic effect can be detected, however, in studies on intact animals with the use of amlodipine in therapeutic doses, this effect has not been identified.

Amlodipine does not affect the serum calcium level. Within the physiological pH range, amlodipine is an ionized compound (pKa = 8.6), and its kinetic interaction with the calcium channel receptor is characterized by gradual association and dissociation with the receptor binding site, which leads to the gradual development of the effect.

Drug lozap® AM It is shown that the drug Lozap® AM effectively lowers blood pressure. Both losartan and amlodipine reduce blood pressure by reducing peripheral resistance. Blocking the entry of calcium into the cell and reducing the vasoconstrictor effect caused by exposure to angiotensin II are complementary mechanisms.

Losartan. Losartan suppresses the increase in blood pressure and dad with the infusion of angiotensin II. At the time of reaching Cmax losartan in the blood plasma after taking losartan at a dose of 100 mg, the above effect of angiotensin II is suppressed by approximately 85%, and 24 hours after single and multiple doses, by 26-39%.

In a study with a single dose of losartan at a dose of 100 mg, which included healthy volunteers (men), taking the drug orally under conditions of high and low salt diet did not affect the GFR, the effective renal plasma flow and the filtration fraction. Losartan had a natriuretic effect, which was more pronounced on a low-salt diet and was apparently not associated with the suppression of early sodium reabsorption in proximal renal tubules. Losartan also caused a transient increase in uric acid excretion by the kidneys.

In patients with hypertension, proteinuria (at least 2 g / 24 h), without diabetes mellitus and taking losartan for 8 weeks at a dose of 50 mg with a gradual increase to 100 mg, a significant decrease in proteinuria (by 42%) and fractional excretion of albumin were observed and IgG. In these patients, losartan stabilized GFR and reduced the filtration fraction.

In postmenopausal women with hypertension who took losartan at a dose of 50 mg for 4 weeks, no effect of therapy on the renal and systemic GH levels was detected.

Losartan does not affect vegetative reflexes and does not have a lasting effect on the concentration of norepinephrine in the blood plasma.

In patients with hypertension, losartan in doses up to 150 mg / day did not cause clinically significant changes in the concentration of triglycerides on an empty stomach, total HD and HDL. In the same doses, losartan did not affect the fasting blood glucose concentration.

In general, losartan caused a decrease in serum uric acid concentration (usually less than 0.4 mg / dL), which was maintained during long-term treatment. In controlled clinical trials involving patients with hypertension, there have been no cases of drug withdrawal due to an increase in creatinine concentration or serum potassium content.

In a 12-week parallel study that included patients with left ventricular failure (functional class II-IV NYHA), most of which took diuretics and / or cardiac glycosides, compared the effects of losartan in doses of 2.5; ten; 25 and 50 mg / day with placebo. At doses of 25 and 50 mg / day, the drug showed positive hemodynamic and neurohormonal effects that persisted throughout the study. Hemodynamic effects included an increase in cardiac index and a decrease in wedging pressure in the pulmonary capillaries, as well as a decrease in OPS, mean systemic blood pressure and heart rate. The frequency of arterial hypotension in these patients depended on the dose of the drug. Neurohormonal effects included a decrease in the concentration of aldosterone and noradrenaline in the blood.

In patients with hypertension and normal renal function, taking therapeutic doses of amlodipine led to a decrease in renal vascular resistance, increased GFR and effective renal plasma flow without changing the filtration fraction or proteinuria.

As with other BPCs, hemodynamic parameters of heart function at rest and under load (or cardiac pacing) in patients with normal ventricular function who took amlodipine generally showed a slight increase in cardiac index without a significant change in the rate of increase in pressure in the left ventricular cavity at the beginning of the period expulsion (dP / dt) of either the final dad or volume of the left ventricle. In hemodynamic assessment studies, amlodipine did not have a negative inotropic effect when used in therapeutic doses in healthy volunteers, even when used simultaneously with beta-blockers. However, similar results were observed in healthy volunteers or patients with heart failure in the compensation stage with the use of drugs that have a pronounced negative inotropic effect.

Electrophysiological effects. Amlodipine did not affect the sinoatrial node function or AV conductivity in healthy volunteers. In patients with chronic stable angina pectoris, injecting 10 mg of amlodipine did not significantly affect the A – H and H – V conductivity and the recovery time of the sinus node after cardiostimulation. Similar results were obtained in patients simultaneously taking amlodipine and beta-blockers. In clinical studies in which patients with hypertension or angina pectoris took amlodipine at the same time as beta-blockers, no adverse effect on ECG parameters was observed.In clinical trials involving patients with only angina pectoris, amlodipine therapy did not affect ECG intervals and did not cause AV blockade to a greater degree.

Losartan. When ingested, losartan is well absorbed and metabolized during the initial passage through the liver to form an active carboxylated metabolite and inactive metabolites. The systemic bioavailability of losartan in tablet form is about 33%. Medium Cmax losartan and its active metabolite are reached after 1 and 3-4 h, respectively.

Amlodipine. Studies have shown that in patients with hypertension, approximately 93% of the circulating drug binds to plasma proteins .

Losartan. Losartan and its active metabolite are not less than 99% bound to plasma proteins (mainly albumin). Vd Losartan is 34 liters. Studies in rats have shown that losartan hardly penetrates the BBB.

In addition to the active metabolite, biologically inactive metabolites are formed, including 2 main, resulting from the hydroxylation of the side butyl chain, and one minor - N-2-tetrazole-glucuronide.

Amlodipine. Amlodipine elimination from blood plasma occurs in 2 phases, the final phase T1/2 is about 30-50 h. Css amlodipine in plasma is reached after 7-8 days with daily intake.

Elimination of losartan and its metabolites is carried out by the kidneys and through the intestines with bile. After ingestion 14With losartan, about 35% of radioactivity in men is found in urine and 58% in feces. After the / in the introduction 14With losartan in men, approximately 43% of the radioactivity is found in the urine and 50% in the feces.

Drug lozap® AM has not been studied in any special groups of patients due to a good knowledge of the active ingredients of the drug, losartan and amlodipine. Losartan should be used with caution in violation of the kidneys and liver. It is contraindicated during pregnancy and during breastfeeding. No separate studies have been conducted with pediatric and elderly patients. Amlodipine should be used with caution when liver dysfunction.

It is contraindicated for unstable cardiovascular disease, as well as during pregnancy and during breastfeeding.

Children and teenagers. Pharmacokinetic studies involving patients with hypertension aged 6 to 17 years who took amlodipine in a dose of 1.25 to 20 mg showed that body weight and V clearance were adjustedd amlodipine were comparable to those in adult patients.

Liver dysfunction. When losartan was taken orally by patients with mild and moderate alcoholic cirrhosis of the liver, the concentrations of losartan and its active metabolite in the blood plasma were 5 and 1.7 times higher, respectively, than in young healthy male volunteers.

Arterial hypertension (for patients who are recommended combination therapy).