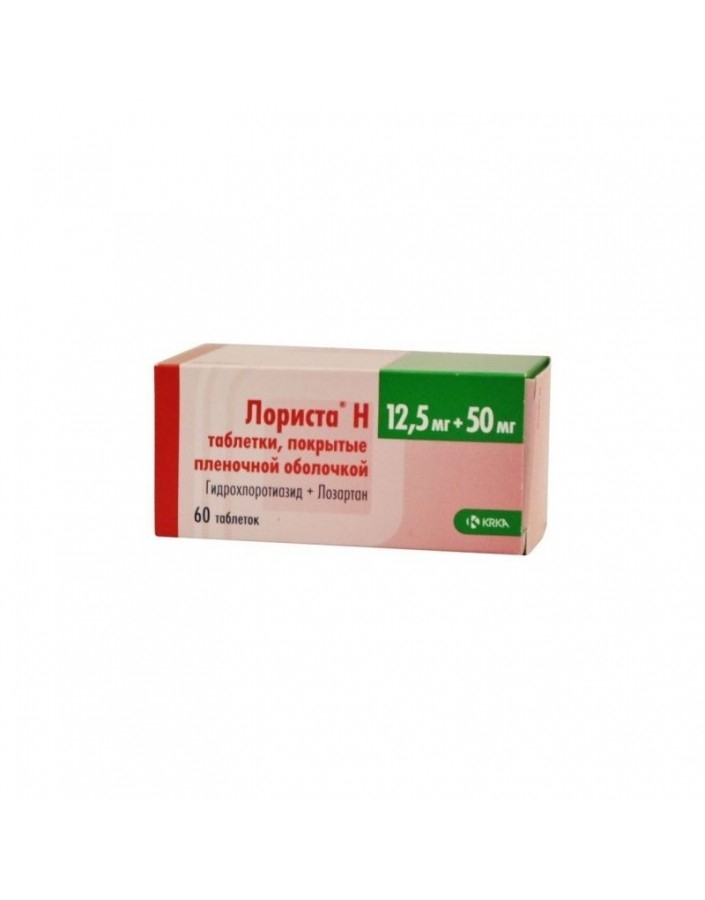 Lorista H - combination drug; has a hypotensive effect. Losartan is a selective antagonist of angiotensin II receptors (type AT1) for oral administration, non-protein nature. In vivo and in vitro losartan and its biologically active carboxyl metabolite (EXP-3174) block all physiologically significant effects of angiotensin II on AT1 receptors, regardless of the route of its synthesis: leads to an increase in plasma renin activity, decreases plasma aldosterone concentration, etc. Losartan indirectly induces activation of the AT2 receptor by increasing the level of angiotensin II. Losartan does not inhibit the activity of kininase II, an enzyme that is involved in the metabolism of bradykinin. Reduces total peripheral vascular resistance (OPSS), pressure in the "small" circle of blood circulation; reduces afterload, has a diuretic effect. Interferes with the development of myocardial hypertrophy, increases exercise tolerance in patients with chronic heart failure (CHF). Taking losartan once a day results in a statistically significant reduction in systolic and diastolic blood pressure (BP). Losartan evenly controls the pressure throughout the day, with the antihypertensive effect consistent with the natural circadian rhythm. The decrease in blood pressure (BP) at the end of the dose of the drug was approximately 70-80% of the effect at the peak of the drug, 5-6 hours after administration. "Cancellation" syndrome is not observed; Also, losartan does not have a clinically significant effect on heart rate (HR). Losartan is effective in men and women, as well as in the elderly (and> 65 years) and younger patients (and <65 years). Hydrochlorothiazide.Thiazide diuretic, the diuretic effect of which is associated with impaired reabsorption of sodium, chlorine, potassium, Magnesium ions, and water in the distal nephron; delays the excretion of Calcium ions, uric acid. It has antihypertensive properties; hypotensive effect develops due to the expansion of arterioles. Virtually no effect on normal blood pressure (BP). The diuretic effect occurs after 1-2 hours, reaches a maximum after 4 hours and lasts 6-12 hours. The antihypertensive effect occurs after 3-4 days, but it may take 3-4 weeks to achieve the optimal therapeutic effect.

Data on the use of losartan during pregnancy is not. Renal perfusion of the fetus, which depends on the development of the renin-angiotensin system, begins to function in the third trimester of pregnancy. The risk to the fetus increases when taking losartan in the second and third trimesters. At establishment of pregnancy therapy Loristoy ND has to be immediately stopped. If necessary, the appointment of the drug in the period of lactation is necessary to stop breastfeeding.

Inside, regardless of the meal.
LORISTA H can be combined with other antihypertensive drugs.
Arterial hypertension. Initial and maintenance dose - 1 table. Lorista H (50 / 12.5 mg) 1 time per day.The maximum antihypertensive effect is achieved within 3 weeks of therapy. To achieve a more pronounced effect, it is possible to increase the dose of the drug to 2 table. Lorista H (50 / 12.5 mg) 1 time per day. The maximum daily dose - 2 tablets. drug Lorista H.
In patients with reduced BCC (for example, when receiving large doses of diuretics), the recommended initial dose of losartan in patients with hypovolemia is 25 mg 1 time per day. In this regard, the treatment of Lorista H should begin after the abolition of diuretics and the correction of hypovolemia.
In elderly patients and patients with moderate renal insufficiency, including those on dialysis, no adjustment of the initial dose is required.
Reducing the risk of cardiovascular morbidity and mortality in patients with arterial hypertension and left ventricular hypertrophy. The standard initial dose of losartan is 50 mg 1 time per day.

Losartan In clinical studies, pharmacokinetic interactions revealed no clinically significant drug interactions with hydrochlorothiazide, Digoxin, Warfarin, cimetidine, phenobarbital, Ketoconazole, and Erythromycin . Rifampicin and Fluconazole reduce the level of the active metabolite (this interaction has not been studied clinically). The combination of losartan with potassium-sparing diuretics (spironolactone, triamterene, amiloride), potassium-sparing additives or potassium salts can lead to hyperkalemia. NSAIDs, including selective cyclooxygenase-2 inhibitors, may reduce the effect of diuretics and other antihypertensive drugs, including losartan. In patients with impaired renal function who received NSAID therapy (including cyclooxygenase-2 inhibitors), treatment with angiotensin II receptor antagonists can lead to a further deterioration in renal function, including acute renal failure, which is usually reversible. The hypotensive effect of losartan, like other antihypertensive drugs, can be reduced by taking Indomethacin .

Hydrochlorothiazide With thiazide diuretics, drugs such as ethanol, barbiturates and narcotic drugs can potentiate the risk of developing orthostatic hypotension. Hypoglycemic agents (for oral administration and insulin) - may require dose adjustment of hypoglycemic agents. Other antihypertensives - additive effect. Kolestiramin and colestipol - in the presence of anionic exchange resins the absorption of hydrochlorothiazide is disturbed. Corticosteroids, ACTH (adrenocorticotropic hormone) - a pronounced decrease in electrolyte levels, in particular hypokalemia. Pressory amines (for example, epinephrine, norepinephrine) - reducing the severity of the response to receiving pressor amines. Muscle relaxants of non-depolarizing type of action (for example, tubocurarine) - increased effect of muscle relaxants. Lithium - diuretics reduce the renal clearance of lithium and increase the risk of developing the toxic effect of lithium; simultaneous use is not recommended. NSAIDs (including cyclooxygenase-2 inhibitors) - can reduce the diuretic, natriuretic and hypotensive effects of diuretics. Due to the effect on calcium metabolism, their intake may distort the results of the study of the function of the parathyroid glands.

Hydrochlorothiazide
Symptoms: the most frequent symptoms are due to electrolyte deficiency (hypokalemia, hypochloremia, hyponatremia) and dehydration due to excessive diuresis. With simultaneous intake of cardiac glycosides, hypokalemia can aggravate the course of arrhythmias.
Treatment: symptomatic.

Store in a dry place at a temperature not exceeding 30 ° C.