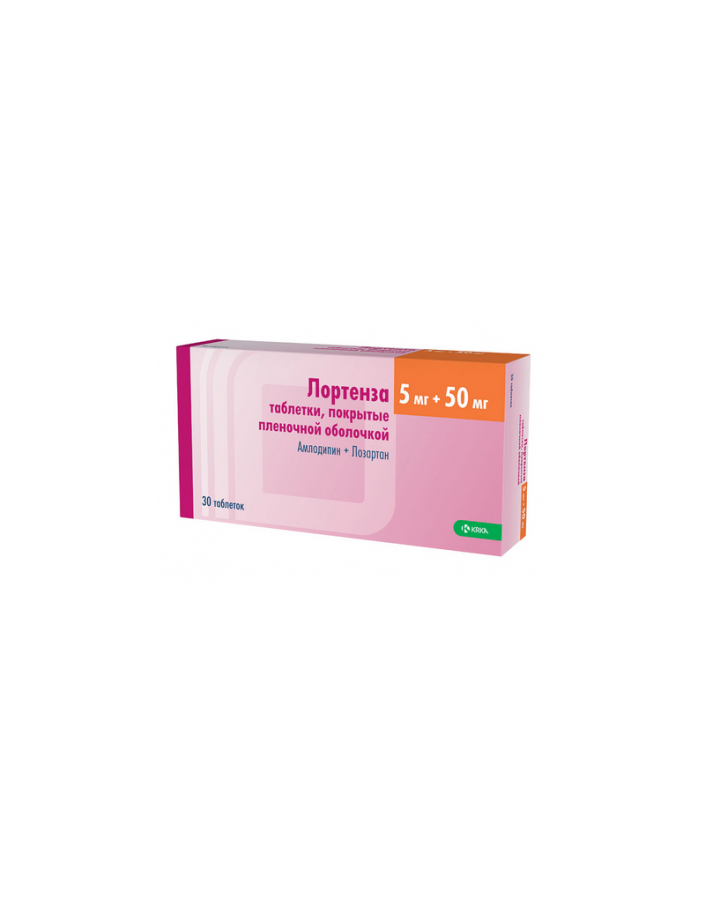 Kind of pills on a break for all dosages: a rough mass of two

Lortenza is a combination of two active ingredients with an antihypertensive effect that complements each other: amlodipine (a “slow” calcium channel blocker) and losartan (an antagonist of angiotensin II receptors

(ARA II)). The active ingredients of the drug have a different mechanism of antihypertensive action: amlodipine causes vasodilation, reducing total peripheral vascular resistance (OPSS), losartan, affects the renin-angiotensin-aldosterone system (RAAS) (inhibits the effects of angiotensin II), which leads to a more pronounced decrease in arterial pressure (BP) compared with that on the background of monotherapy for each drug.

Amlodipine, a dihydropyridine derivative, blocks the “slow” calcium channels and reduces the transmembrane current of calcium ions in cardiomyocytes and vascular smooth muscle cells. The antihypertensive effect of amlodipine is associated with a direct relaxing effect on smooth muscle of the arterial vessels. In preclinical studies, amlodipine had a more pronounced effect on vascular smooth muscle cells compared with cardiomyocytes. Amlodipine does not adversely affect the atrioventricular conductivity or myocardial contractility. It reduces the resistance of the kidney vessels and increases the renal blood flow.

Studies of amlodipine in patients with chronic heart failure (CHF) of functional class II-IV according to the NYHA classification (classification of the New York Heart Association) showed that amlodipine does not adversely affect exercise tolerance, ejection fraction, or plasma lipid and glucose concentrations blood. After a single dose of amlodipine inside, the action begins after 2-4 hours and lasts for 24 hours. The maximum antihypertensive effect is achieved no earlier than 4 weeks after the start of therapy. Amlodipine lowers blood pressure in patients who are in the "lying" and "sitting" positions, as well as during exercise. Due to the gradual development of the pharmacodynamic effect, amlodipine does not cause a sharp decrease in blood pressure or reflex tachycardia. Amlodipine reduces the severity of left ventricular hypertrophy. Hemodynamic effects remain unchanged with long-term use of amlodipine.

Losartan selectively blocks AT1receptors. Losartan and its pharmacologically active carboxylated metabolite (E-3174) as under conditions in vitroso in conditions in vivo block all the physiological effects of angiotensin II, regardless of the source or path of its synthesis.

Losartan does not possess the properties of an agonist and does not block the receptors of other hormones or ion channels involved in the regulation of cardiovascular activity. Losartan does not inhibit angiotensin-converting enzyme (ACE), which destroys bradykinin. Accordingly, it does not cause an increase in the frequency of undesirable effects mediated by bradykinin.

When administered in therapeutic doses, amlodipine is well absorbed. Maximum concentration (Cmax) in blood plasma is reached after 6-12 hours. Absolute bioavailability ranges from 64% to 80%. Eating does not affect the absorption of amlodipine.

Distribution Volume (Vd) is about 21 l / kg. Equilibrium plasma concentrations are reached after 7-8 days after the start of the drug. Binding to plasma proteins - 98%.

Amlodipine undergoes a slow, but active metabolism in the liver in the absence of a significant “first pass” effect. Metabolites do not have significant pharmacological activity.

The final half-life (T1/2) from blood plasma is 30-40 hours. Plasma clearance is 7 ml / min / kg. Approximately 60% of metabolites and 10% of amlodipine are excreted unchanged by the kidneys, 20-25% through the intestines.

Pharmacokinetics of special groups of patients

After oral administration, losartan is well absorbed. Systemic bioavailability of losartan when administered orally is approximately 33%. Cmax losartan and its active metabolite in the blood plasma are reached after 1 hour and 3-4 hours, respectively.

Losartan and its active metabolite are 99% bound to plasma proteins (mainly albumin). Vd Losartan is 34 liters.

Losartan is metabolized during the "primary passage" through the liver to form an active carboxylated metabolite (E-3174) and other inactive metabolites.

Pharmacokinetics of special groups of patients

In patients with mild and moderate alcoholic cirrhosis of the liver, when taking losartan orally, the concentration of losartan and its active metabolite in the blood plasma increased 5 and 1.7 times, respectively, compared with similar indicators in young healthy male volunteers.

Arterial hypertension (to patients who are shown combination therapy with amlodipine and losartan).

Use of the drug Lortenza during pregnancy is contraindicated, when pregnancy occurs, you should immediately stop taking the drug.

Drugs (drugs) that affect the RAAS, can cause damage and death of the fetus and newborn when used in pregnant women. Described isolated cases of use of ACE inhibitors during pregnancy.

Depending on the duration of pregnancy, a stress test, a non-stress test, or the determination of the biophysical profile of the fetus can be used to assess the functional status of the fetus. Patients and the physician should be aware that oligohydramnios develops with irreversible damage to the fetus. Newborns whose mothers took ARA II during pregnancy should be under medical supervision, taking into account the risk of arterial hypotension, oliguria and hyperkalemia.With the development of oliguria, first of all, correction of blood pressure and renal perfusion is necessary. Exchange hemotransfusion or hemodialysis is necessary for the correction of arterial hypotension and / or for the replacement of renal function.

The use of drugs acting on the RAAS in the II and III trimesters of pregnancy can cause serious damage or even fetal death, so when planning a pregnancy or when it occurs, you should stop taking losartan and, if necessary, switch to alternative antihypertensive therapy with regard to the safety profile. Renal perfusion in the fetus, depending on the RAAS, develops from the second trimester of pregnancy, so the risk to the fetus increases when taking losartan in the second and third trimesters of pregnancy.

Use of the drug Lortenza is contraindicated during breastfeeding.

In some patients with the use of calcium channel blockers, reversible biochemical changes of the sperm head were noted. Clinical data on the potential effect of amlodipine on fertility is insufficient. It was reported that a study on rats revealed a side effect on the fertility of male rats.

In research in vitro and in vivo mutagenic properties of losartan not detected. Fertility and reproductive function of male rats receiving an oral dose up to

150 mg / kg / day, unchanged. With the introduction of doses of 100 mg / kg / day to female rats and more, a decrease in the number of corpus luteum, implants and embryos was observed.

Inside, 1 time per day, regardless of the time of eating, squeezed with a small amount of water.

The recommended dose of Lortenza is 1 pill per day.

In patients with reduced BCC (for example, due to treatment with high doses of diuretics, etc.), the initial dose of losartan should be reduced to 25 mg 1 time per day. In connection with the lack of a dosage of drug Lortenza containing 25 mg of losartan, this dose should be prescribed in losartan monotherapy.

Before using the drug Lortenza, it is necessary to restore the BCC and the sodium content in the blood plasma.

In patients with impaired function (less than 9 points on the Child-Pugh scale) in history, it is recommended to use lower doses of losartan. In connection with the lack of a dosage of drug Lortenza containing 25 mg of losartan, this dose should be prescribed in losartan monotherapy.

Use of the drug Lortenza is possible in patients with impaired liver function (less than 9 points on the Child-Pugh scale), who are recommended by the doctor to use losartan in a dose of 50 mg.

Elderly patients do not require dose adjustment of Loretenza, however, it is necessary to increase the dose carefully.

Lortenza should not be prescribed to children and adolescents under 18 years of age, as there are no data on the efficacy and safety of use in this group of patients.