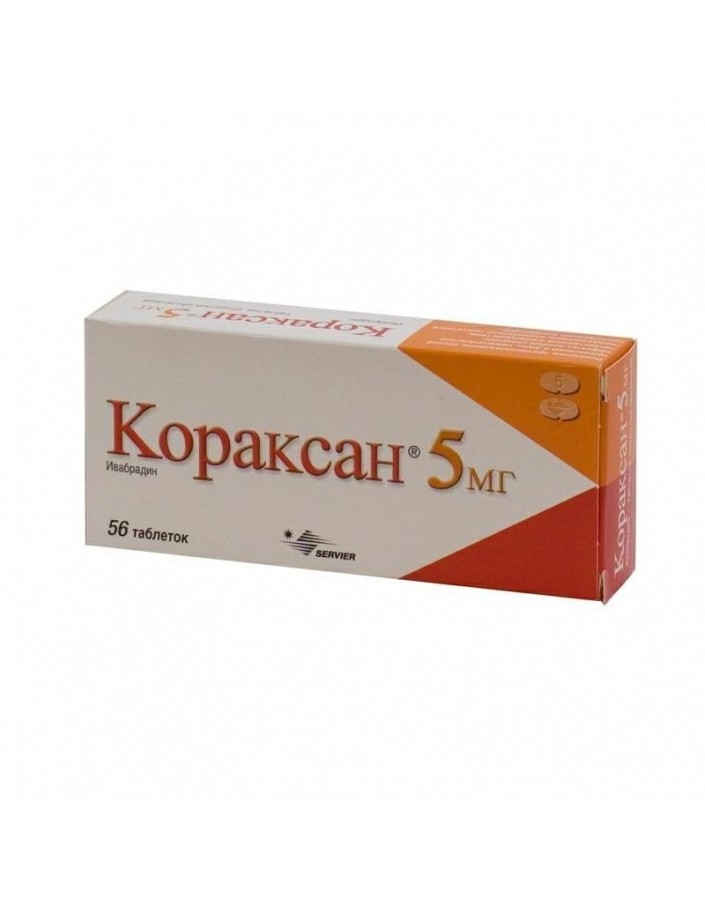 Treatment of stable angina in patients with normal sinus rhythm with intolerance or contraindications to the use of beta-blockers.

At the moment there are no data related to the use of Coraxan in pregnant women. In studies of the effect of the drug on reproductive function in animals, the embryotoxic and teratogenic effects of the drug were demonstrated. The potential risk of influencing the reproductive function in humans has not been established.Thus, Coraxan is contraindicated for use in pregnancy. In animal studies, it was found that ivabradine is excreted in breast milk. In this regard, the use of Coraxan during breastfeeding is contraindicated. Use in children and adolescents. Coraxan is not recommended for use in children and adolescents under 18 years of age, since its efficacy and safety have not been studied in this age group.

Coraxan is taken orally, with a double dosing regimen during the day, i.e. morning and evening with meals. The usual recommended starting dose of Coraxan is 10 mg / day (1 tab. 5 mg 2 times a day). Depending on the therapeutic effect, after 3-4 weeks of use, the dose of the drug can be increased to 15 mg (1 tab. 7.5 mg twice a day). If, during therapy, the heart rate decreases to less than 50 beats / min or the patient has symptoms associated with bradycardia (such as dizziness, fatigue, or arterial hypotension), a lower dose of the drug must be selected. If the decrease in the dose of Coraxan does not normalize the heart rate and remains at less than 50 beats / min, the drug should be withdrawn. Use in the elderly. The use of Coraxan in patients 75 years and older has been studied in a limited number of patients, therefore, for this age group, it is recommended to begin treatment with an initial dose of 2.5 mg (1/2 pills of 5 mg) 2 times a day; may increase the daily dose depending on the condition of the patient. Renal failure. With Cl creatinine above 15 ml / min, a normal dosing regimen is recommended.

With Coraxan therapy, it is recommended to conduct regular monitoring for the development of atrial fibrillation (paroxysmal or permanent). In case of clinical indications (for example, in case of complicated stenocardia, marked heartbeat, irregular heart rhythm), an electrocardiogram (ECG) should be included in the current control.

AV blockade II degree.Coraxan is not recommended for treatment with AV block II.

Use in patients with low heart rate. Coraxan is not recommended for patients who have a heart rate below 60 beats / min before prescribing.

If, during therapy, the heart rate decreases to less than 50 beats / min, or the patient has symptoms associated with bradycardia (such as dizziness, fatigue, or hypotension), a lower dose of the drug should be selected. If the decrease in the dose of Coraxan does not normalize the heart rate and remains at less than 50 beats / min, the drug should be withdrawn.

Combined use as part of antianginal therapy.The use of Coraxan in conjunction with BCA, slowing heart rate, such as Verapamil or diltiazem, is not recommended.

With the combined use of Coraxan with nitrates, BPC derivatives of the dihydropyridine series (such as amlodipine), no effect on safety and efficacy has been identified.

Stroke. It is not recommended to prescribe the drug immediately after a stroke, because There are no data on its use in this period.

Functions of visual perception (Visual function). Coraxan acts on the function of the retina. Currently, there is no evidence of the toxic effect of ivabradine on the reticular membrane of the eye. The effects of Coraxan on the retina with long-term use are not known today. In case of occurrence of violations of visual functions not described in the instructions, it is necessary to consider the issue of discontinuing Coraxan. The drug should be taken with caution in patients with retinal pigment degeneration (retinitis pigmentosa).

Excipients. The composition of the excipients of the drug includes lactose, so patients with intolerance to galactose, Lapp lactase deficiency or glucogalactose absorption taking the drug Coraxan is not recommended.

Hypotension. Because of the insufficient amount of clinical data, Coraxan should be used with caution in patients with mild and moderate arterial hypotension.

Coraxan is contraindicated in severe hypotension (DAD below 90 mm Hg and SBP below 50 mm Hg);

There is no evidence of the risk of developing bradycardia in patients receiving Coraxan when sinus rhythm is restored during pharmacological cardioversion. However, due to the lack of sufficient data, if it is possible to postpone DC-cardioversion, Coraxan should be stopped 24 hours before it is carried out.

Use in patients with congenital long QT interval syndrome or patients taking drugs that prolong the QT interval.

Coraxan should not be prescribed for congenital long QT syndrome, as well as when combined with drugs that slow the QT interval. If it is impossible to avoid therapy with Coraxan, a careful cardiocontrol should be performed.

Influence on ability to drive vehicles and to perform the works demanding high speed of psychomotor reactions.It was shown that the use of Coraxan mainly does not affect the ability to drive a car, but due to the possibility of photopsia, caution should be exercised when driving and / or performing work that requires a high speed of psychomotor reactions.

Combined use with drugs that extend the QT interval, can increase the decrease in heart rate, therefore, if necessary, a joint appointment should be carried out by careful cardiac monitoring.

The simultaneous use of potent inhibitors of cytochrome P450, such as antifungals group azoles (ketoconazole, itraconazole), macrolide antibiotics (clarithromycin, erythromycin, oral, josamycin, telithromycin), HIV protease inhibitors (nelfinavir, ritonavir) and nefazodone, Ketoconazole (in a dose of 200 mg 1 time per day) or josamycin (at a dose of 1 g 2 times a day), increase the average concentration of ivabradine in the blood plasma by 7–8 times.

Moderate CYP3A4 inhibitors. The combined use of ivabradine and hearth-reducing agents, diltiazem or verapamil, was well tolerated by patients and was accompanied by an increase in the concentration of ivabradine by 2–3 times, with an additional decrease in heart rate of about 5 beats / min.

This combination is not recommended.

Combinations that require caution when applying

Moderate CYP3A4 inhibitors. Simultaneous use of ivabradine with other CYP3A4 inhibitors (for example, fluconazole) should begin with an initial dose of 2.5 mg 2 times a day. With heart rate less than 60 beats./min, careful monitoring of heart rate is necessary.

Combined use with other drugs

It has been demonstrated no clinically significant effect on the pharmacodynamics and pharmacokinetics of ivabradine following drugs: inhibitors of proton pump (omeprazole, lansoprazole), inhibitors of phosphodiesterase-5 (sildenafil), inhibitors of HMG-CoA reductase inhibitor (simvastatin), BPC-derivatives of dihydropyridine (amlodipine, lacidipine ) Digoxin and Warfarin .

In a pilot phase III study, the use of the following medicines had no special restrictions, and therefore they can be administered in combination with ivabradine without special precautions: ACE inhibitors, angiotensin II receptor antagonists, diuretics, short and long-acting nitrates, HMG- inhibitors CoA reductase, fibrates, proton pump inhibitors, oral hypoglycemic agents, acetylsalicylic acid and other antithrombotic agents.

Treatment: symptomatic, is carried out in specialized departments. In the case of the development of bradycardia in combination with adverse changes in hemodynamic parameters, symptomatic treatment is shown with intravenous administration of beta-adrenomimetics, such as isoprenaline. If necessary, consider the possibility of temporary installation of an artificial pacemaker.

In the dark place at a temperature of no higher than 15 ° C.