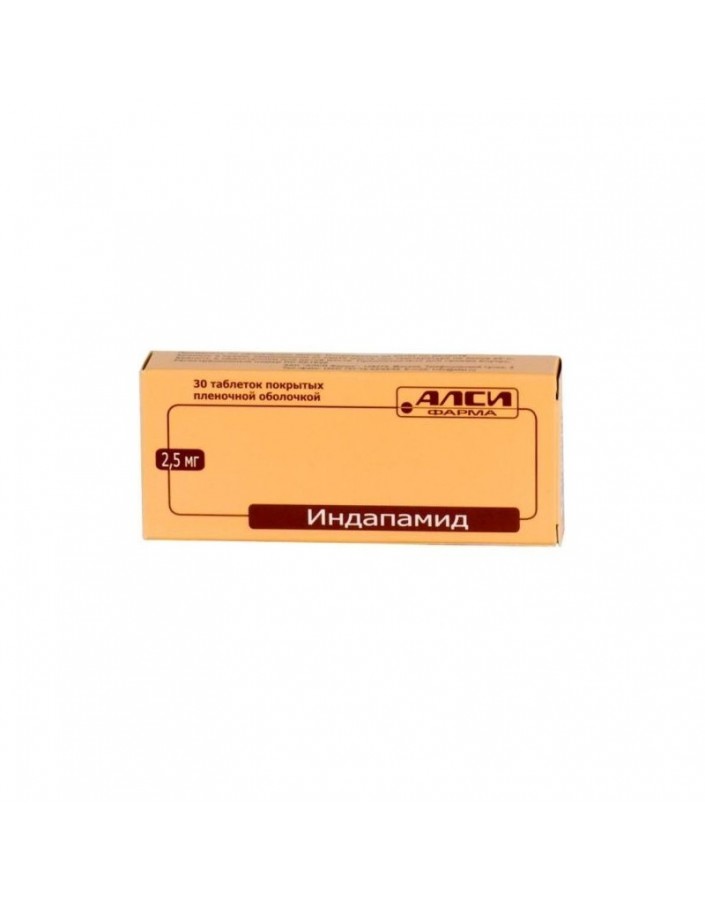 Thiazide-like diuretic, antihypertensive agent. It causes a decrease in the smooth muscle tone of the arteries, a decrease in OPSS, and also has moderate saluretic activity due to impaired reabsorption of sodium ions, chlorine and water in the cortical segment of the loop of Henle and the proximal convolution of the nephron tubule. The decrease in OPSS is due to several mechanisms: a decrease in the sensitivity of the vascular wall to noradrenaline and angiotensin II; increased synthesis of prostaglandins with vasodilating activity; by inhibiting the influx of Calcium ions into the smooth muscle elements of the vascular wall. In therapeutic doses, virtually no effect on lipid and carbohydrate metabolism.
The hypotensive effect manifests itself only with initially elevated blood pressure, develops by the end of the first week and reaches a maximum after 3 months of systematic administration.

After ingestion, it is quickly and completely absorbed from the gastrointestinal tract, the maximum concentration in plasma is reached in 1-2 hours. The binding to plasma proteins is 79%. Widely distributed in the body. Does not accumulate.
The elimination half-life is 18 hours. It is excreted by the kidneys mainly as metabolites, 5% - unchanged.

Is ingested by 2.5 mg 1 time / day (in the morning). With insufficient severity of the hypotensive effect after 2 weeks of treatment, the dose is increased to 5-7.5 mg / day.
Maximum dose: 10 mg / day in 2 divided doses (in the morning).

Acute violation of cerebral circulation, pronounced dysfunction of the kidneys and / or liver, severe diabetes and gout, hypersensitivity to indapamide.

Adequate and well-controlled studies of the safety of indapamide during pregnancy and lactation have not been conducted. Use in this category of patients is not recommended.

They are used with caution in patients with diabetes mellitus (glucose control is necessary, especially in the presence of hypokalemia), gout (an increase in the number of seizures is possible), in patients with indications of a history of allergic reactions to sulfonamide derivatives.
During treatment, it is necessary to control the level of electrolytes in the blood plasma (potassium, sodium, calcium).
Indapamide in the form of dragees and pills is included in the List of Vital and Essential Drugs.

With simultaneous use of indapamide with lithium preparations, it is possible to increase the concentration of lithium in the blood plasma; with astemizole, bepridil, Erythromycin (w / w), pentamidine, sultoprid, terfenadine, vincamine, quinidine, disopyramide, Amiodarone, bretilium, sotalolom - increases the likelihood of heart rhythm disorders like torsades de pointes; with NSAIDs (for systemic use) - may decrease the hypotensive effect of indapamide; with Baclofen, tricyclic antidepressants of the type of imipramine - an increase in the hypotensive effect of indapamide is noted; with other drugs that can cause hypokalemia, including with amphotericin B, gluco-and mineralocorticoid, tetrakozaktidom, laxatives - increases the risk of hypokalemia.