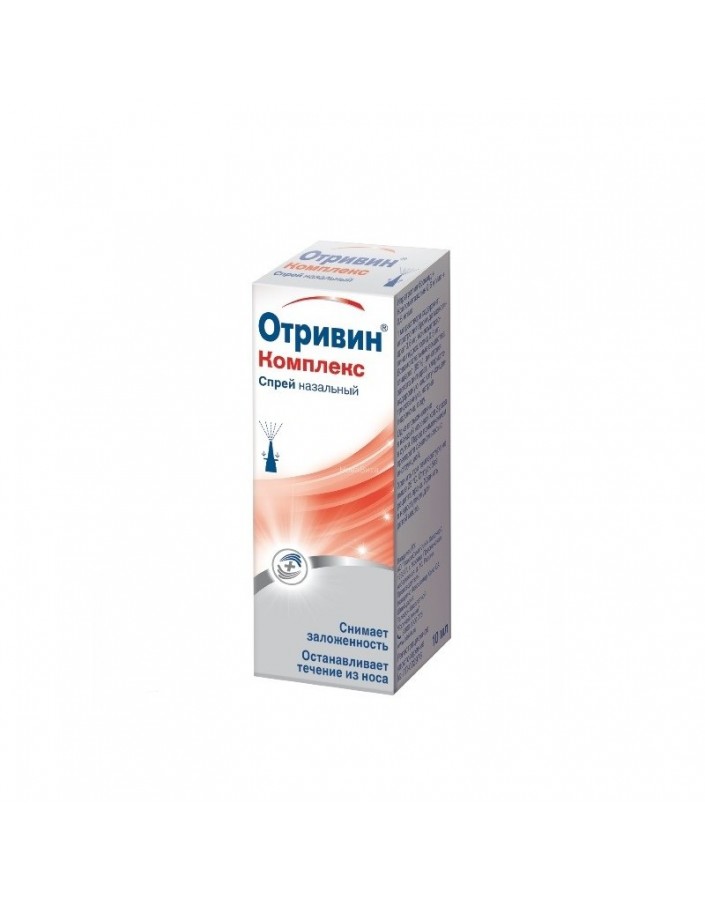 Transparent colorless or slightly colored solution with almost no odor.

Xylometazoline It belongs to the group of local vasoconstrictor agents (decongestants) with α-adrenomimetic action, causes constriction of the blood vessels of the nasal mucosa, thus eliminating the swelling and hyperemia of the nasopharyngeal mucosa. Relieves nasal congestion, facilitating nasal breathing with rhinitis.

Ipratropium bromide has anticholinergic effect. With intranasal use, it reduces nasal secretion, stopping hypersecretion of the glands of the nasal mucosa due to competitive inhibition of cholinergic receptors located in the epithelium of the nasal cavity. In therapeutic concentrations does not irritate the mucous membrane, does not cause its hyperemia.

The drug begins to act after 5-10 minutes and has a lasting effect for 6-8 hours.

With intranasal administration, ipratropium bromide and xylometazoline hydrochloride are little absorbed and are present in plasma in small quantities.

symptomatic treatment of edema and hyperemia of the nasal cavity;

hypersensitivity to the drug;

surgical interventions on the membranes of the brain (in history);

If the patient has one of the listed diseases, you should always consult with your doctor before taking the drug.

During pregnancy (II – III trimesters) and breastfeeding, the drug should be used only after a careful assessment of the benefit-risk ratio for the mother and the fetus; the recommended dosage is not allowed to exceed.

Respiratory: often - nosebleeds, irritation and / or dryness of the mucous membrane of the nasopharynx, burning sensation, tingling, sneezing, nasal hypersecretion; infrequently - nasal congestion (with frequent and / or long-term use of the drug).

If any of the above side effects are exacerbated or any other side effects that are not listed in the description are noticed, you should inform your doctor.

The drug is incompatible with MAO inhibitors, tri- and tetracyclic antidepressants.

Sympathomimetic drugs cause the release of catecholamines, incl. norepinephrine, which has a vasoconstrictor effect, resulting in increased blood pressure. With a significant increase in blood pressure treatment drug Otrivin® The complex should be abolished, symptomatic treatment.

Simultaneous use with tri- and tetracyclic antidepressants can enhance the sympathomimetic effect of xylometazoline.

For patients over the age of 18, take 1 injection in each nasal passage 3 times a day. The drug is used for no more than 7 days without consulting a doctor. Prolonged use of Xylometazoline may cause swelling of the nasal mucosa and increased secretion, due to the development of increased sensitivity of cells to the active ingredients of the drug, the so-called. the opposite effect.

One injection of the drug Otrivin® The complex contains about 70 mcg xylometazoline hydrochloride and 84 mcg ipratropium bromide.

When nasal use of the drug Otrivin® The complex acute overdose is unlikely, since drug absorption is extremely low.

Treatment: symptomatic therapy should be carried out under medical supervision.

Symptoms: with excessive use of ipratropium bromide overdose is unlikely, due to the extremely low absorption of the substance into the blood, but dry mouth, difficulty in accommodation, tachycardia can develop.

Significant overdose can cause symptoms associated with the anticholinergic effect of the drug on the part of the central nervous system, including hallucinations, to eliminate which cholinesterase inhibitors are prescribed.

Before use, you must clean the nasal passages.

It should not be used for a long time, such as chronic rhinitis.

Do not allow the drug to get into or around the eyes. In case of contact, there may be temporary blurred vision, irritation, pain, redness of the eyes, possibly the development of acute angle-closure glaucoma.It should be abundantly flush eyes with cold water in case of contact with the drug and consult a doctor if you have pain in the eyes or blurred vision.

Spray nasal, 0.5 mg / ml + 0.6 mg / ml. On 10 ml of a preparation in the bottle from PVP supplied with the pump dosing device with a tip from polypropylene and a protective cap from PE. The bottle is placed in a cardboard box.