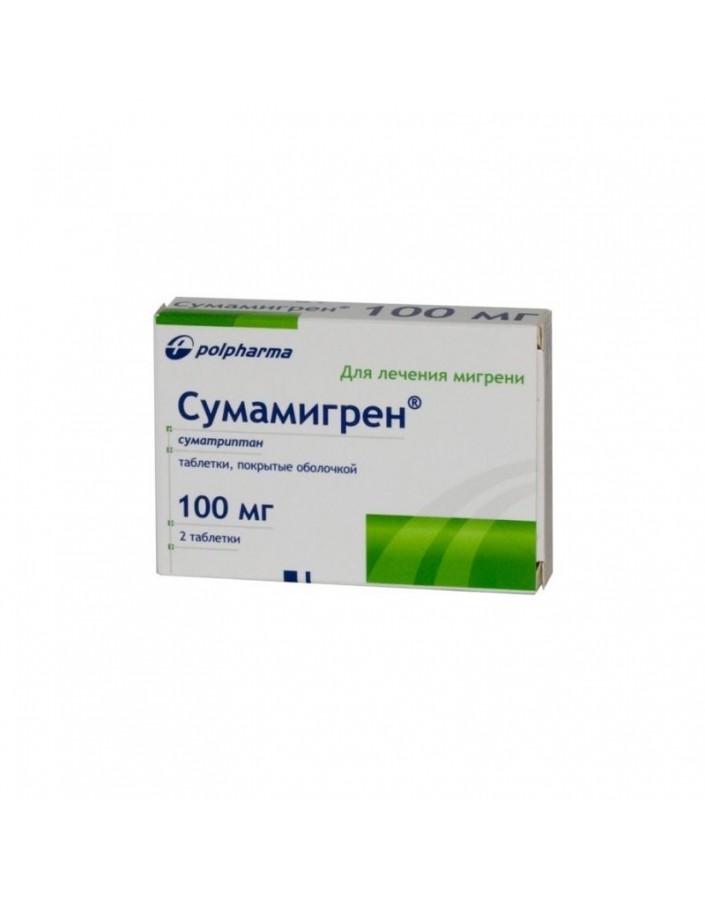 Sumamigren has an anti-migraine, serotonergic effect.

Relief of migraine attacks with or without aura.

Sumamigren take orally, swallowing the pill whole and squeezed water. The recommended dose - 1 table. (50 mg each). Some patients may require a higher dose - 100 mg.If the symptoms of migraine do not disappear and do not decrease after taking the first dose, then to stop the same attack you should not re-take Sumamigren. However, the drug can be used to relieve subsequent migraine attacks.

If the patient has improved after the first dose, and then the symptoms have resumed, the second dose can be taken within the next 24 hours. The maximum dose of sumatriptan should not exceed 300 mg during the 24-hour period.

General: pain, sensation of heat or tingling, feeling of constriction or heaviness. These symptoms are usually transient, but can be intense and occur in any part of the body, including the chest and throat.

On the part of the gastrointestinal tract: nausea, vomiting, ischemic colitis (but the connection of these side effects with sumatriptan has not been established); dysphagia, feeling of discomfort in the stomach.

On the part of the central nervous system and sensory organs: dizziness, rarely convulsive seizures (in some cases they were observed in patients with convulsions with a history or in conditions that predispose to seizures; in some patients, there were no predisposing factors).Sometimes after taking sumatriptan, diplopia, flickering before the eyes, nystagmus, scotoma, and decreased visual acuity are noted. Partially transient loss of vision is extremely rare. However, it should be borne in mind that visual impairment may be associated with the migraine attack itself.

On the part of laboratory parameters: minor changes in the activity of hepatic transaminases.