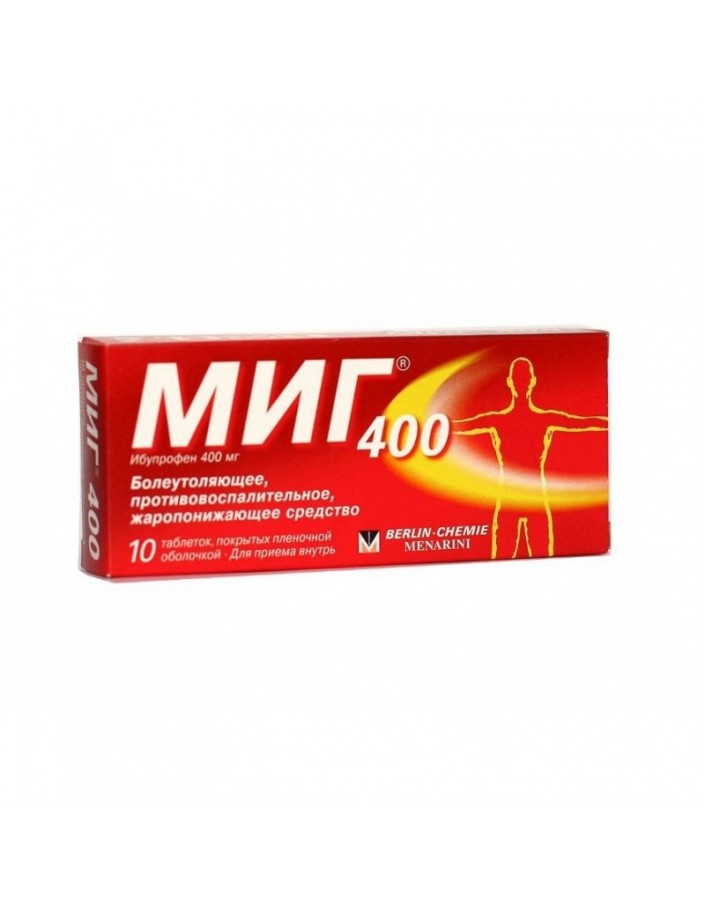 The drug is approved for use as a means of non-prescription Tablets, coated white or almost white, oval, with a two-sided risk of division and embossed "E" and "E" on both sides of the risks on one side.
1 tab.
ibuprofen 400 mg

The drug is approved for use as a means of non-prescription
tablets, coated 400 mg: 10 or 20
The description of the medicinal product MIG 400 is based on officially approved instructions for the use of the drug MIG 400 for specialists and approved by the manufacturer for the 2008 edition.

Indications for use of the drug MIG 400

- pain in muscles and joints;

The drug is taken orally.Dosing regimen set individually depending on the evidence.

For adults and children over 12 years old, the drug is usually prescribed in an initial dose of 200 mg 3-4. To achieve a rapid therapeutic effect, the dose can be increased to 400 mg. 3 When the therapeutic effect is reached, the daily dose is reduced to 600-800 mg.

In patients with impaired renal function, liver or heart, the dose should be reduced.

On the part of the digestive system: NSAIDs-gastropathy - abdominal pain, nausea, vomiting, heartburn, loss of appetite, diarrhea, flatulence, constipation; rarely, ulceration of the gastrointestinal tract mucosa, which in some cases is complicated by perforation and bleeding; possible irritation or dryness of the oral mucosa, pain in the mouth, ulceration of the mucous membrane of the gums, aphthous stomatitis, pancreatitis, hepatitis.

On the part of the senses: hearing loss, ringing or tinnitus, toxic lesion of the optic nerve, blurred vision or double vision, scotoma, dryness and eye irritation, conjunctival edema and eyelid (allergic origin).

With prolonged use of the drug in high doses increases the risk of ulceration of the gastrointestinal tract mucous membrane, bleeding (gastrointestinal, gingival, uterine, hemorrhoidal), visual impairment (color vision disorders, scotomas, damage to the optic nerve).

Contraindications to the use of the drug MIG 400

- erosive and ulcerative diseases of the organs: GIT (including gastric ulcer and duodenal ulcer in the acute phase, Crohn's disease, UC);

- hemophilia and other bleeding disorders (including hypocoagulation), hemorrhagic diathesis;

- diseases of the optic nerve;

- hypersensitivity to Acetylsalicylic acid or other NSAIDs in history.

The drug should be used with caution in the following cases: old age; heart failure; arterial hypertension; cirrhosis of the liver with portal hypertension; hepatic and / or renal failure, nephrotic syndrome, hyperbilirubinemia; peptic ulcer of the stomach and duodenum (in history), gastritis, enteritis, colitis; blood diseases of unknown etiology (leukopenia and anemia).

Use of MIG® 400 during pregnancy and lactation

Adequate and strictly controlled studies of the safety of ibuprofen in pregnancy are not available. The drug is contraindicated for use during pregnancy and lactation (breastfeeding).

The use of ibuprofen can negatively affect female fertility and is not recommended for women planning a pregnancy.

Ibuprofen can increase the activity of liver enzymes. During treatment, control of the functional state of the liver is necessary.

During treatment, control of the functional state of the kidneys is necessary.

The drug should be kept out of the reach of children, protected from light, at a temperature not exceeding 30 ° C. Shelf life - 3 years.
Manufacturer:
BERLIN-CHEMIE
BERLIN-CHEMIE