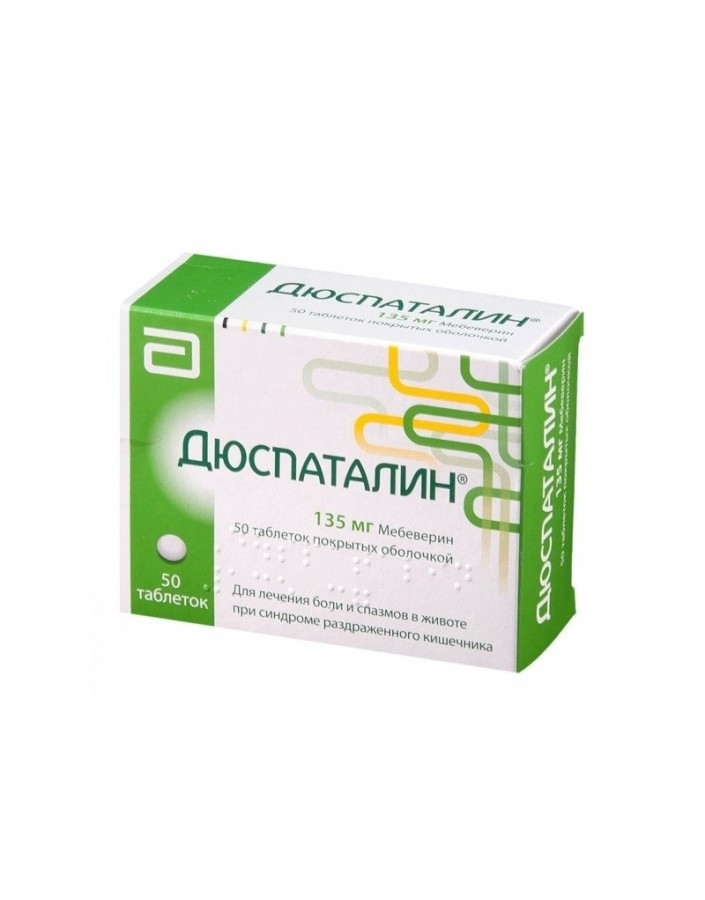 Coated tablets. Indications for use:Symptomatic treatment of pain, spasms, dysfunction and discomfort in the intestine associated with irritable bowel syndrome. Symptoms may include abdominal pain, cramps, bloating and flatulence, changes in stool frequency (diarrhea, constipation or alternating diarrhea and constipation), changes in stool consistency. Contraindications: Hypersensitivity to any component of the drug. Age up to 18 years. Congenital intolerance to galactose (lactose) or fructose, lactase deficiency, deficiency of sucrase / isomaltase, glucose-galactose malabsorption syndrome. Pregnancy and breastfeeding period.Use during pregnancy and during breastfeeding, the effect on fertility: Pregnancy: there are only very limited data on the use of mebeverin in pregnant women. It is not recommended to use Duspatalin® during pregnancy. Breastfeeding period: information on the excretion of mebeverine or its metabolites in breast milk is not enough. Do not take Duspatalin ® while breastfeeding. Fertility: there are no clinical data on the effect of the drug on fertility in men or women, but known animal studies have not demonstrated the adverse effects of Duspatalin®. Dosage and administration: For oral administration.Tablets need to be swallowed without chewing, drinking a sufficient amount of water (at least 100 ml). One pill 3 times a day, approximately 20 minutes before meals. The duration of the drug is not limited. If the patient has forgotten to take one or more doses, the drug should be continued with the next dose. One or more missed doses should not be taken in addition to the usual dose. Changes in dosing regimen in elderly patients and patients with renal and / or liver failure are not required. Side effect:On the part of the skin: urticaria (allergic rash), angioedema (a serious allergic reaction that may include: difficulty breathing, swelling of the face, neck, lips, tongue, throat), swelling of the face, exanthema (skin rash), from the immune system : hypersensitivity reactions (anaphylactic reactions - serious allergic reactions, which may include: difficulty breathing, rapid pulse, a sharp decrease in blood pressure (weakness and dizziness), sweating).A list of all side effects is provided in the instructions for medical use. Overdose:The observed symptoms of overdose were neurological and cardiovascular. The specific antidote is unknown. Symptomatic treatment is recommended. Gastric lavage is necessary only if intoxication is detected within approximately one hour after taking several doses of the drug. No suction reduction measures are required. Interaction with other drugs and other forms of interaction: Animal studies have demonstrated the absence of any interaction between Duspatalin® and ethyl alcohol. Special instructions:Before taking Duspatalin®, you should consult with your doctor if: for the first time, symptoms of the disease have occurred, unintended and unexplained weight loss, anemia, rectal bleeding or blood admixture in the stool, fever, if someone in your family has been diagnosed with colon cancer, celiac disease or inflammatory bowel disease, over the age of 50, and if the symptoms of the disease have occurred for the first time, recent use of antibiotics. Consult a doctor if the condition worsens or the symptoms do not improve after 2 weeks of use. Influence on ability to drive a car and other mechanisms: Pharmacological properties of the drug, as well as experience in its use do not indicate any adverse effect of mebeverin on the ability to drive a car and other mechanisms.