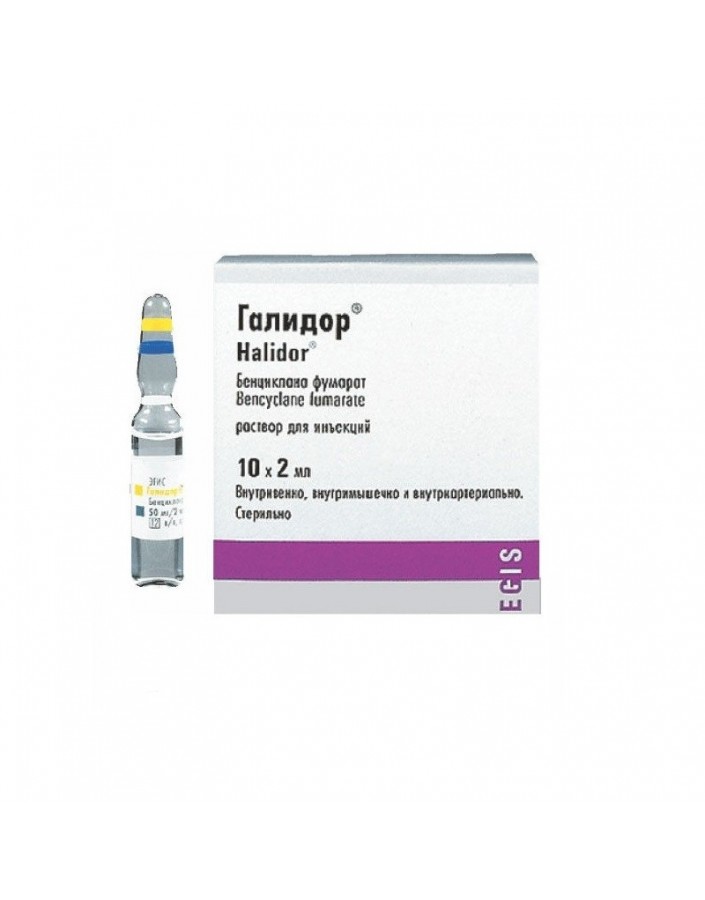 In 1 ml of solution for in / in and in / m injection contains: benzklana fumarat 25 mg.
Excipients: sodium chloride, water d / and.

In 1 ampoule 2 ml of solution. In 1 cell contour packaging 5 ampoules. In a cardboard bundle 2 packs.

Halidor - myotropic antispasmodic with a pronounced vasodilating action. The vasodilating action of the bentsklan is mainly associated with its ability to block Calcium channels, the antiserotonin action, and to a lesser extent with the blockade of sympathetic ganglia. Does not cause robbery syndrome, practically does not affect blood pressure. Bentsyklan can cause dose-dependent suppression of Na / K-dependent ATPase and platelet aggregation and erythrocytes, as well as increasing the elasticity of erythrocytes. These effects are observed mainly in peripheral vessels, coronary arteries and cerebral vessels. It has antiplatelet properties and mild local anesthetic activity. In addition, benziklan reduces the tone and motor activity of the smooth muscles of internal organs (gastrointestinal tract, urinary tract, respiratory organs). The drug causes some increase in heart rate.Its weak tranquilizing effect is also known.

- Peripheral vascular diseases (including Raynaud's disease, other diseases with acrocyanosis and vascular spasm, chronic arterial occlusive disease).
- Diseases of cerebral vessels (in the treatment of acute and chronic cerebral ischemia).
- To eliminate spasm of the internal organs: gastroenteritis of various etiologies (especially infectious), infectious colitis, functional diseases of the large intestine, tenesmus, postoperative meteorism, cholecystitis, cholelithiasis, post-cholecystectomy, motor impairment in sphincter Oddi dyskinesia, gastric ulcer or duodenal ulcer. in combination with other drugs;); spasms and tenesmus of the bladder, concomitant therapy of urolithiasis (in combination with analgesics for renal colic), preparation for instrumental methods of investigation.

Sufficient reliable studies on the use of the drug Halidor during pregnancy and lactation have not been conducted in humans. Therefore, the introduction of the drug in the first trimester of pregnancy is not recommended. During lactation, you should also refrain from prescribing the drug, or decide whether to stop breastfeeding during treatment. The data of preclinical studies did not reveal any embryotoxic or teratogenic effects.

Parenterally, the drug is administered intravenously (after dilution) or infusionally.
With vascular diseases The drug can be used infusion in a daily dose of 200 mg, divided into 2 administrations. Before the infusion, 100 mg (4 ml) of the drug is diluted in 100-200 ml of isotonic sodium chloride solution and injected into / into the drip for 1 hour 2 times / day.
To eliminate spasm of the internal organs in acute cases Halidor is administered intravenously in a jet at a dose of 100–200 mg (4–8 ml) or in a deep dose of 50 mg (2 ml). Before the on / in the introduction of the required amount of solution diluted with isotonic sodium chloride solution to 10-20 ml. The course of treatment is 2-3 weeks with the subsequent transfer of the patient, if necessary, to the drug Halidor for oral administration.

With the simultaneous appointment of Halidor with drugs that cause hypokalemia (diuretics, antihypertensive drugs); cardiac glycosides; drugs that inhibit myocardial function (beta-blockers, quinidine), the daily dose of Halidor should not exceed 150-200 mg. In case of parenteral administration, the injection sites should be changed, since The drug may cause damage to the vascular endothelium and thrombophlebitis. Patients with severe cardiovascular or respiratory failure predisposed to collapse, as well as prostatic hypertrophy and urinary retention (the degree of delay increases with the relaxation of the muscles of the bladder) should be avoided from parenteral administration of the drug.In case of ingestion of a solution of the drug under the skin, a local inflammatory tissue reaction is observed.
Control of laboratory parameters: With prolonged course application of Halidor, systematic (at least 1 time in 2 months) general blood analysis (counting of blood corpuscles) is recommended.
Influence on ability to drive motor transport and control mechanisms: during the period of treatment, care should be taken when driving vehicles and performing other potentially hazardous activities.

Symptoms: increase in heart rate, decrease in blood pressure, predisposition to collapse, impaired renal function, urinary incontinence, drowsiness, anxiety, hallucinations, in severe cases - epileptiform seizures (in elderly patients). Significant overdose can cause tonic and clonic convulsions. Allergic reactions.
Treatment: conducting symptomatic therapy. Benzodiazepines are recommended for the treatment of seizures. The specific antidote is not known. There is no data on the possible elimination of a benziklan by dialysis.