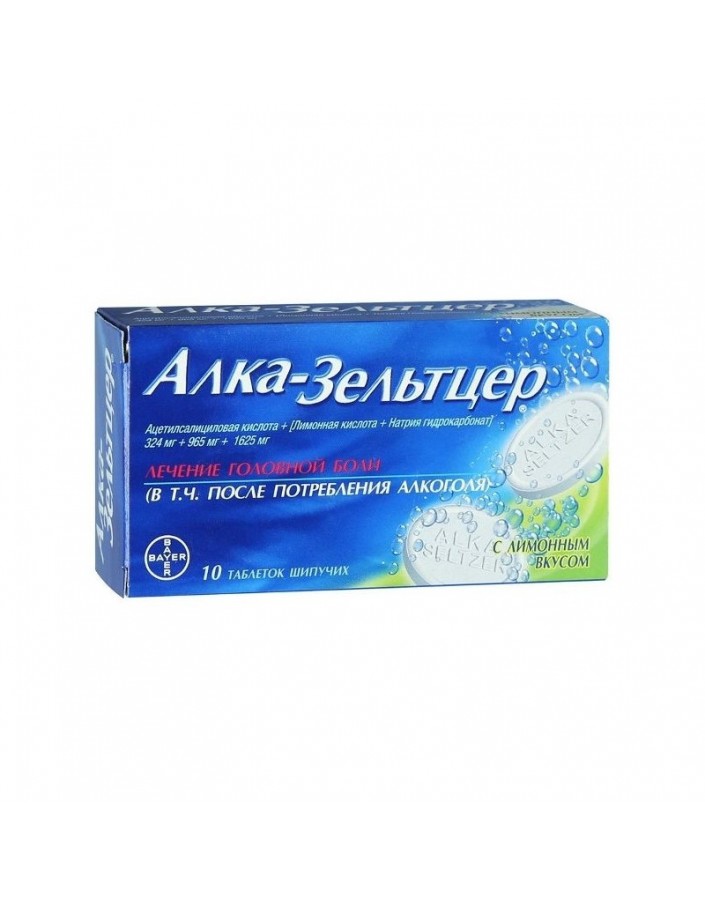 * a mixture of dimethicone and Calcium silicate in a ratio of 70:30.

** a mixture of sodium dusate and sodium benzoate in a ratio of 85:15.

Round, flat pills of white color, on one side “ALKA SELTZER” engraving in a convex circle protruding around the perimeter. The reverse side has a chamfer.

Combined medication, the action of which is due to its active ingredients.

Sodium bicarbonate neutralizes free hydrochloric acid in the stomach, which reduces the irritant effect of the drug.

After oral administration, ASA is quickly completely absorbed from the gastrointestinal tract. During the period of absorption and immediately after it, the ASC is converted into the main active metabolite - salicylic acid. ASA reaches its maximum plasma concentration in 10–20 minutes, and salicylic acid in 0.3–2 hours.

About 80% of ASA and salicylic acid binds to plasma proteins and is rapidly distributed in tissues. Salicylic acid is metabolized in the liver with the formation of metabolites - salicilurate, salicylovofenol glucuronide, salicylacyl glucuronide, gentisic and gentisuric acids. It is excreted into breast milk and passes through the placenta.

Elimination of salicylic acid is dose-dependent. The half-life varies from 2-

3 hours when taking the drug in low doses up to about 15 hours when using high doses. Salicylic acid and its metabolites are excreted mainly by the kidneys.

Symptomatic treatment of pain syndrome of mild and moderate severity: headache (including after alcohol consumption), toothache, sore throat, pain in the back and muscles, pain in the joints, pain during menstruation.

Increased body temperature for colds and other infectious and inflammatory diseases (in adults and children over 15 years).

Hypersensitivity to Acetylsalicylic acid and other NSAIDs or other components of the drug.

Erosive and ulcerative lesions of the gastrointestinal tract (in the acute phase).

The combined use of Methotrexate at a dose of 15 mg per week or more.

A complete and incomplete combination of bronchial asthma, recurrent nasal polyposis and paranasal sinuses and intolerance to acetylsalicylic acid or other nonsteroidal anti-inflammatory drugs (including a history).

The drug is not prescribed to children under 15 with acute respiratory infections caused by viral infections, due to the risk of Reye's syndrome

The drug is intended for adults and children over 15 years.

Inside, take a single dose of 1-3 pills (the interval between doses should be 4-8 hours).The maximum daily dose should not exceed 9 pills (3 g).

Method of application: to dissolve previously 1-3 pills in 1 glass (200 ml) of water.

The duration of treatment (without consulting a doctor) should not exceed 5 days when prescribed as an anesthetic and more than 3 days as an antipyretic.

From the side of the central nervous system: dizziness, tinnitus (usually are signs of overdose).

From the hemopoietic system: increased risk of bleeding, which is a consequence of the influence of acetylsalicylic acid on platelet aggregation.

When these symptoms appear, it is recommended to stop taking the drug and immediately contact your doctor.

with anticoagulants, such as Heparin : increases the risk of bleeding due to inhibition of platelet function, damage to the mucous membrane of the gastrointestinal tract, the displacement of anticoagulants (oral) from the connection with plasma proteins;

with other nonsteroidal anti-inflammatory drugs, as well as with large doses of salicylates (3 g per day or more): as a result of synergistic interaction, increases the risk of gastric and duodenal ulcers and bleeding from the gastrointestinal tract;

with Digoxin : digoxin concentration increases due to decreased renal excretion;

with drugs of the thrombolytic group: the risk of bleeding increases;

with diuretics: reduced glomerular filtration due to reduced prostaglandin synthesis;

with angiotensin converting enzyme inhibitors: at a dose of 3 g per day and more, glomerular filtration decreases due to inhibition of the action of prostaglandins and, as a result, the antihypertensive effect is reduced;

with ethanol: the risk of damaging effects on the mucous membrane of the gastrointestinal tract increases and the bleeding time increases.

Acetylsalicylic acid may increase the tendency to bleeding, which is associated with its inhibitory effect on platelet aggregation. This should be considered when surgical interventions are necessary, including small interventions such as tooth extraction. Before surgery, to reduce bleeding during the operation and in the postoperative period, the drug should be discontinued for 5-7 days and notified to the doctor.

Children can not prescribe drugs containing acetylsalicylic acid, because in the case of viral infection increases the risk of Reye's syndrome. Symptoms of Reye’s syndrome are prolonged vomiting, acute encephalopathy, and enlarged liver.

If necessary, the use of the drug during lactation breastfeeding should be discontinued.

Acetylsalicylic acid reduces the excretion of uric acid from the body, which can cause an acute attack of gout in predisposed patients.

One effervescent pill Alka-Seltzer contains 477 mg of sodium, which should be considered in a diet with controlled sodium intake.

The effect of taking the drug on driving a vehicle and other mechanisms has not been revealed.

Influence on ability to steer the car and moving mechanisms

3 years. Do not use after expiration date.