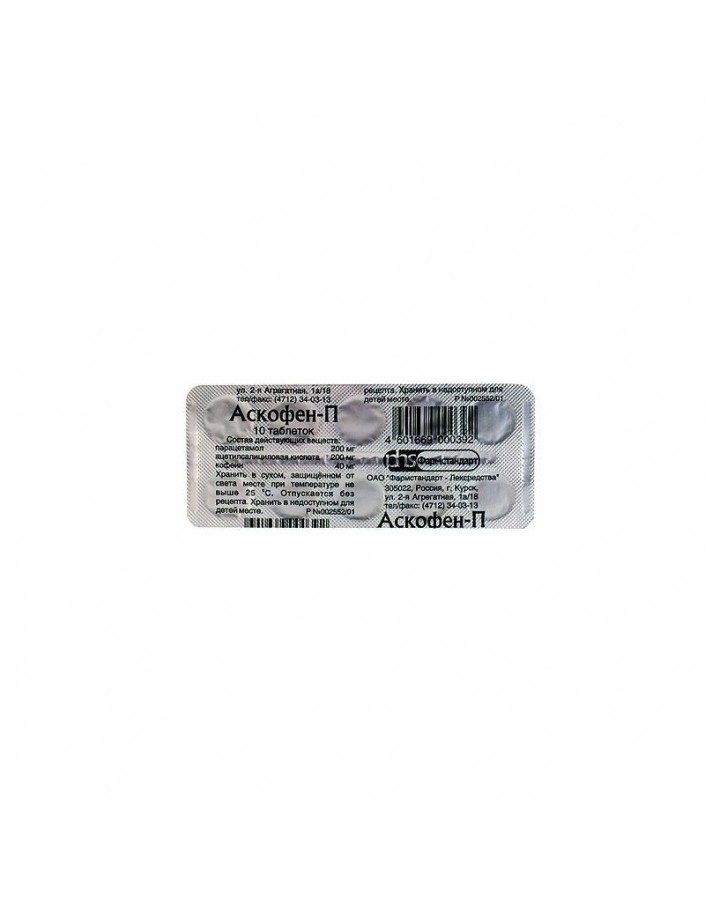 Paracetamol has analgesic, antipyretic and extremely weak anti-inflammatory effect, which is associated with its effect on the thermoregulation center in the hypothalamus and the weakly expressed ability to inhibit the synthesis of prostaglandins in peripheral tissues.

Caffeine increases the reflex excitability of the spinal cord, stimulates the respiratory and vasomotor centers, dilates the blood vessels of skeletal muscles, brain, heart, kidneys, reduces platelet aggregation; reduces sleepiness, fatigue, increases mental and physical performance.In this combination, a small dose of caffeine has little or no stimulating effect on the central nervous system, but it helps normalize the vascular tone of the brain and accelerate blood flow.

Inside after meals, washing down with plenty of liquid (milk, alkaline mineral water).

1-2 pills 3 times a day after meals. The maximum daily dose is 6 tablets. The break between taking the drug should be at least 4 hours.

For the relief of pain syndrome - 2 pills once.

Askofn P should not be taken for more than 5 days as an analgesic and more than 3 days as an antipyretic (without prescription and medical supervision). Other dosages and regimens are prescribed by a doctor.

In case of impaired renal or liver function, the interval between doses is at least 6 hours.

Children should not be prescribed drugs containing acetylsalicylic acid, because in the case of a viral infection they can increase the risk of Reye's syndrome. Symptoms of Reye’s syndrome are prolonged vomiting, acute encephalopathy, and enlarged liver.

The combination of the drug with barbiturates, antiepileptic drugs, zidovudine, rifampicin and alcohol-containing beverages should be avoided (increases the risk of a hepatotoxic effect).