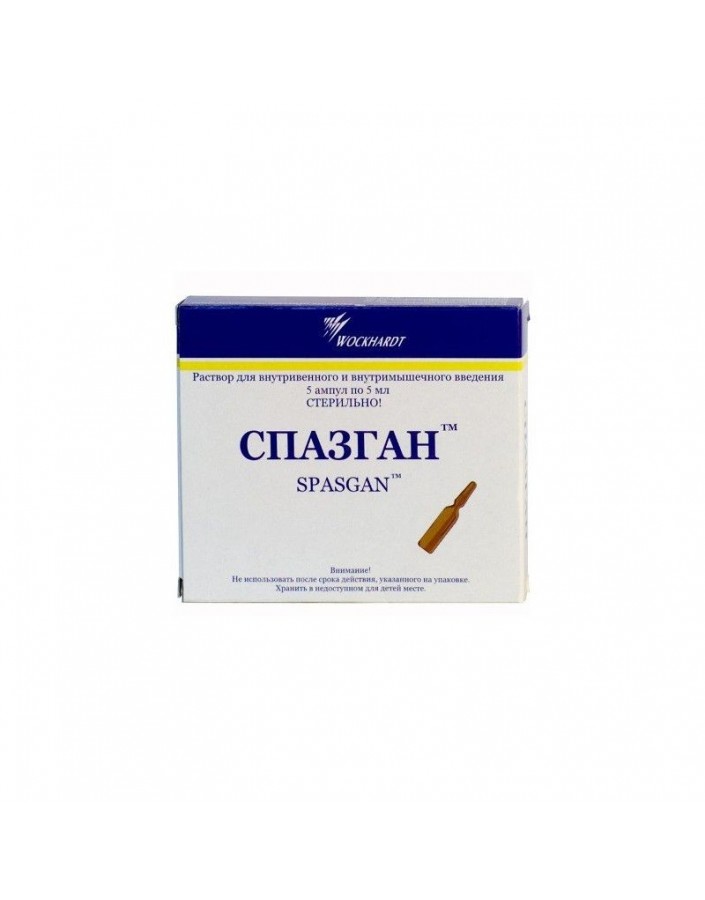 Trade name of the drug: Spazgan

Metamizole It has analgesic, antipyretic and weak anti-inflammatory effects. Pitofenon, like papaverine, has a direct myotropic effect on the smooth muscles of the internal organs and causes its relaxation.Fenpiverinium bromidedue to

M-holinoblokiruyuschego action has an additional antispasmodic effect on smooth muscles.

As an auxiliary drug: pain after surgery and diagnostic procedures.

- hypersensitivity to metamizole sodium and other derivatives of pyrazolone, as well as to other components of the drug;

- pronounced violations of the liver or kidneys;

Adults and adolescents over 15 years old with acute severe colic should be administered intravenously slowly in 2 ml (1 ml for 1 minute); if necessary, again after 6-8 hours. For slow intravenous administration, usually 2 ml of the preparation is sufficient.

Intramuscularly or intravenously Spazgan prescribed to children, depending on age and body weight in the following single doses:

If necessary, repeated administration of the drug in the same doses can be prescribed.

Solution is incompatible in one syringe with other medicines.

The duration of treatment for pain syndrome should not exceed more than 5 days and it is necessary to consult a doctor if symptoms persist or worsen.

Carefully and under the supervision of a physician, the drug should be used in patients with impaired liver or kidney function, with a tendency to hypotension, bronchial asthma, increased individual sensitivity to nonsteroidal anti-inflammatory drugs or non-narcotic analgesics, a complete or incomplete combination of asthma, recurrent nasal polyposis and okolonosovyh sinuses and intolerance Acetylsalicylic acid or other non-steroidal anti-inflammatory drugs (including a history).

For children and adolescents under 18 years old, the drug should be used only as prescribed by a doctor.

Perhaps dizziness, lowering blood pressure, tachycardia, cyanosis. With prolonged use, hematopoietic disorders: thrombocytopenia, leukopenia, agranulocytosis (may include the following symptoms: unmotivated rise in temperature, chills, sore throat, difficulty swallowing, stomatitis, and the development of symptoms of vaginitis or proctitis). With a tendency to bronchospasm may provoke an attack.

Local reactions: intramuscular injection may cause infiltrates at the injection site.

All side effects should be reported to your doctor.

The simultaneous use of spazgan with other non-narcotic analgesics can lead to mutual enhancement of toxic effects.Tricyclic antidepressants, oral contraceptives, Allopurinol violate the metabolism of metamizole sodium in the liver and increase its toxicity.

Barbiturates, phenylbutazone and other inducers of microsomal liver enzymes weaken the effect of metamizole sodium.

Simultaneous use with cyclosporine reduces the level of the latter in the blood.

Sedatives and tranquilizers enhance the analgesic effect of metamizole sodium.

When applied simultaneously with ethanol - mutual enhancement of effects.

Simultaneous use with chlorpropromazine or other phenothiazine derivatives may lead to the development of severe hyperthermia.

Radiocontrast drugs and colloidal blood substitutes should not be used during treatment with drugs containing metamizole sodium.

Metamizole sodium, displacing oral hypoglycemic drugs, indirect anticoagulants, glucocorticosteroids and Indomethacin from the association with plasma proteins , may increase the severity of their action.

Tiamazol and cytostatics increase the risk of leukopenia.

The effect of enhancing codeine, H2 - histamine blockers and propranolol (slows down the inactivation of metamizole sodium).

The injection solution is pharmaceutically incompatible with other drugs.

If necessary, the simultaneous use of these and other drugs should consult with your doctor.

Use during pregnancy is contraindicated. The use of the drug in nursing mothers requires the cessation of breastfeeding.

Do not use for relief of acute abdominal pain (until the cause is clarified).

During the period of drug treatment can not take alcohol; It is not recommended to drive vehicles or engage in other potentially dangerous activities that require the speed of physical and mental response.

Parenteral administration is usually used in case of emergency (renal or hepatic colic) and in cases where ingestion is not possible (or absorption from the gastrointestinal tract is impaired).

Special care is required with the introduction of 2 ml of solution and more (the risk of a sharp decrease in blood pressure). Intravenous injection should be performed slowly, in the prone position and under the control of blood pressure, heart rate and respiration rate.

With long-term (more than a week) use of the drug, control of the picture of peripheral blood and the functional state of the liver is necessary.

In the dark place at a temperature not higher than 25 ° C, do not freeze.