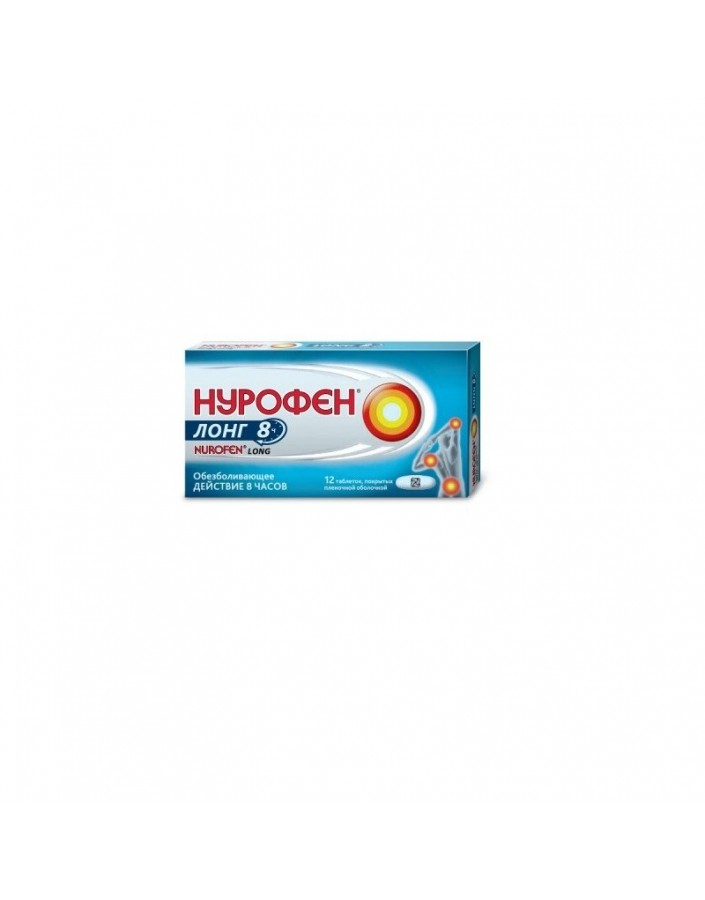 Capsule pills biconvex shape, film-coated from white to almost white color with pearlescent effect. A symbol is stamped on one side.

The drug is especially indicated for the symptomatic treatment of pain that requires a more pronounced analgesic effect than ibuprfen or paracetamol alone.

- Hypersensitivity to ibuprofen, paracetamol or other components of the drug.

- A complete or incomplete combination of bronchial asthma, recurrent nasal polyposis and paranasal sinuses, and intolerance to Acetylsalicylic acid or other NSAIDs (including in history).

- Erosive and ulcerative diseases of the gastrointestinal tract (including gastric ulcer and duodenal ulcer, Crohn's disease, ulcerative colitis) or ulcer bleeding in the active phase or in history (two or more confirmed episodes of peptic ulcer or ulcer bleeding).

- Bleeding or perforation of the ulcer of the gastrointestinal tract in history, provoked by the use of NSAIDs.

- Severe liver failure or liver disease in the active phase.

- Cerebrovascular or other bleeding.

- Hemophilia and other bleeding disorders (including hypocoagulation), hemorrhagic diathesis.

Carefully read the instructions before taking the drug.

For oral administration. For short term use only.

Adults and children over 12 years old: 1 pill up to three times a day with a glass of water. The interval between doses of the drug should be at least 6 hours.

The maximum daily dose for adults: 6 pills (corresponds to 1200 mg of ibuprofen, 3000 mg of paracetamol).

A treatment duration of no more than 3 days is recommended. If while taking the drug for 2-3 days the symptoms persist or worsen, it is necessary to stop treatment and consult a doctor.

The risk of side effects can be minimized if you take the drug in a short course, at the minimum effective dose necessary to eliminate the symptoms.

In older people, there is an increased incidence of adverse reactions against the background of the use of NSAIDs, especially Gastrointestinal bleeding and perforations, in some cases with a fatal outcome. Side effects are predominantly dose dependent. In particular Interaction:

- Antiemetics: decrease in the rate of absorption of paracetamol, while using it with Metoclopramide or Domperidone.

- Anticoagulants: long-term use of drugs containing paracetamol may enhance the effect of anticoagulants, in particular, Warfarin and increase the risk of bleeding.

- Kolestiramin: decrease in the rate of absorption of paracetamol, while applying with Kolestiramine.

The simultaneous use of ibuprofen with the following drugs should be avoided:

- Other NSAIDs, in particular, selective COX-2 inhibitors: the simultaneous use of two or more drugs from the NSAID group should be avoided due to the possible increase in the risk of side effects.

With caution to apply simultaneously with the following drugs:

- Antihypertensive drugs (ACE inhibitors and angiotensin II antagonists) and diuretics: NSAIDs can reduce the effectiveness of drugs in these groups. In some patients with impaired renal function (for example,in patients with dehydration or in elderly patients with impaired renal function, the simultaneous administration of ACE inhibitors or angiotensin II antagonists and cyclooxygenase-inhibiting agents can worsen renal function, including the development of acute renal failure (usually reversible). These interactions should be considered in patients taking coxibs concurrently with ACE inhibitors or angiotensin II antagonists. In this regard, the combined use of the above funds should be prescribed with caution, especially in the elderly. It is necessary to prevent dehydration in patients, as well as to consider the possibility of monitoring renal function after the start of such combined treatment and periodically in the future. Diuretics and ACE inhibitors can increase the nephrotoxicity of NSAIDs.

- Lithium preparations: there is evidence of the likelihood of increasing the concentration of lithium in the blood plasma during the use of NSAIDs.

- Methotrexate : there is evidence of the likelihood of increasing the concentration of methotrexate in the blood plasma during the use of NSAIDs.

- Cyclosporine: an increased risk of nephrotoxicity with the simultaneous appointment of NSAIDs and cyclosporine.

- Mifepristone: NSAIDs should be started no earlier than 8-12 days after taking mifepristone, since NSAIDs can reduce the effectiveness of mifepristone.

- Tacrolimus: with the simultaneous appointment of NSAIDs and tacrolimus may increase the risk of nephrotoxicity.

- Zidovudine: simultaneous use of NSAIDs and zidovudine can lead to increased hematotoxicity. There is evidence of an increased risk of hemarthrosis and hematomas in HIV-positive patients with hemophilia who received joint treatment with zidovudine and ibuprofen.

- Myelotoxic drugs increase the hematotoxicity of the drug.

spine, the risk of gastrointestinal bleeding depends on the range of doses and the duration of treatment.