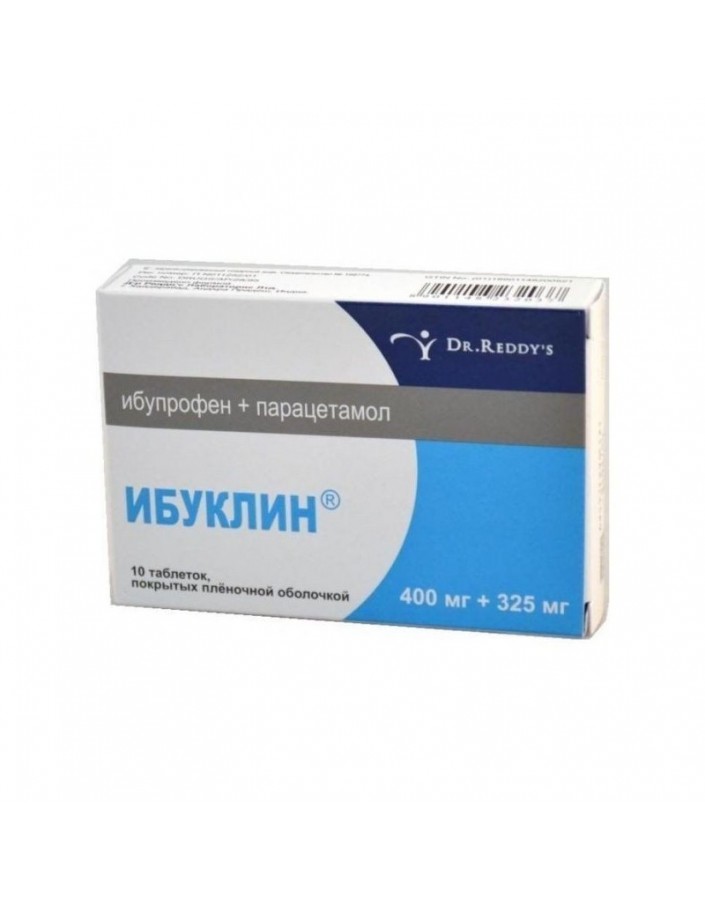 Anti-inflammatory, analgesic, antipyretic. Ibuclin weakens the excitability of the center of thermoregulation in the hypothalamus (paracetamol); inhibits the synthesis of PG (ibuprofen, paracetamol); stimulates the formation of endogenous Interferon (ibuprofen).

Ibuclin accept inside. Coated tablets: dosing regimen set individually depending on the evidence.

Adults and children over 12 years old: usually the initial dose - 1 tab. 3 times a day after meals.

When violations of the kidneys or liver break between doses - at least 8 hours.

Other: thrombocytopenia, impaired renal function and liver (with overdose).

The feasibility of using the drug as an antipyretic is solved in each case, depending on the severity, nature and tolerability of febrile syndrome.
To reduce the risk of adverse events from the gastrointestinal tract, use the minimum effective dose of the shortest possible course.
With the simultaneous use of indirect anticoagulants, it is necessary to monitor the indicators of the blood coagulation system.
It is necessary to avoid joint administration of the drug Ibuclin with other NSAIDs.
In order to avoid possible damaging effects on the liver during the period of taking the drug should not drink alcohol.
With prolonged (more than 5 days) intake of the drug, control of peripheral blood and the functional state of the liver is necessary.
The drug may distort the results of laboratory tests in the quantitative determination of glucose, uric acid in serum, 17-ketosteroids (the drug must be removed 48 hours before the study).

With simultaneous use of the drug Ibuclin® with drugs may develop various effects of the interaction.
Prolonged combined use with paracetamol increases the risk of nephrotoxic effects.
The combination with ethanol, glucocorticosteroids, corticotropin increases the risk of erosive and ulcerative lesions of the gastrointestinal tract.
Ibuprofen enhances the effect of direct (heparin) and indirect (coumarin and indandion derivatives) anticoagulants, thrombolytic agents (alteplase, anistreplaza, streptokinase, urokinase), antiplatelet agents, colchicine - the risk of hemorrhagic complications increases.
Enhances the hypoglycemic effect of insulin and oral hypoglycemic drugs.
Weakens the effects of antihypertensive drugs and diuretics (by inhibiting the synthesis of renal prostaglandins).
Increases blood concentration of Digoxin, lithium preparations and Methotrexate.
Caffeine enhances the analgesic effect of ibuprofen.
Cyclosporine and gold medications increase nephrotoxicity.
Cefamundol, cefoperazone, cefotetan, valproic acid, plykamycin increase the incidence of hypoprothrombinemia.
Antacids and colestyramine reduce the absorption of the drug.
Myelotoxic drugs contribute to the hematotoxicity of the drug.

Symptoms: gastrointestinal disorders (diarrhea, nausea, vomiting, anorexia, pain in the epigastric region), an increase in prothrombin time, bleeding in 12-48 hours, lethargy, drowsiness, depression, headache, tinnitus, impaired consciousness, heart rhythm disturbances, decrease in arterial pressure, manifestations of hepato-and nephrotoxicity, convulsions, hepatonecrosis may develop.
Treatment: gastric lavage during the first 4 hours; alkaline drink, forced diuresis; activated charcoal orally, the introduction of SH-group donators and precursors of glutathione-methionine synthesis 8–9 hours after an overdose, and N-acetylcysteine ​​orally or intravenously — after 12 hours, antacids; hemodialysis; symptomatic therapy. The need for additional therapeutic measures (further introduction of methionine, intravenous administration of N-acetylcysteine) is determined depending on the concentration of paracetamol in the blood, as well as on the time that has passed since taking it.

The drug should be stored in a dry, dark place at temperatures not above 20 ° C.