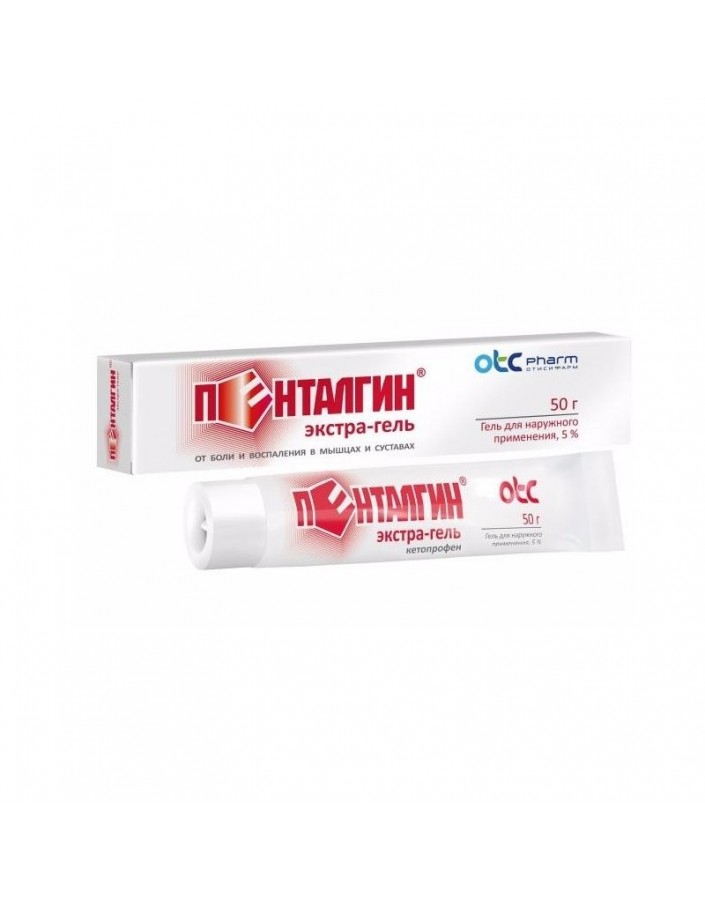 transparent or translucent homogeneous gel with a yellowish to reddish-brown color with a characteristic odor. The presence of opalescence and air bubbles.

Ketoprofen is a non-steroidal anti-inflammatory agent; when applied topically, it has analgesic, anti-inflammatory and anti-edema effects. The mechanism of action is associated with the suppression of the activity of the enzymes cyclooxygenase 1 and cyclooxygenase 2, which regulate the synthesis of prostaglandins.
When applied in the form of a gel, it provides a local therapeutic effect on the affected joints, tendons, ligaments, and muscles.
When articular syndrome reduces pain in the joints at rest and when moving, morning stiffness and swelling of the joints. It has no damaging effect on articular cartilage.

When applied topically in the form of a gel, it penetrates into the inflammatory focus through the skin and is absorbed from the inflammatory focus extremely slowly and practically does not accumulate in the body. Bioavailability of ketoprofen - about 5%.
After topical administration at a dose of 50-150 mg, the plasma concentration in 5-8 hours is 0.08-0.15 μg / ml.

- acute and chronic inflammatory diseases of the musculoskeletal system (inflammatory damage to the ligaments and tendons, osteoarthritis, osteochondrosis with radicular syndrome, sciatica, bursitis, sciatica, lumbago, articular syndrome with exacerbation of gout);
- muscle pain of rheumatic and non-rheumatic origin;
- post-traumatic inflammation of the soft tissues and the musculoskeletal system (damage and tears of the ligaments, bruises).
The drug is intended for symptomatic therapy, reducing pain and inflammation at the time of use, does not affect the progression of the disease.

- individual hypersensitivity to ketoprofen or other components of the drug;
- hypersensitivity to Acetylsalicylic acid or other nonsteroidal anti-inflammatory drugs (NSAIDs) (a history of bronchospasm, urticaria or rhinitis caused by the administration of acetylsalicylic acid), thiaprophenic acid and fenofibrate;
- complete or incomplete combination of bronchial asthma, recurrent nasal polyposis and paranasal sinuses and intolerance to acetylsalicylic acid or other NSAIDs (including a history of);
- hypersensitivity of the skin to the effects of solar radiation (photosensitization) in history;
- skin allergies in history of sunscreen or perfume;
- exposure to sunlight on the treated areas, including solarium, during the course of the drug and 2 weeks after;
- damage to the skin (oozing dermatosis, eczema, infected abrasions, wounds) at the site of the intended application;
- pregnancy (III trimester), breastfeeding period;
- children's age up to 18 years.

Erosive and ulcerative lesions of the gastrointestinal tract, severe violations of the kidneys and liver, hepatic porphyria, chronic heart failure, bronchial asthma, old age, pregnancy (I and II trimester).
If you have one of the listed diseases / conditions, be sure to consult your doctor before taking the drug.

The drug is intended for external use. The gel should be applied to clean, dry skin.A small amount of gel (3-5 cm) is applied in a thin layer, followed by gentle rubbing into sore or painful areas of the body.
The drug should be applied 2-3 times a day.
The duration of treatment should not exceed 14 days.

In case of accidental use of the drug in a dose that exceeds the recommended, the risk of overdose symptoms is minimal due to the extremely low systemic absorption of ketoprofen when used externally. If local side effects occur, the drug should be discontinued and the site should be washed. If accidental ingestion of large quantities of gel may cause systemic adverse reactions characteristic of NSAIDs. It is necessary to wash the stomach, taking activated charcoal. Interaction with other drugs The drug may enhance the effect of drugs that cause photosensitization. Despite the slight degree of absorption of ketoprofen through the skin, with frequent and long-term use, symptoms of interaction with other drugs may appear (the same as with systemic use). When used together with other NSAIDs, glucocorticoids, ethanol, corticotropin, ulcers can form in the gastrointestinal tract and the development of Gastrointestinal bleeding. Patients taking coumarin anticoagulants are advised to conduct regular monitoring of an international normalized ratio (INR).When combined, ketoprofen enhances the toxicity of Methotrexate. Dimethyl sulfoxide, which is part of auxiliary substances, enhances the penetration of drugs through the skin.

The gel should be applied only to intact skin, avoiding contact with open wounds, eyes and mucous membranes. Wash hands after application. Allowed the formation of a transparent film on the skin at the site of application of the gel. Do not use with occlusive dressings. Can be used with phonophoresis. Patients with severe renal, cardiac, or hepatic insufficiency should be careful when using Ketoprofen. Prolonged use of local remedies can lead to increased sensitivity and the appearance of symptoms of skin irritation at the site of application. In order to avoid manifestations of photosensitivity, it is recommended to avoid exposure of the skin to direct sunlight during the course of treatment, as well as after two weeks after the last use of the drug (including not going to the tanning bed). It is necessary to stop the use of the drug in case of any skin reaction, including reactions with simultaneous application of sunscreen or other cosmetic products containing organic octocrylene sunscreen.
With prolonged use of the drug in large quantities in very rare cases, the occurrence of systemic side effects (hypersensitivity reactions, disorders of the gastrointestinal tract, worsening of the course of renal failure) may occur. The risk of systemic side effects increases depending on the amount of gel applied, the area of ​​the treated skin area, the condition of the skin, and duration. Influence on the ability to drive vehicles and mechanisms The drug does not affect the ability to drive vehicles and work with mechanisms.

At a temperature not higher than 25 ºС. Keep out of the reach of children.

Do not use after the expiration date printed on the package.
Vacation conditions Without prescription.