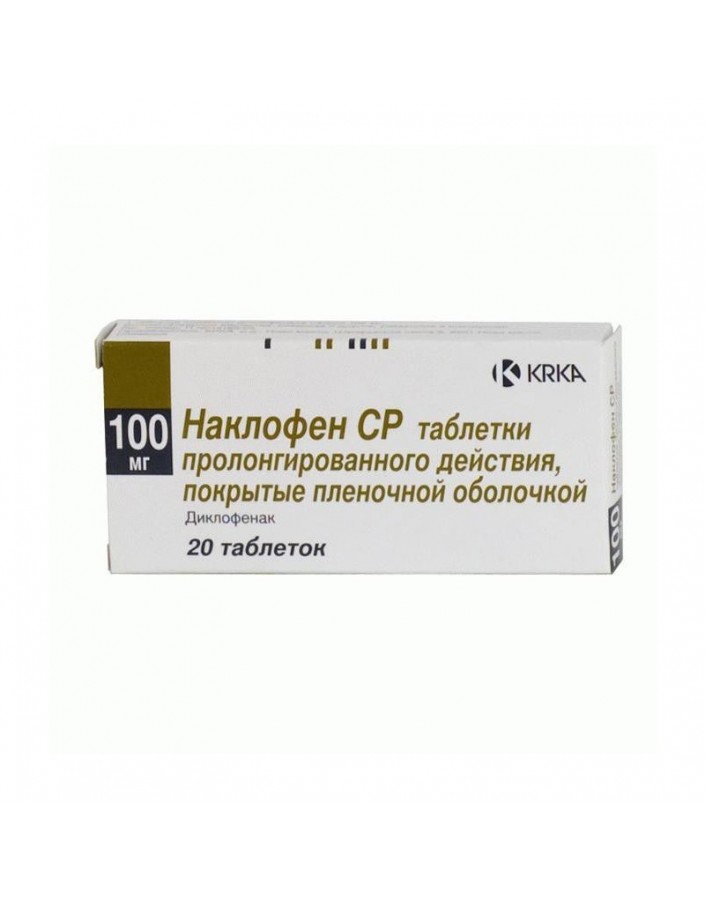 In the blister of 10 tablets. In carton pack 2 blisters.

The main mechanism of its action and the associated side effects are the indiscriminate inhibition of the activity of the cyclooxygenase 1 and 2 enzyme (COX 1 and COX 2), which leads to disruption of arachidonic acid metabolism, reduced synthesis of prostaglandins, prostacyclin and thromboxane. Synthesis of prostaglandins in the kidneys, gastric mucosa and synovial fluid is reduced.

At therapeutic doses, diclofenac has virtually no effect on bleeding time.

With long-term treatment, the analgesic effect of diclofenac is not reduced.

- Hypersensitivity (including to other NSAIDs), complete or incomplete combination of bronchial asthma, recurrent polyposis of the nasal mucosa and paranasal sinuses and intolerance to Acetylsalicylic acid or other NSAIDs (including in history).
- The period after coronary artery bypass surgery.
- Erosive and ulcerative changes of the mucous membrane of the stomach or duodenum 12, active Gastrointestinal bleeding.
- Inflammatory bowel disease (including ulcerative colitis (UC), Crohn's disease) in the acute phase.
- Cerebrovascular bleeding or other bleeding and impaired hemostasis.
- Severe liver failure or active liver disease.
- Severe renal failure (CC less than 30 ml / min), including confirmed hyperkalemia, progressive kidney disease.
- Decompensated heart failure.
- Inhibition of bone marrow hematopoiesis.
- III trimester of pregnancy, breastfeeding period.
- Children's age (up to 18 years).

The use of diclofenac in pregnant women is possible only when the expected benefit outweighs the potential risk to the fetus.

Diclofenac is not recommended for use during the last trimester of pregnancy.

Despite the fact that diclofenac is found in breast milk in small quantities, its use during breastfeeding is not recommended.

Inside, the pills should be swallowed whole, not chewed, squeezed with a sufficient amount of water during or after a meal.

Adults initial and maintenance doses are 1 pill per day. If necessary, increase the dose to 150 mg per day. Naklofen CP should be combined with 50 mg Naklofen pills or suppositories.

From the side of blood-forming organs: Very rarely - thrombocytopenia, leukopenia, eosinophilia, hemolytic and aplastic anemia, agranulocytosis.

On the part of the respiratory system: Rarely - cough, bronchial asthma (including shortness of breath). Very rarely - pneumonitis, laryngeal edema.

To reduce the risk of developing adverse effects on the gastrointestinal tract, a minimum effective dose of the shortest possible course should be used.

With caution should use the drug for ulcerative colitis and Crohn's disease due to possible exacerbation of the disease.

With prolonged use of diclofenac, it is possible, although in rare cases, the development of serious hepatotoxic reactions, and therefore, it is recommended to regularly examine the function of the liver. Due to the important role of prostaglandins in maintaining renal blood flow, special care should be taken when prescribing the drug to patients with cardiac or renal failure, as well as in the treatment of elderly people taking diuretics and patients who for some reason have a decrease in circulating blood volume after major surgery). If diclofenac is prescribed in such cases, it is recommended to monitor kidney function as a precautionary measure.

Precautions should be prescribed diclofenac in patients with severe renal or hepatic insufficiency, heart failure, coagulation disorders, porphyria, epilepsy, as well as in patients receiving anticoagulants or fibrinolytics. When conducting long-term therapy, it is necessary to monitor the picture of peripheral blood, to analyze the feces for occult blood.

Due to the negative effect on fertility, the drug is not recommended for women who want to become pregnant.In patients with infertility (including those undergoing examination), it is recommended to cancel the drug.

Patients taking the drug should refrain from drinking alcohol. In infectious diseases, the anti-inflammatory and antipyretic effects of diclofenac sodium can mask the symptoms of these diseases.

The amount of sucrose contained in the preparation does not affect patients with the following conditions: enzyme lactase deficiency, galactosemia and glucose / galactose impaired absorption syndrome.

Influence on the ability to drive a car or other mechanical means: During the period of treatment, the rate of mental and motor reactions may decrease, therefore it is necessary to refrain from engaging in potentially hazardous activities that require increased concentration of attention and speed of psychomotor reactions.

Reduces the effect of antihypertensives and hypnotic drugs.

Increases the likelihood of side effects of other NSAIDs and glucocorticosteroids (bleeding from the gastrointestinal tract), the toxicity of methotrexate and cyclosporine nephrotoxicity.

Acetylsalicylic acid reduces the concentration of diclofenac in the blood. Simultaneous use with Paracetamol increases the risk of the development of the nephrotoxic effects of diclofenac.

Reduces the effect of hypoglycemic drugs.

Cyclosporine and gold preparations increase the effect of diclofenac on the synthesis of prostaglandins in the kidneys, which is manifested by an increase in nephrotoxicity. Selective serotonin reuptake inhibitors increase the risk of bleeding from the gastrointestinal tract.

The simultaneous appointment with ethanol, colchicine, corticotropin and preparations of Hypericum perforatum increases the risk of bleeding in the gastrointestinal tract.

Drugs that cause photosensitization, increase the sensitizing effect of diclofenac to ultraviolet irradiation.

Anti-bacterial drugs from the quinolone group - the risk of seizures.