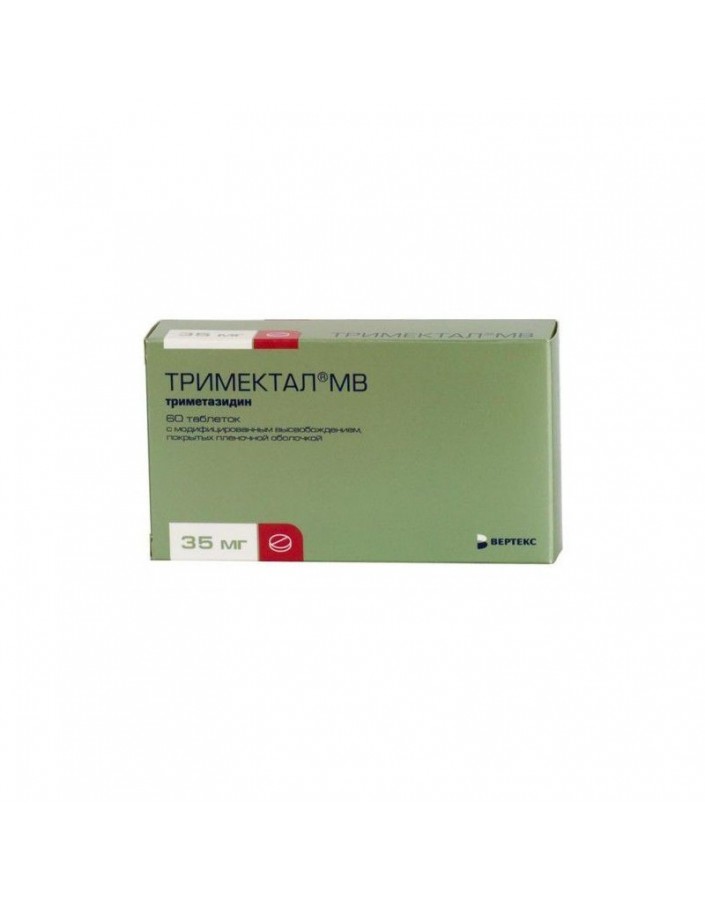 Tablets, film coated, almost white or white with a yellowish shade of color, round, biconvex.

Pharmacodynamics
Trimetazidine has an antihypoxant effect. Directly affecting the cardiomyocytes and neurons of the brain, trimetazidine optimizes their metabolism and function. The cytoprotective effect of trimetazidine is due to an increase in the energy potential, activation of oxidative decarboxylation and rationalization of oxygen consumption (increased aerobic glycolysis and blockade of fatty acid oxidation). Trimetazidine inhibits fatty acid oxidation by the enzyme 3-ketoacyl-CoA thiolase (3-CAT) mitochondrial long-chain fatty acid isoform, which leads to increased glucose oxidation and accelerated glycolysis with glucose oxidation, which causes myocardial protection from ischemia. Switching energy metabolism from fatty acid oxidation to glucose oxidation underlies the pharmacological properties of trimetazidine.
Trimetazidine supports myocardial contractility, prevents a decrease in the intracellular content of adenosine triphosphate (ATP) and phosphocreatine.Under conditions of acidosis, it normalizes the functioning of the ion channels of the membrane, prevents the accumulation of calcium and sodium ions in cardiomyocytes, and normalizes the intracellular content of potassium ions.
Trimetazidine reduces intracellular acidosis and elevated phosphate levels due to myocardial ischemia and reperfusion. Interferes with the damaging effects of free radicals, preserves the integrity of cell membranes, prevents activation of neutrophils in the ischemic area, increases the duration of electrical potential, reduces the release of creatine phosphokinase (CPK) from cells and the severity of ischemic myocardial damage.
Trimetazidine reduces dizziness and tinnitus. When vascular pathology of the eye improves the functional activity of the retina.
It was experimentally confirmed that trimetazidine has the following properties:
- supports the energy metabolism of the heart and neurosensory tissues during ischemia;
- reduces the severity of intracellular acidosis and changes in transmembrane ion flow arising during ischemia;
- reduces the level of migration and infiltration of polynuclear neutrophils in ischemic and reperfused cardiac tissues;
- reduces the size of myocardial damage;
- does not have a direct impact on hemodynamic parameters.
In patients with angina pectoris, trimetazidine:
- increases coronary reserve, thereby slowing the onset of ischemia caused by exercise, starting from the 15th day of therapy;
- limits the fluctuations in blood pressure (BP) caused by exercise, without significant changes in heart rate;
- significantly reduces the frequency of strokes and the need for taking short-acting Nitroglycerin;
- improves the contractile function of the left ventricle in patients with ischemic dysfunction.
The results of clinical studies confirmed the efficacy and safety of trimetazidine in patients with stable angina, both in monotherapy and as part of combination therapy with insufficient effect of other antianginal drugs.
Pharmacokinetics
Suction
After ingestion, trimetazidine is rapidly and almost completely absorbed in the gastrointestinal tract. Bioavailability - 90%.
The time to reach the maximum concentration in the blood plasma - 5 hours.
Over 24 hours, the concentration of trimetazidine in the blood plasma remains at a level exceeding 75% of the concentration determined after 11 hours.
The equilibrium state is reached after 60 hours.
Eating does not affect the bioavailability of trimetazidine.
Distribution
The volume of distribution is 4.8 l / kg, which implies a good diffusion of the distribution of trimetazidine in the tissues. Communication with plasma proteins is about 16% in vitro.
Removal
Trimetazidine is excreted mainly by the kidneys (about 60% - unchanged). The half-life of about 7 hours, in patients over 65 years old - about 12 hours.
The kidney clearance of trimetazidine correlates directly with creatinine clearance (CK), hepatic clearance decreases with the patient's age.
Easily penetrates histohematogenous barriers.
Pharmacokinetics in Special Patient Groups
Patients with impaired renal function
Exposure of trimetazidine on average was increased by 2.4 times in patients with moderately severe renal failure (CC 30-60 ml / min), and on average 4 times in patients with severe renal failure (CC less than 30 ml / min ) compared to healthy volunteers with normal renal function.
No safety features were found in this patient population compared to the general population.
Elderly patients
In patients older than 75 years, increased exposure to trimetazidine may be observed due to age-related decline in renal function.

Coronary heart disease: prevention of attacks of stable angina (as part of mono - or complex therapy).

- Hypersensitivity to any of the components of the drug;
- Parkinson's disease, symptoms of parkinsonism, tremor, restless legs syndrome and other motor disorders associated with them;
- renal failure severe severity (CC less than 30 ml / min);
- age up to 18 years (efficacy and safety have not been established).

Pregnancy
Data on the use of trimetazidine in pregnant women are not available.Animal studies have not revealed direct or indirect reproductive toxicity. Reproductive toxicity studies did not show the effect of trimetazidine on the reproductive function of rats of both sexes. As a precautionary measure, it is not recommended to use Trimectal&№174; MV during pregnancy.
Breastfeeding period
Data on the allocation of trimetazidine or its metabolites in breast milk are not available. The risk for a newborn / child cannot be excluded. Do not use the drug Trimektal&№174; MV during breastfeeding.

The drug should be taken orally, during the meal, not liquid, squeezed water.
Trimectal&№174; MV is prescribed 1 pill 2 times a day (in the morning and in the evening).
The duration of treatment is recommended by the doctor.
The maximum daily dose is 70 mg.
Special patient groups
Patients with impaired renal function
In patients with moderately severe renal failure (CC 30-60 ml / min), the daily dose is 35 mg during breakfast.
Elderly patients
In patients older than 75 years, increased exposure to trimetazidine may be observed due to age-related decline in renal function (see the Pharmacokinetics section).
Selection of the dose in patients older than 75 years should be done with caution (see section "Special instructions").

Classification of the incidence of side effects according to the recommendations of the World Health Organization (WHO):
very often> 1/10;
often from> 1/100 to <1/10;
infrequently from> 1/1000 to <1/100;
rarely from> 1/10000 to <1/1000;
very rarely <1/10000, including individual messages;
frequency is unknown - according to the available data it is not possible to establish the frequency of occurrence.
From the digestive system:
often - abdominal pain, diarrhea, dyspepsia , nausea, vomiting;
frequency unknown - constipation.
Common disorders:
often - asthenia.
From the side of the central nervous system:
often - dizziness, headache;
frequency is unknown - symptoms of parkinsonism (tremor, akinesia, increased tone), instability in the Romberg position and "shakiness" of the gait, restless legs syndrome, other motor disturbances associated with them, usually reversible after cessation of therapy; sleep disorders (insomnia, drowsiness).
From the skin:
often - skin rash, itching, urticaria;
frequency is unknown - acute generalized exantmatous pustules, angioedema.
Since the cardiovascular system:
rarely - palpitations, extrasystoles, tachycardia, marked reduction in blood pressure, orthostatic hypotension, which may be accompanied by general weakness, dizziness or loss of balance, especially while taking antihypertensive drugs, "flushes" of blood to the skin.
From the side of blood-forming organs:
frequency is unknown - agranulocytosis, thrombocytopenia, thrombocytopenic purpura.
Liver and biliary tract:
frequency unknown - hepatitis.

Currently, no cases of overdose have been reported.
In case of overdose, symptomatic therapy should be carried out.

In clinical studies of trimetazidine, it has been shown that it contributes to an increase in the anti-ischemic activity of other antianginal drugs.
No other interactions were observed.

The drug Trimektal&№174; MV is not intended for the relief of angina attacks and is not indicated for the initial course of treatment of unstable angina or myocardial infarction in the prehospital or in the first days of hospitalization.
In the case of an attack of angina, treatment should be reviewed and adapted (drug therapy or revascularization).
Trimetazidine can cause or worsen parkinsonism symptoms (tremor, akinesia, increased tone), so you should regularly monitor patients, especially the elderly. In doubtful cases, patients should be referred to a neurologist for appropriate examination. When motor disorders such as parkinsonism symptoms, restless legs syndrome, tremor, instability in the Romberg position and shakiness of the gait, trimetazidine should be permanently reversed. Such cases are rare, and symptoms usually disappear after discontinuation of therapy: in most patients, within 4 months after discontinuation of the drug. If the symptoms of parkinsonism persist for more than 4 months after discontinuation of the drug, you should consult a neurologist.There may be cases of incidence associated with instability in the Romberg position and "shaky" gait or a pronounced decrease in blood pressure, especially in patients taking antihypertensive drugs.
It should be used with caution to prescribe Trimectal&№174; MV for patients who may increase its exposure: patients with moderately severe renal failure (CK 30-60 ml / min), as well as elderly patients over 75 years of age.
Due to the dosage form of the drug Trimectal&№174; MV, film release tablets, film-coated, the pill cage may not dissolve in the intestine and stand out with feces, which does not affect the therapeutic efficacy of the drug.

Considering the possibility of the development of undesirable reactions from the central nervous system when taking Trimetazidine (see the “Side Effects” section), caution should be exercised when driving vehicles and other technical devices that require an increased concentration of attention and speed of psychomotor reactions.

Store in a dark place at a temperature not higher than 25 &№186;С.
Keep out of the reach of children.

Shelf life
Do not use after expiration date.